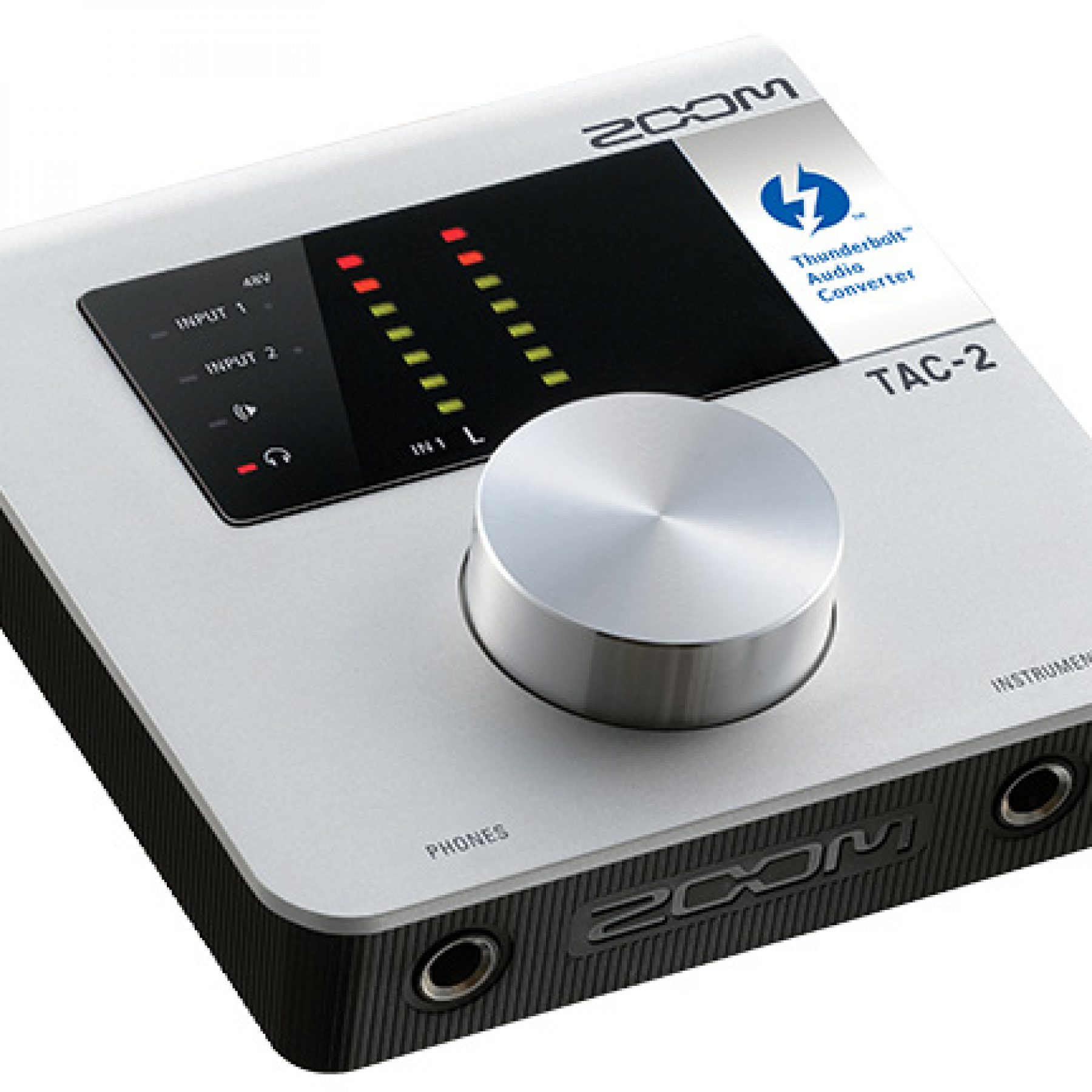 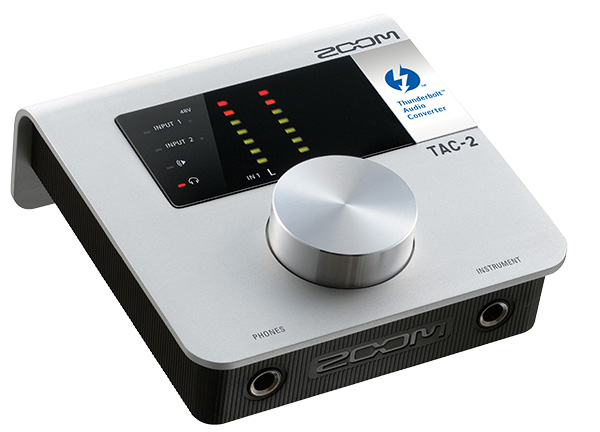 Zoom puts a Thunderbolt into the two-channel interface market.

I’m just going to make this easier on all of us: on the surface of it, Zoom has made what looks like a little Apollo Twin. Got that image in your head? Two-channel desktop interface with a single big knob, folded metal top plate and a Thunderbolt connection. Phew, glad we got that out of the way. Okay, let’s begin.

BOLT OUT OF THE GATE

The bolt side of the Thunderbolt is where Zoom is getting most of its bang for buck — bolt of speed, and a bolt of power.

The big sell of all the Apollo interfaces, including the Twin, is the ability to track through UAD plug-ins using onboard DSP — latency through your DAW doesn’t really matter with Apollo. But for the Zoom, and any other desktop interface, latency is a big deal. Why? Because most users will be using it to track everything from a DI with guitar amp simulators to vocals with onboard effects — and lag is a killer for tracking.

On the face of it, Thunderbolt’s impact on speed would seem negligible. Most two-channel interfaces run over USB 2.0, which is more than enough bandwidth for stereo I/O, even 24-bit/192k. But Thunderbolt’s 10Gb/s transfer rate seems to be doing its job here. Latency on a two-channel device such as this is down to the stability of the driver — especially when it’s under processing load. The TAC-2’s roundtrip latency (using the monitor outputs) was a low 132 samples (2.75ms at 48k), plus double whatever buffer you’re using. In practise, when recording direct into one of the inputs, latency was negligible for buffer settings up to 64 samples with a decent chain of plug-ins inserted — little enough latency to get intimate with compressed, effected vocals, and speedy enough to rip out virtuoso solos through an amp simulator without feeling behind.

The other side of it is bus power, Thunderbolt delivers 18V DC over the cable, compared to USB 2.0’s roughly 4.75V. More power means more choice, and in this case Zoom has opted for a higher spec preamp chip than you’d expect. I’m saying that in all deference to Zoom, as I’ve used its guitar pedals as a wet-behind the ears teen and I’m intimately acquainted with its portable recorders. Over the years Zoom has always packed in plenty of features for the price. Functionality has also been a strong suit for Zoom, and lately the development of the portable recorder range has shown a commitment to developing the sound and build quality side of the business too. It shows in the TAC-2. While the plastic, push-button knob isn’t the most confidence-inspiring piece of hardware, the metal faceplate, metering and balanced connectivity are all solidly fitted.

So what was that preamp? Well, it’s a Burr-Brown PGA2505, it’s slightly noisier than the PGA2500 chip you’ll find in Antelope, Prism, RME and other top manufacturer’s gear, but it has many of the same digitally-controlled feature set and sounds quite good. The Thunderbolt bus provides enough to power both channels and the headphone amp, which a USB bus would struggle to do. I do have better preamps around, but I’d have no problems tracking through the TAC-2 — it’s clean, handles low end well, and only gets noisy when pushed into silly territory. 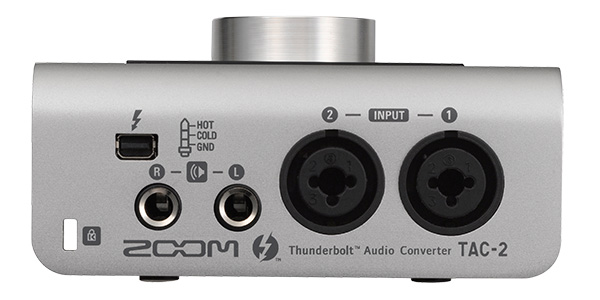 The TAC-2 is obviously Mac-only at this point, with Thunderbolt not really making any headway in the PC market. It’s also limited to stereo I/O, so there’s no separate headphone and monitor outputs, which you do get on the Apollo. I don’t see this as a big deal considering the style of tracking being done with this kind of interface.  There’s also no ADAT or similar expansion port. Again, this makes sense for this device. While the headphone amp doesn’t go super loud like the Apollo, it’s clean and I found it suitable.

In the box, you get a metre-long Thunderbolt cable, something you don’t get with the Apollo, and a $20 saving. There’s still no through port for Thunderbolt though. This is not a criticism of Zoom alone, it’s true of most Thunderbolt devices. It’s particularly annoying if your Macbook only has one port and you want to run an extra screen. But the big upside is the Thunderbolt bus-power that eliminates the need for a separate power supply.

The software control panel is very well thought out and simple to use. There are even arrows tracing the signal flow so you just have to follow your nose. The direct path links both preamp sections into the computer, the preamps also feed a mixer section where you can create a balance between the inputs and your computer’s playback for a monitor mix if you want zero latency monitoring, or have to raise your buffer settings. From there, you can set the level of your monitors or headphones and incorporate global reverb using a send control for each input and the computer playback. There are eight reverbs to choose from with two from each of Room, Hall, Plate and Echo.

The oddest function on the control panel is Loopback — a throwback to a time before desktop interfaces even existed. The gist is, instead of recording both channels direct, you tap the monitor mix instead, which can be any combination of both tracks, plus the computer playback and effects. The difference is, it all goes back into one mono or stereo track. The only real use I could see for this is laying down an initial bed track where you wanted to blend two mics you liked the sound of (say a ribbon and dynamic on a guitar amp), plus the reverb if you were particularly smitten. I say ‘initial’ because the monitor mix also feeds your headphones, so any amount of the computer playback you dial into your monitor mix will also be recorded on top of your new tracks in Loopback mode. Honestly, I’ve been over it a few times, and for the life of me I can’t really work out what you’d want this feature for unless you were particularly sold on the Zoom’s reverb quality — send me suggestions on a postcard.

Back to the parts that make sense. The metering is really solid, with a wide bar graph meter for everything, including computer playback and separate meters for headphones and monitoring. There are three preset memories, which are handy, dials and buttons for everything else — low cut filter, phase flip, and phantom per channel. There isn’t a pad option but the gain pot does have a unity gain setting.

The TAC-2’s gain range stretches from +9dB to +60dB, which is wide enough for most sources. However, one of the downsides of using the slightly cheaper Burr-Brown chip is that gain is set in 3dB steps.

Always sticklers for interesting functionality, one of the neatest things about Zoom’s device is the handy Auto-gain setting. By pressing the Auto button in the control panel and feeding it your signal, both channels simultaneously try to find the optimum gain setting for the material. You can also set the highest input to target 0dB, -6dB or -12dB — just bash, strum, or sing away and let the Zoom dial it in. I’ve slowly grown to appreciate auto gain-staging — having come across it more frequently on digital consoles — and the Zoom version works particularly well.

The hardware knob also lets you flick through setting levels for channel gain, monitor and headphone outputs with the knobs push-button selection. One of the stops allows you to adjust the two channel gains together if you have a stereo pair of something, or if you just want to raise or lower the overall system gain. It’s a nice touch, and well-implemented.

The Zoom TAC-2 is a really capable device. It might not carry the ‘UAD on-board’ designation, but with its super-low latency, you can track through your DAW’s plug-ins with no issues. If you’re after a good-sounding, two-channel interface for your Macbook that’s fast and without breakout cables, then this little unit could be the answer.