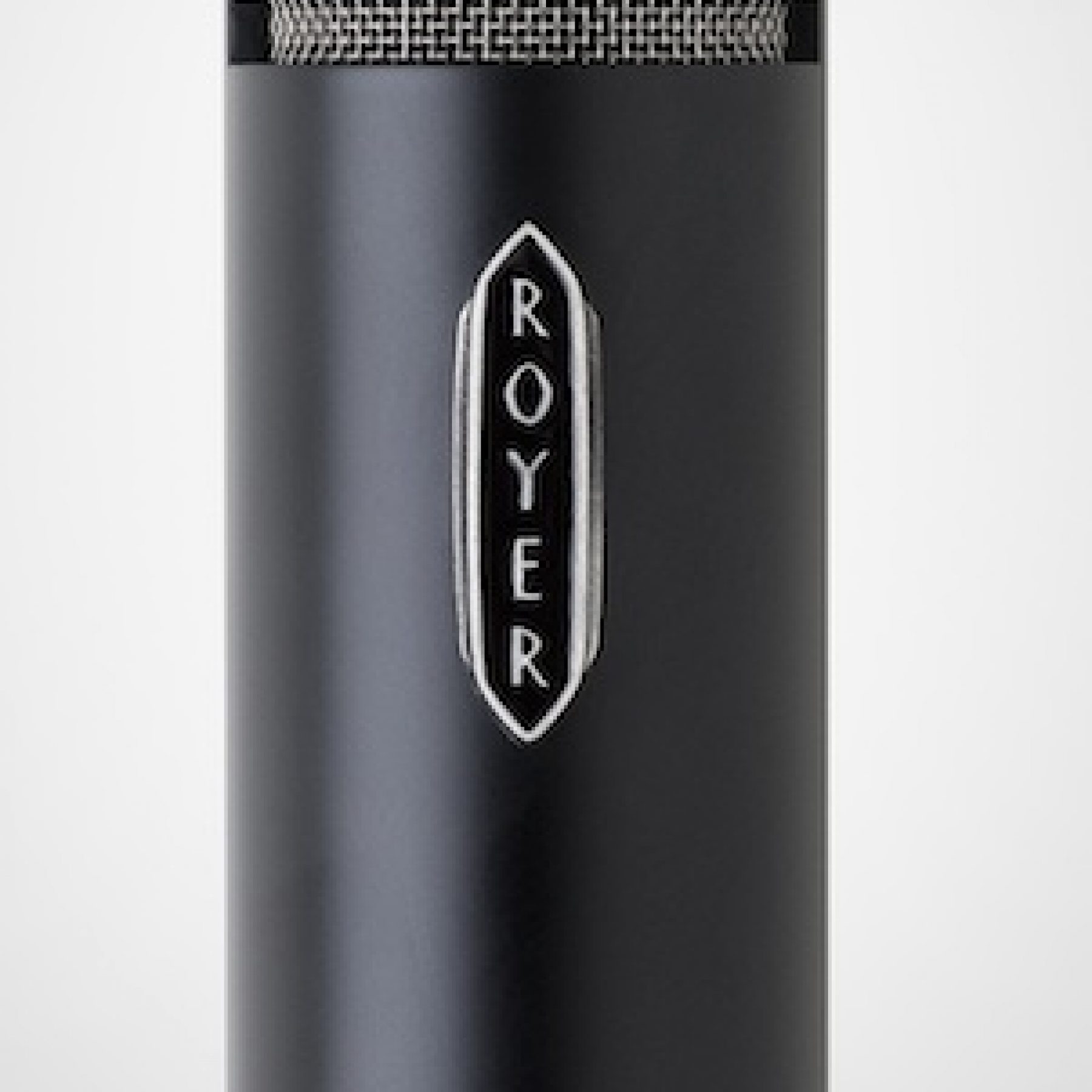 A new addition to the Royer stable is always worth a look-see.

Here we go again! As lucky beneficiaries of the great ‘Ribbon Wars’ of the early 21st century, the audio community is getting bombarded with quality ribbon mics on an almost daily basis. If it’s not louder, cooler looking or trickier somehow then it must be cheaper, and Royer’s new R-101 ribbon mic slots neatly into this last category (and that’s no bad thing by the way). While the R-101 may be cheaper, that’s a relative thing where Royer mics are concerned, and the 101 certainly doesn’t come off looking or sounding second best.

The R-101 is a chunky beast, built like a tank and very stylishly decked out in black. A silver mesh grille pokes through the series of concentric openings in the top third of the mic, giving it that unmistakable Royer signature. Gone are the Prince Charles ‘ears’ that stop the high-end models from rolling off the table but, as if to compensate, the R-101 is a tad bigger all round (200mm x 36mm) and a bit of a heavyweight at 483g. Inside the capsule lurks a 2.5 micron 99.99% pure (apparently) aluminium ribbon element and high-grade neodymium magnet assembly in Royer’s patented ‘Flux-Frame’ transducer. The passive capsule design delivers a figure-8 polar pattern that’s been optimised for close-up work with a maximum SPL of greater than 135dB, making it suitable for a variety of close-miking duties.

Like all its brethren in the ‘R’ series, the R-101 also features the offset-ribbon design which positions the ribbon element more towards the front (or logo side) of the mic, allowing the ribbon more space to move inside the prime magnetic field, thus improving its performance in high SPL situations. It also means there’s an ever so slightly brighter response from the back lobe of the mic. The R-101 also comes with an excellent and sturdy shock mount, a comprehensive and informative manual (which includes many tips on mic placement and signal processing), and a cute little black felt mic bag that you can slip over the mic at night to stop fairies from stealing pixie dust out of it. The whole package comes in a petite silver flight-case that reinforces the sense of the mic being a serious professional tool. More significantly, Royer also offers a lifetime guarantee to the original purchaser and one free re-ribboning service – excellent!

Taking the R-101 out of its case I was very impressed by its appearance and heft, and it wasn’t long before I had it plugged in and seeing active duty in the studio. I was a bit surprised by its relatively low output (being a tad lower than my somewhat outdated Oktava ML-53), but after trying various high-end mic pres and impedance settings I resigned myself to this limitation and put the issue to one side.

While cozy terms such as ‘warm’ and ‘mellow’ immediately spring to mind when describing the sound of the R-101, it’s important to note that all Royer ribbons also have a tendency towards unflinching honesty and this mic is no exception. If you’re recording in a large, lush sounding space the results can be amazing. Conversely, if you’re tracking in a suburban bedroom with carpet on the floor and a low-slung ceiling, that small boxy sound is exactly what this mic will throw back at you. It neither flatters nor deceives and there isn’t a hint of condenser zing or hype to be heard. It’s really in the midrange and the lower frequencies where ribbon mics do their best work and in this regard the Royer’s new offering has some interesting strengths and weaknesses.

The 101 has a very pronounced midrange character to it while not displaying the big bottom-end response of some older ribbons, giving it more of a ‘modern’ ribbon sound overall. This is no doubt partly to reduce the proximity effect which in turn allows the mic to do good things at close range, but I have to say I missed the bottom-end extension at various times while using it in the studio. On acoustic guitar it’s nevertheless sweet and warm while retaining soft detail in the higher registers. In this application, miking from a couple of feet or more away lets the room in a little and gives the performance a sense of occasion, which I really like. On vocals it’s fairly dark but certainly exudes a nice bit of old world charm with its emphasis on the middle registers, and for singers with a natural tendency towards brightness this mic is a beautiful fit. It also excels at backing vocals where a smooth and unobtrusive tone is required. The R-101 really shines up close on guitar amps and delivers lots of eminently useable low to upper midrange oomph while being slightly deaf to the nasties around 4 – 5kHz (a great advantage of ribbon mics in general).

On bass amps the Royer is also impressive. I used it several times about three to four metres away in conjunction with a close-miked dynamic to capture a bit of bloom from the amp and some room reflections, which worked a treat. I wasn’t so impressed with it as drum room mic though, where the 101 seemed to capture a pretty muted version of the energy of the kit with a lot of tubby mids and not a lot else. Even massive low-end EQ boosts didn’t really provide the sort of wallop I was expecting. The Royer was a bit of a revelation as a close mic on kick drum however, imparting a bit of ribbon magic to the kick sound while not chewing your ears off with snare and cymbal spill. For this application I followed the manual’s instructions to set the mic up two or three feet out from the kick drum with a pop shield, tilted slightly downwards to reduce stress on the ribbon element. This worked very nicely indeed.

On strings the Royer also worked a treat for conjuring up a soft, pillowy texture that sat beautifully in the mix. Indeed, I often found the R-101 naturally slotted the tracking it captured into a background/reinforcement role. On two separate occasions I had to improve existing sounds, once by adding real strings to a sampled orchestral arrangement, and once by adding subliminal extra acoustic guitars to a critical but slightly shaky original take, and the Royer was the perfect tool for this kind of work. The string arrangement came to life with the softer ‘old-Hollywood’ tonality of the real playing underneath the samples, while the acoustic guitar seemed to straighten out and move more easily with the subtle underpinning of the new overdubs. On both occasions the Royer’s gentle top end meant that any slight irregularities in the playing of the new parts didn’t jump out or get in the way, while the darker tone of the reinforcements added smoothing body and weight to the original parts. While not perhaps apparent on first listen, I’d say this ability to blend into the background is a real strength of the 101. Then again it’s only really a strength when you’ve a got a decent mic or two in the studio already so it depends a bit on the user. Quite often I found myself miking sources with both the 101 and something like a Neumann condenser or a Shure SM57 and mixing the signals to taste in fairly conventional fashion – sometimes abandoning the other mic altogether where the darker tone worked better, but often ending up somewhere around 50/50 for guitar amps, strings and other acoustic sources. I really liked the R-101 but didn’t always feel it had sufficient bite and wallop to cover all my bases. Having said that, it did give me some great results in tandem with another more traditional mic choices.

While words like ‘soft’ and ‘subtle’ do describe the sound of this mic, of course digital and/or analogue EQ is always within arms reach and the Royer responds well to this sort of treatment in most cases. Brightening up things like vocals and drums reveals quite a quick transient response and, as with most ribbons, there’s plenty to like about the top end of this ribbon when it’s judiciously unveiled. Unfortunately, for low-level sources in particular, opening up the top end with EQ also exposes the mic’s rather high noise floor. But whether this is a strength or weakness depends entirely on your source volume. I have to admit I’ve been pretty spoiled in recent times by some of the active ribbons I’ve billeted in my studio on behalf of AT lately, with their effortless high-gain outputs and low noise floors, so perhaps I’ve had unfair expectations of this new passive Royer by comparison. In the end this gain limitation really only becomes problematic when you’re recording low-level sources. The Royer R-101 has a highly desirable tone, smoldering dark looks and general flexibility as a studio tool. Just don’t try using it to record the sounds of mice scurrying in wall, that’s all.

While it’s not going to be the centrepiece of every recording, the R-101 has a great midrange tone and will no doubt provide character and colour to countless projects in the coming years, and for the right voice it could also be a smoking lead and backing vocal mic. The new price point brings a high-end brand within the reach of the more well-heeled home studio enthusiast and, for those with a few other condenser and dynamic options already in the mic cabinet, the R-101 could well be the perfect entry point into the wonderful world of Royer ribbon mic recording. PLAYING IN THE WET