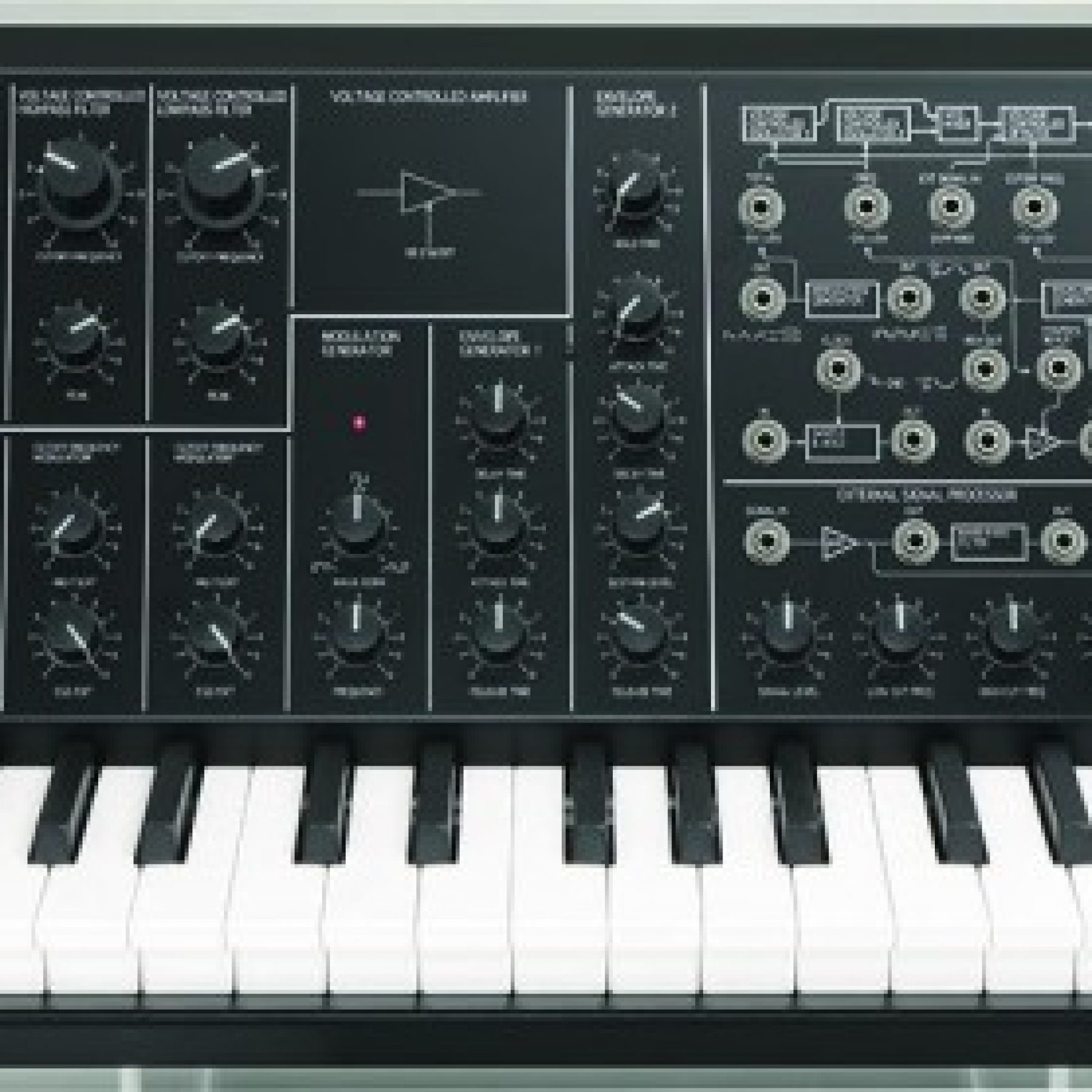 Who’d have thought Korg would go this far back to the drawing board. Some things need never change.

It’s difficult to decide where to begin with a review of Korg’s latest endowment to the synth-world: The MS-20 Mini. I don’t believe I’ve ever come across this situation. No synth manufacturer has gone to such extremes to recreate a 35-year old design, apart from perhaps, Moog, with its Minimoog Voyager Old School ‘Model D’ recreation. That said, the Voyager Old School included functions not possible with the original Minimoog, so it wasn’t a strict rebuild. And sure there’s been plenty of analogue modelling going on. Korg itself did a smashing job with the Korg Legacy Collection plug-ins and MS-20ic controller (more on this later), as it has also done with its analogue modelling synths such as the KingKorg I reviewed last issue. The other synthesis big-wig, Roland, has taken the path of paying homage to its vintage designs, with Juno, Jupiter and SH-101 style architecture and cosmetic regalia. Then there are the plethora of boutique modular analogue synth designs from the likes of Doepfer, Vermona and ADDAC (to name but a few — there are dozens more). These are hybrids in some respects, fusing 50-year old technology into modern variations. But as I mentioned, no manufacturer has gone to the extreme of rebuilding a synth to the original analogue specification — until now. Trust Korg to completely embrace its heritage. So I hope you understand my indecisiveness with this review, because in many ways this article could easily unfold as a review of the original Korg MS-20.

Most synthesis-heads would be aware of the genuine Korg MS-20 released back in 1978. In the day it was known as a poor man’s Moog, however, the MS-20 has since become part of analogue folklore, equally as collectable (albeit a third of the market value) as the Minimoog it was once seen as poor cousin to. So what made the MS-20 so popular? Well, to begin with it was semi-modular. In other words, alongside a set of onboard controls for the synthesis section, the MS-20 included a patchbay for shunting various modulation sources to various destinations. This increased the versatility of the unit no end, allowing the synth to be controlled by analogue sequencers such as Korg’s SQ-10 or to control modular synths such as the Korg MS-50, a keyboard-less single-VCO design with a bucket-load more patching options. (The MS-50 also purportedly ‘sounded better’ than the MS-20. I couldn’t tell you one way or the other as MS-50s are now rarer than the proverbial rocking-horse doo-doo. Expect to pay three to four grand if you do find one for sale.)
But I’m getting off track here. The MS-20 Mini (and the MS-20) is quite a synthesis workhorse. It’s the type of instrument you can continually turn to, churn up a sound quickly, sample it and get back to composing. This is how many would use the original unit, otherwise you’d need a MIDI-to-control voltage converter to get the unit triggering from your DAW. Fortunately the new MS-20 Mini features a MIDI input and a USB port. The vanilla five-pin MIDI input will allow triggering notes from the MS-20 Mini, and hooking the unit directly to your DAW machine via USB will enable bidirectional MIDI control. In other words you can use the keyboard of the MS-20 Mini to play notes into your DAW/sequencer.

Exactly why Korg decided to re-release the MS-20 at 86% of its original size is a bit of history in itself. In 2007, Korg released a software suite of instrument plug-ins — the Korg Legacy Collection. These plug-ins replicated classic Korg synths such as the MS-2000, Poly Six, M1, Wavestation, and of course, the MS-20. For a limited time you could buy the package with an MS-20 style controller — the MS-20ic. The controller was an 86% size replica of the MS-20 with mini-sized keys and 1/8-inch patchbay jacks (rather than the original MS-20’s 1/4-inch patchbay jacks). In order to function as a plug-in controller, the MS-20ic sent MIDI information from every knob on its front panel to the Korg Legacy MS-20 plug-in — even to the point whereby plugging physical patch leads into the controller’s patchbay replicated on-screen patch cables in the plug-in’s GUI. It’s quite a clever little unit, and also controls Korg’s iMS-20 application for iPad, which, I might add, includes a virtual SQ-10 sequencer.
As it transpires, the MS-20 Mini is similar to the controller — similar reduction in size, same 1/8-inch patchbay jacks — but with real analogue guts. Some might complain about the mini-sized keyboard, but I’m personally a fan of mini-size keys — it takes me back to the days of belting out bass-lines on a Yamaha DX100. The only other, very slight niggle, is the signal out jack is a small 1/8-inch jack. But this is so you can easily route the output through the unit’s ‘external signal processor’ using the supplied 1/8-inch patch cables if needs dictate. The MS-20 Mini comes with 10 of these patch cables, and they’re yellow — just like the virtual patch cables in Korg’s software variations of the MS-20.

The unit also comes with a reprint of the original MS-20 manual which is kinda cute — this is, after all, an MS-20. The manual includes a few ‘patch sheets’ to get you started with ‘classic’ synthesiser sounds such as ‘Steam Locomotive’ and ‘UFO’ (‘Funny Cat’ didn’t make the cut). One of the interesting patches laid out in the manual makes use of patching a guitar into the unit. With four patch cables you can delve into the 1978 version of guitar synthesis. Prepare to alter your playing style somewhat as the results can be incredibly random, almost unusably random, just like the original, but it can be a lot of fun and a great source of sound bites and inspiration. Of course you aren’t restricted to inputting guitars through this patch — stick anything you like through it — bass, vocals, didgeridoo, wailing cats, it doesn’t matter. This is all voltage controlled stuff so anything you can get into a microphone or an amplifier (and out into the MS-20 Mini) will provide a suitable source. In fact, while scouring the interwebs for MS-20 information I came across an addendum to the MS-20 manual which explains some patch setups for external sources — we’ll upload this to the AT site for those interested.
Another awesome patching trick is the ability to send sounds straight into the MS-20 Mini’s filter section. Here you can use both high and low-pass filters — each with resonance — or ‘Peak’ as it’s labelled on the front panel. You could even use an expression pedal to alter the filters for ‘wah’-style effects. What you’ve got to remember here is the MS-20’s filter is renowned for its creamy sound, plus the fact that when the Peak (resonance) controls are right up the filter will oscillate wildly. You can achieve an incredible amount of variation from this filter set — and it’s all completely analogue. Hoorah!
When it comes to more traditional synthesis manoeuvres, the MS-20 Mini shines like the classic synth it is. Guttural bass sounds, screaming leads, and every quirk and warble in-between is possible with dual oscillators, dual filtering, and enough modulation options to keep you fumbling about with patch-leads for years to come. It’s a ‘go-to’ synth. There are, however, a few slight differences under the hood to the original MS-20. For starters there’s a newly designed VCA offering a better signal-to-noise ratio than the 1978 model, and the power supply is now an external adaptor. There’s also an auto power-off function which can be defeated by holding down some keys on the keyboard when powering up. Re-enabling auto power-off is a reversal of the same procedure. Other than that the design is apparently a ‘faithful reproduction’ of the MS-20 with MIDI I/O.

I’m in a bit of a quandary as to whether the MS-20 Mini is something I need to own. The price is phenomenal (an original will set you back $1500 plus) and yes, it’s a real MS-20 with real analogue circuitry. It sounds absolutely awesome as real analogue synths do. Putting the MS-20 Mini up alongside my Korg Legacy Collection MS-20 plug-in cast a lot of light upon my decision-making process as the sound from each is strikingly similar. I’ll admit the MS-20 Mini does have the edge but is it that much of an edge to warrant the expense? Do I want a real analogue MS-20 that is basically an old synth with MIDI under its belt, or do I stick with the plug-in with the option to save patches and record?
My humble question is, if Korg could make the MS-20ic controller and the MS-20 Mini, could it be possible to combine the two so the MS-20 Mini could send controller information from its knobs? Imagine the possibilities if the unit sent controller information. You could save patches to your sequencer, recall patches for each composition, and you could record some excellent realtime tweaking. If possible, it would make a killer resurrection even better than the original and still be far more affordable. The grapevine tells me Korg has further analogue surprises up its sleeve. I sincerely hope a hybrid MS-20 Mini, one offering both the analogue engine of this synth with the controllability of the MS-20ic is in the works.
There are undoubtedly many who’ll be all over the MS-20 Mini simply because it’s the real deal — a ridgy-didge, stand-alone analogue synth. I wouldn’t blame them at all, and the lack of recall may be exactly what they’re after. Korg has been whetting the next generation’s appetite for analogue synthesis, with keen debuts like the miniature Monotron, Monotribe, and now, the Volca series. The price-point of the MS-20 Mini makes for a logical next step. It’s a solid purchase. Go forth and squelch!