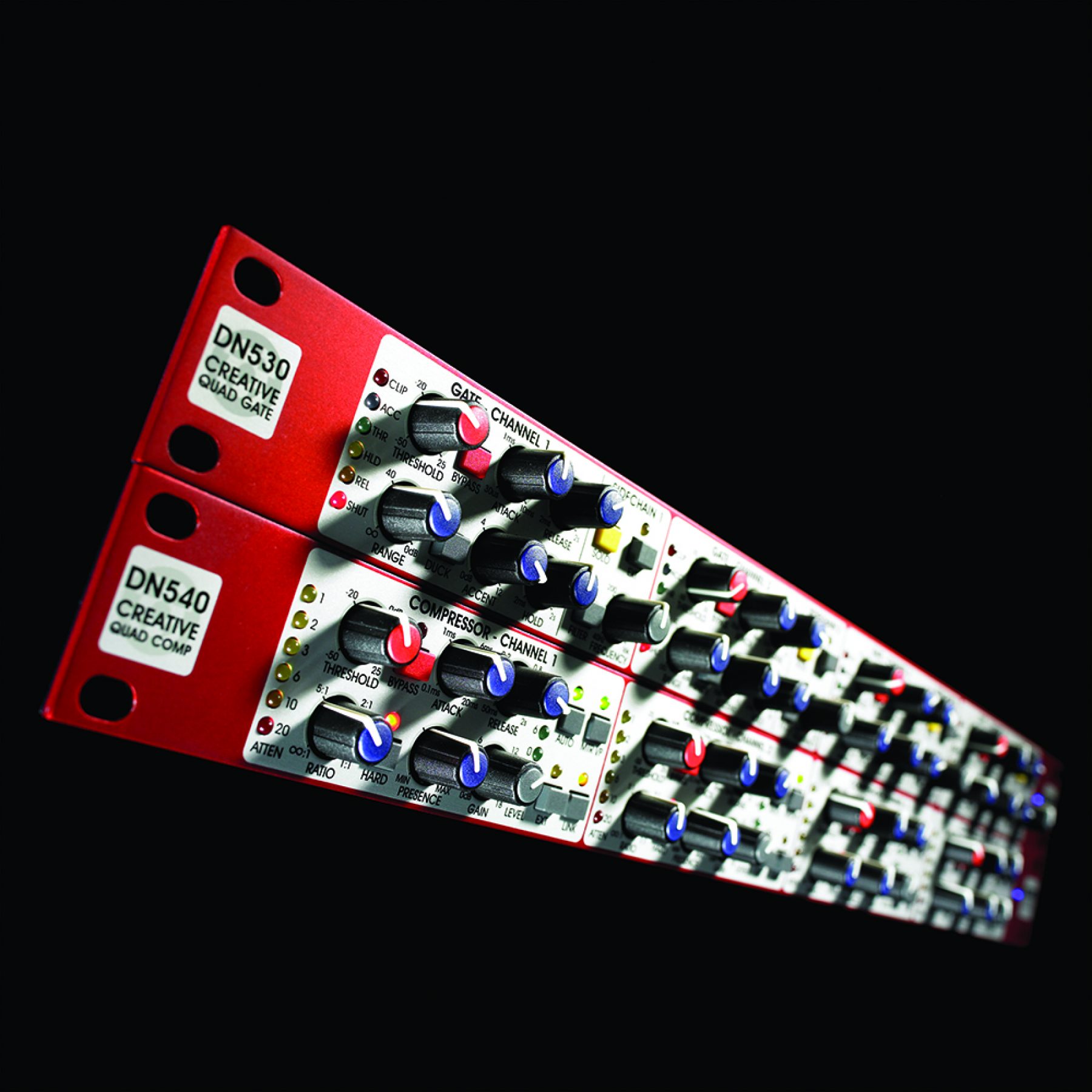 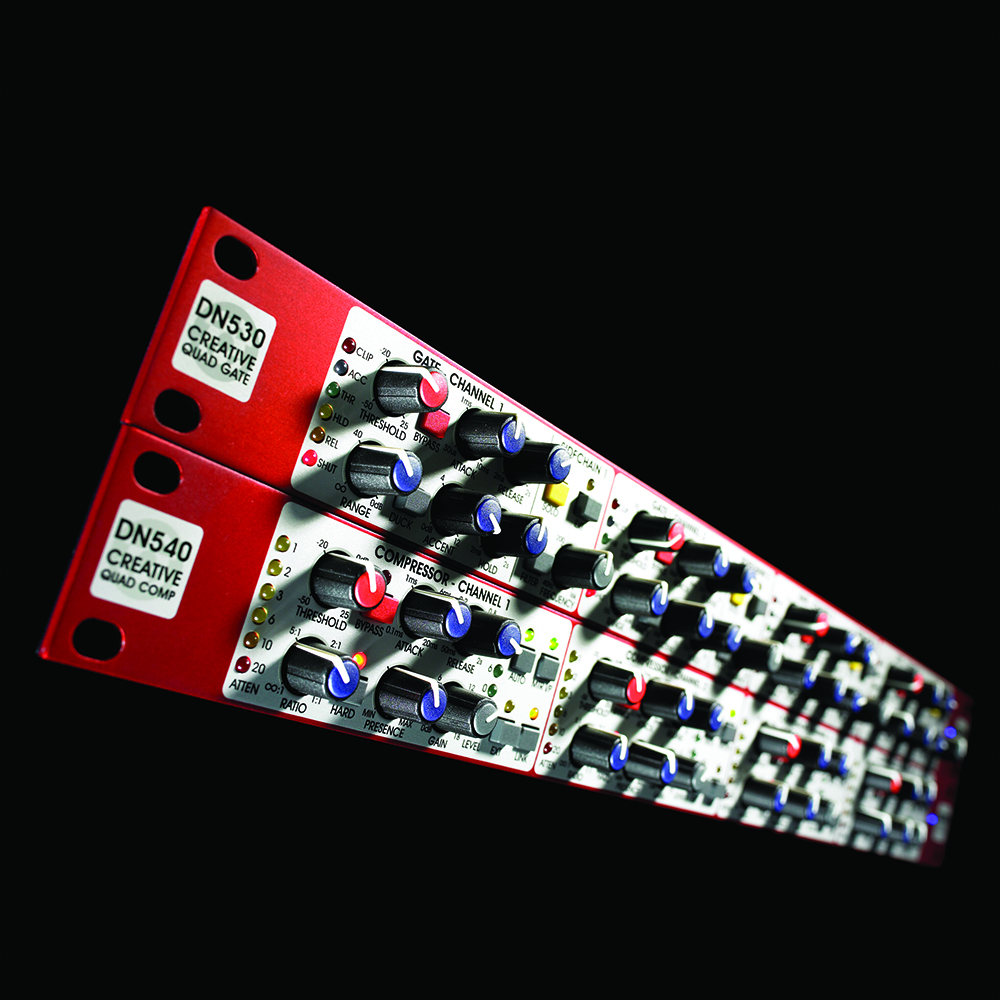 They’re analogue processors, they go in outboard racks and they’re new… what gives?

Good analogue outboard gear is a pleasure to use and Klark Teknik has been making some of the best examples of it for 30 years. As a result the brand has become one of the most trusted names in professional audio, and its once ubiquitous DN360 analogue graphic EQ is like an old friend in the front-of-house rack.
Even though heavy racks of outboard gear are largely being replaced by the almost unlimited processing power of digital mixing consoles, there are still plenty of situations where an external analogue compressor and/or gate will achieve a better result. In the case of the new analogue Klark Teknik DN530 Creative Quad Gate and the DN540 Creative Quad Comp,
they also provide audio enhancement not available in the
digital realm.
Both these new Klark Teknik models are single rack unit devices with distinctive looks about them – their four grey panels clearly defined against a red background. The knobs and buttons have a quality feel, the meters and indicator lights are bright and clear. The rear panels are the same on both units with balanced XLR ins and outs, and a ¼-inch TRS for inserting an external side chain. Unfortunately, ‘alternate’ ins and outs via ¼-inch sockets are not provided.

Looking at the DN540 Quad Comp first we find six knobs in each of the four compressor units; threshold has a red top for easy identification, the others blue/grey. The threshold, attack, release, gain and ‘presence’ knobs are all well placed and clearly labelled. The only exception is the ratio control, which is a bit counter-intuitive in my opinion, with the ratio increasing as the knob turns to the left. Klark Teknik has been doing this way for years… perhaps it’s just me. The six buttons on each of the compressors have colour-coded indicator lights. These control bypass, soft/hard knee selection, an auto attack and release setting, activation of the external sidechain, a ‘link’ to the next adjacent compressor and a choice between metering of the compressor’s input or output levels via the six-segment LED meters (which have indicator lights for 1, 2, 3, 6, 10 & 20dB
of gain reduction).
Using the DN540 is quickly rewarding. For live performance or recording it’s quiet as a mouse and when the threshold, ratio, attack and release knobs are all at 12 o’clock it can be thrown across anything as a general peak controller with good results. Fine-tuning allows for a wide range of compression styles from sensible to silly. It’s also one of those devices that just sounds good – whatever source you throw at it seems to come back not only dynamically changed but somehow more solid sounding. The metering is excellent and I especially appreciated the accurate calibration at low amounts of gain reduction – compression is generally best applied in small amounts and I got a strong sense of control by having the first 1, 2 and 3dB of gain reduction clearly displayed on the meters. The other pleasing function is the ‘Presence’ control, which is centred on 5kHz and progressively reduces the gain reduction in the hi-mids and high frequencies. It’s a useful tool that raises the loudness of a source by allowing higher levels of gain reduction without the sound becoming dull, and because it’s continuously variable the effect can be quickly tuned to taste. It’s most useful on loud sources and great for aggressive drums sounds where the attack and distinctive characteristics of the drum are maintained while the more powerful body of the sound gets reduced in level.
The DN540 could also easily earn its keep in any PA outboard rack as a general-purpose insert or as part of the system control. For live shows I routinely use a stereo compressor over the vocal sub-group to keep the peaks and choruses from becoming overpowering, and while this technique works reasonably well, the cost is often a loss of detail at higher gain reduction levels. The DN540, however, provides transparent and controllable compression with the Presence control allowing the operator to dial-in how much presence they want during the loud sections. This proved very effective over the vocal sub-group at one particular gig, with a noticeable improvement in clarity and diction when the music cranked up. Similarly, as an insert over drums the compressor’s fast response coupled with the presence control delivered a wide range of dynamic and tonal possibilities and for really tricked up, or super-aggressive live drum sounds, the DN540 can be chained together with the DN530 gate. Combining the two would be perfect for kick drums in metal bands where you really need to hear the attack of the drum while the rest remains as loud as possible. Luckily, I didn’t get to try this…

The DN530 is laid out in a similar manner to the DN540. Seven knobs and five buttons this time, but the threshold is still red. In the main section of each unit there’s the usual attack, release, range and hold knobs as well as buttons (with indicator lights) for bypass and duck mode. In the same way the DN540 has its unique ‘Presence’ feature the DN530 has an ‘Accent’ control that adds level to the signal transient. In the sidechain section of each unit there are buttons to solo the sidechain signal, activate an external device and a switchable internal sidechain filter with a knob to adjust its frequency response. The clever six-segment vertical level meter simultaneously displays (from the top): clip, accent, threshold, hold, release and shut.
The DN530 is fun to use. Analogue gates take me back to the ’80s and ’90s when I used them for big drum sounds at live shows and clean drum sounds in the studio – reverb tricks too. Most of the shows I do now are too subtle for gated drums, often too subtle for drums at all, but I got to try these with a couple of rock bands, and used as simple gates, they’re great. It’s easy to set them so they only open on the desired source, they don’t click, they close cleanly and you can hear the sidechain filter working. Like the DN540 the metering on the 530 is excellent. And then there’s the aforementioned Accent control. Klark Teknik calls it ‘Transient Accenting’ – adding up to 12dB of level to the signal immediately after the gate opens. The speed at which this extra level is added to the signal is determined by the unit’s Attack setting. The extra level only lasts 30ms but it’s very effective at adding snap to drums and other percussive instruments. It can get hard sounding, and too loud if you use a lot of it, but just a few dB adds a pleasing extra punch to gated skin drums and I quickly grew to miss it when it wasn’t there. Mixers of heavy rock bands will love both these units.
Overall these present as top-class analogue quad-compressor and quad-gate units equally at home in either live or studio applications. Both units offer features beyond their basic functionality; the DN540’s ‘Presence’ control and the DN530’s ‘Accent’ control are both simple but effective sound-shaping tools that set these Klark Teknik products apart from their competitors. There will always be uses for good analogue gear and both these units offer latency-free functionality beyond equivalent digital devices. Given the longevity of other Klark Teknik products the purchase of either of these units should be viewed as a long-term investment that you’ll enjoy using.