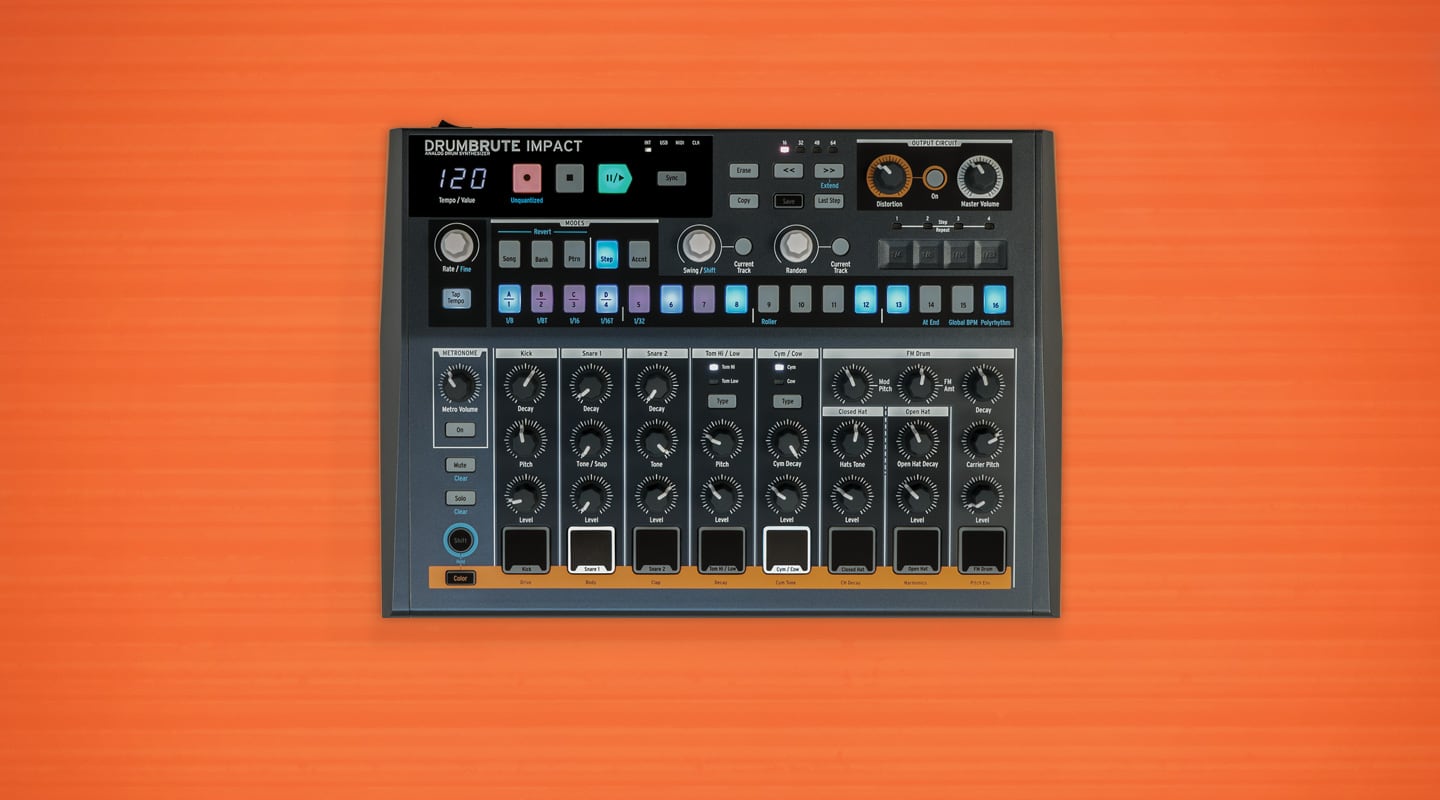 Arturia’s Drumbrute Impact may not have wooden end cheeks, but its distortion and ‘Color’ function make those look like elbow patches on a professor’s tweed jacket.

There was a time when Arturia was steadfastly a software manufacturer, producing some of the finest virtual reincarnations of history’s greatest analogue instruments. Arturia’s V-Collection kicked off with classic models like the Yamaha CS80, Roland Jupiter-8, and MiniMoog, growing it into the collection of 21 vintage synths and keyboards it is today. The V-Collection, for me and countless others, was the turning point for selling off various hardware units. Founded in 1999, it took around 10 years before the innovative French outfit moved into the world of hardware synthesis, touting its Origin hardware synthesiser as the mother of all synths — and rightly so, there wasn’t much you couldn’t pull off with the Origin.

Since 2009 the company has released a slew of keyboard and trigger-pad style controllers, all the while expanding its stable of software virtual instruments and effects. Come 2012, Arturia embarked upon the ‘Brute’ lineage of hardware synthesisers. The series has given rise to a number of synths, exclusively analogue, from the MicroBrute through to the MatrixBrute, and all adhering to Arturia’s fanaticism with analogue sound creation and tactile, hands-on control.

During 2016 Arturia added a drum machine to the Brute lineup. The DrumBrute offered 17 entirely analogue drum sounds consisting of two kicks, snare, clap, open and closed hi-hats, high and low toms and congas, maraca, rimshot, clave, a tambourine, ‘zap’, and cymbal (both forward and reverse). Like all the Brute range there were no menu driven parameters. Everything is accessible on the DrumBrute via dedicated pots, pads, and controllers, and with enough connectivity to keep any serial analogue synthesist gleeful — both in terms of individual analogue outputs and multiple sync options. Subsequently the DrumBrute has forged a sizeable following. In keeping with die-hard analogue aesthetics it even has timber end-cheeks!

Recently, Arturia announced another drum machine priced well below that of the original DrumBrute. DrumBrute Impact. While the Impact seems a lesser animal than DrumBrute with a mere 10 drum sounds, less individual outputs, and no timber end-cheeks, DrumBrute Impact is a weapon in its own right. DrumBrute users will no doubt wish to add an Impact alongside their DrumBrute, and those not wishing to stump-up for the more expensive version won’t feel the slightest remorse. But before I get to why, let’s look around at what the DrumBrute Impact has on offer.

Firstly the Impact is smaller. Covering about an A4 footprint you’ll find it easier to both lug to gigs and divvy out studio space for. There’s also only four individual outputs as opposed to 12 on the DrumBrute. These take care of the main instruments: kick, snares, hi-hats, and the wildcard FM Drum. More on that one shortly. For multi-tracking these are a must-have. It’s unfortunate, however, that the other instruments can’t be shunted to these outputs via software. MIDI I/O is the same as the DrumBrute, as is the clock I/O. Clock in and out can be set to cover multiple voltage systems, and the unit can sync as master or slave via USB and MIDI.

The sequencer is based entirely on the original DrumBrute, and is quite a revered system. Based on the tried-and-true 16-step model with the ability to hold 64 steps, it includes all the performance features found in the DrumBrute such as roll, randomness level, and the ever-joyous swing amount — accessed via a good old dedicated pot, of course. You can also bump the unit into record and input live drum-hits via the eight pads. The sequencing system is for all intents identical to the DrumBrute apart from one additional feature. All the sounds can be augmented with a ‘Color’ layer. This aspect will alter the sound of an instrument and ‘Color’ events can be added into the sequenced pattern — similar to when adding ‘Accent’ to an instrument and event on a TR-909 or 808. Each instrument has its own slight variation of Color — the kick gets a little distortion, the snares change in pitch, and the cymbals alter in pitch and are slightly excited, the hats have their decay altered, and so forth. With a unique alteration available for each instrument, the palette of sounds available increases exponentially.

KICK TO THE FM

Now to get to what’s really exciting and new about the DrumBrute Impact – the sounds themselves. The first snare is your typical 909 style, with a pot for decay and another for the balance between tone and snap. The second snare is a lighter snare with adjustment of the overall tone and a pot for decay. The high and low toms share a single pad with a button to switch between the two, along with a pot for overall pitch. Instigating ‘Color’ on the toms will lengthen the decay. The hats are very 909-ish and are scrumptiously crisp. The closed can be adjusted for tone while the open offers a pot for decay.

To the far right of the eight pads is the FM Drum instrument. A brilliant little instrument with four dedicated pots affecting carrier pitch, modulation pitch, the FM amount, and overall decay. Instigating ‘Color’ on this drum aligns the pitch envelope with the decay. FM Drum is wildly versatile. You can get it to make the most ridiculous noises. From high pitched warbles, repetitive pseudo bass-lines, through to Giorgio Moroder toms (think I Feel Love by Donna Summer), all the way down to longwinded Roland TR-808 kick drums and hokey CR-78 bops and boops. The FM Drum is nuts, and stupidly fun to use. Easy to sample from for a quick bass sound if you’re so inclined. There’s also a cowbell sound you can call on if you must. Reminiscent of the TR-808 cowbell, there are literally no adjustments for this instrument. That’s it. Cowbell. Go for it.

Now there are two final features I’ll mention. First up is the to-die-for kick drum. Seriously, go and have a listen to this thing as soon as you get the chance. The decay on this runs out to around three seconds, and the pitch goes down to hertz my monitors weren’t capable of serving up. Simply glorious. Pitch and decay are the only parameters other than adding a little distortion when adding ‘Color’. Plenty of thwack on the attack, and a gorgeous decay. By itself you could pull any electro kick you could possibly require. In fact, you may decide the kick drum alone is worth the admission price. Now add the global distortion available on the DrumBrute Impact and you’ll add hundreds more variations to that kick. The combination of these two is simply gorgeous. Yeah – that distortion circuit I’ve not mentioned until just now really sets the Impact ablaze. The original DrumBrute offered a global high-pass filter with resonance, which is all well and good, but this is so much more!

NO NEED FOR EMULATION

Considering the street-price on the DrumBrute Impact, I’m certain the machine will be a runaway success, simply because of the kick and the distortion effect. Then the FM Drum adds a world of versatility to the device again. Go have a listen, absorb a slight incursion on the credit card and grab what will outrun the original DrumBrute as a true classic.

The FM Drum is nuts, and stupidly fun to use