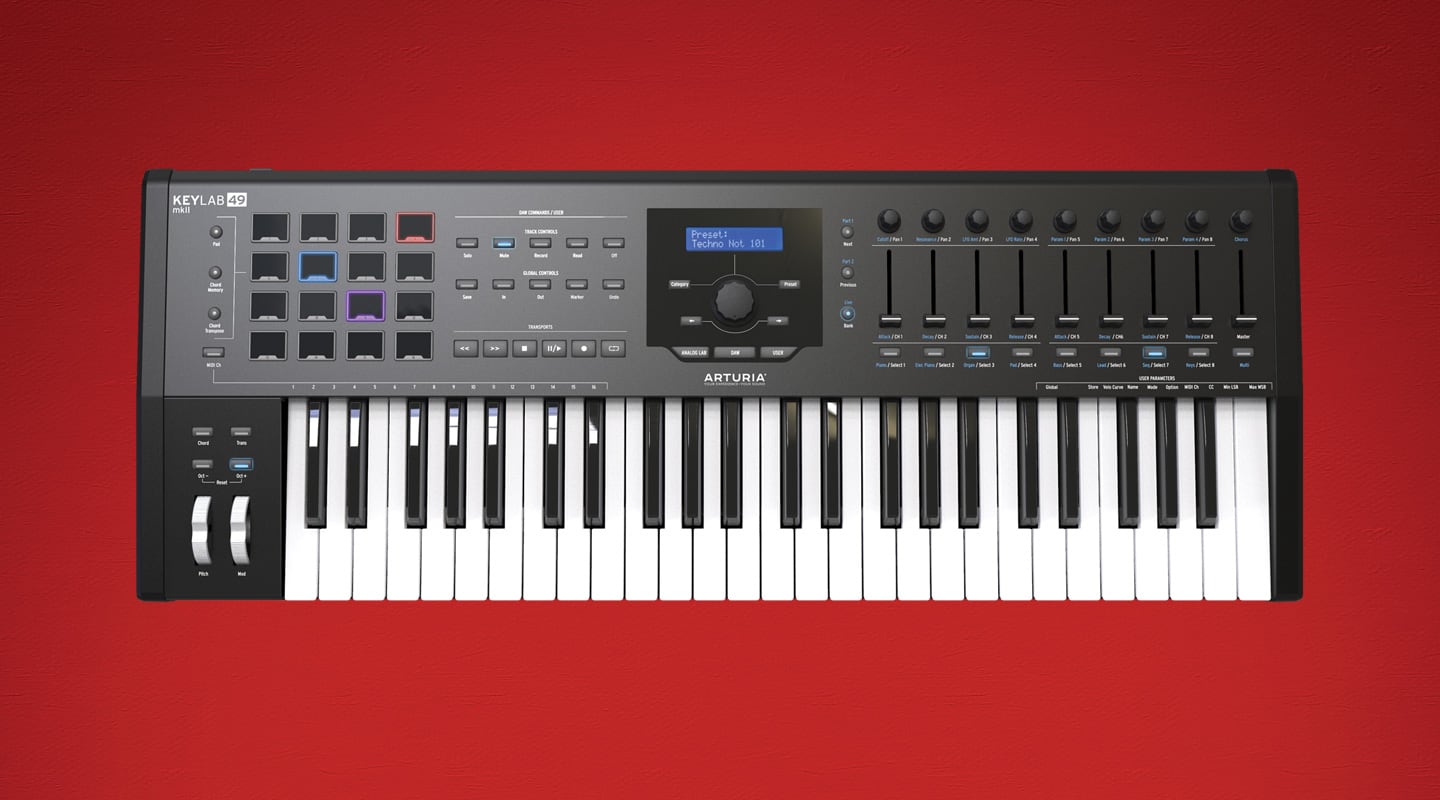 Arturia’s original KeyLab range featured some of the best and most comprehensive MIDI controllers for their price. Yet Arturia ups the ante with KeyLab Mk II. What’s new? In short, quality and control — there’s more of both.

Not only is KeyLab Mk II’s chassis made out of metal but so are the pitch and mod wheels. The keyboard looks especially sleek in the brushed black finish and I wouldn’t hesitate repping it on stage. The 16 multi-purpose RGB-backlit pads feel as good as Maschine’s. The keybed has a nice fast action. Plus you get a slather of DAW control with both Transport- and Track-specific buttons, and a helping of MIDI geekery like Chord mode and MIDI channel selection

Under the screen (which now sits in the centre) is a row of buttons which select the KeyLab’s mode  — Analog Lab, DAW and User. The latter lets you treat the board as a blank canvas of assignable control. Arturia MIDI Control Centre software makes it super easy to assign specific parameters to each hardware button, fader, pad or knob.

Of course, the perfect pairing for KeyLab Mk II is Arturia’s own Analog Lab virtual instrument. I was caught out when I fired up an outdated version of the software sending the KeyLab into a weird semi-control mode. A quick update saw the two come together like a dovetail joint.

You can scroll through Analog Lab’s sounds by either Category or Preset, with sufficient visual feedback on the screen to keep your head down. The row of nine faders with knobs atop link directly to the corresponding controls in Analog Lab. The cool part is you can have both Analog Lab and a DAW running simultaneously on your computer and easily switch control between the two using just the onboard buttons.

Ableton Live Lite is bundled with a KeyLab Mk II purchase, as is Analog Lab and Piano V from Arturia’s V Collection suite. For a first-time foray into the world of virtual instruments, KeyLab Mk II won’t disappoint. Neither will it let down a seasoned producer seeking a roadworthy and functional workhorse controller.