0 SHARE
Read Next: How to: Bang-on Retro Drums Part 3

The ’60s ushered in some pretty significant changes. Though Les Paul and others experimented with sound-on-sound recording in the early ’50s (essentially, playing one mono tape into a mixer, and recording another part at the same time to another mono machine), true overdubbing facilities only started to appear on three-track machines in the very late ’50s. The initial benefit was that orchestras could be overdubbed. Tracking sessions soon involved having the ensemble balanced onto one track while the singer, also performing live, was recorded to a second track. The orchestra would then be overdubbed onto the third track — a massive change at the time. As the first four-track machines started to hit in the early ’60s, this practice remained intact. Ensembles, including singers, still performed live in one space, and occasionally the additional tracks were used for ‘sweetening’ — adding horns, strings or backing vocals. The pre-’60s practice of self-balancing remained.

The first major change ushered in by the rock ’n’ roll era was that singers could monitor themselves through ‘monitor speakers’ to compete with the louder guitar amps that had also popped up. Drummers started to play harder and used more cymbals to mirror the live experience, prompting engineers to begin looking at new ways to convey this live experience to tape. Basically, everyone got louder.

This manifested in some small but important changes. Large diaphragm condenser mics were replaced as the main ‘drum kit’ mic with either a ribbon mic to tame the cymbals, or a dynamic mic to protect the more fragile/expensive mics from flailing drum sticks. A kick drum mic became compulsory too. Though in this early stage the front head was still on the drum, and engineers, concerned with the amount of air pumped out of this bigger drum, placed the mic no closer than a metre from the head.

In the control room, things changed as well. The valve consoles had to be upgraded to handle the four-track recorder functionality. In many situations, a compressor was placed between the bussed output of the console and the tape machine, to protect the tape from overloading. It meant the live tracks were submixed down to one channel, sent through a compressor and then to one track of the tape, embedding those sounds and balance into the mix forever. So a lot of time was taken to get the balances and interaction between the elements and the compressor right before they hit tape.

HOW TO GET THAT EARLY ’60s SOUND

Let the drums ring; take out or reduce the dampening in the kick drum, and use a full head on the front of the drum. Tune the drums up a bit higher than you’d expect, particularly the toms. Open up the hi-hats a bit more.

Use two dynamic mics for the kit — one out the front of the kick and one at cymbal height pointing towards the centre of the kit, so that the cymbals are pointing at the side of the mic. Move your cymbal setup around so you only have a crash and a ride.

With this setup, you are again listening for drum kit coverage. By this point, engineers were looking for a little more ‘focus’ out of the mics, hence the addition of a dedicated kick mic. With these two mics, you’re getting a better representation of the close quality of the drums.

Place another mic or two — condensers or ribbons — a few metres back from the kit, and point them in the opposite direction.

With these mics, you’re strictly imitating the sound of open vocal mics. Pointed away from the drum kit, they’ll pick up drum spill and ambience. By themselves they should sound unfocused and ambient. Mixed in with the above close mics, you get that authentic crunch.

Do the high/low-pass trick mentioned above. Submix all the channels into a single auxiliary through a compressor with a moderate attack, release and threshold so the kit glues together rather than pumps. Readjust the balance once you hear the effects of the compressor, as this process will (and should) change your balance. 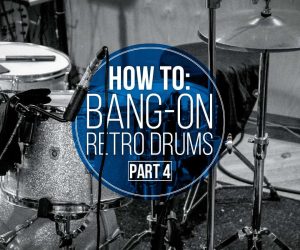 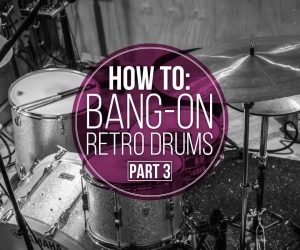 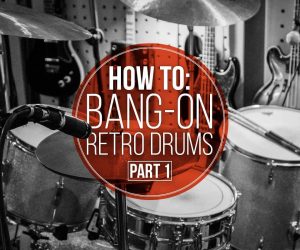 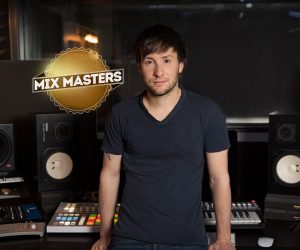 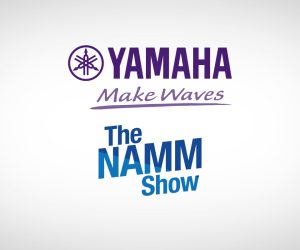