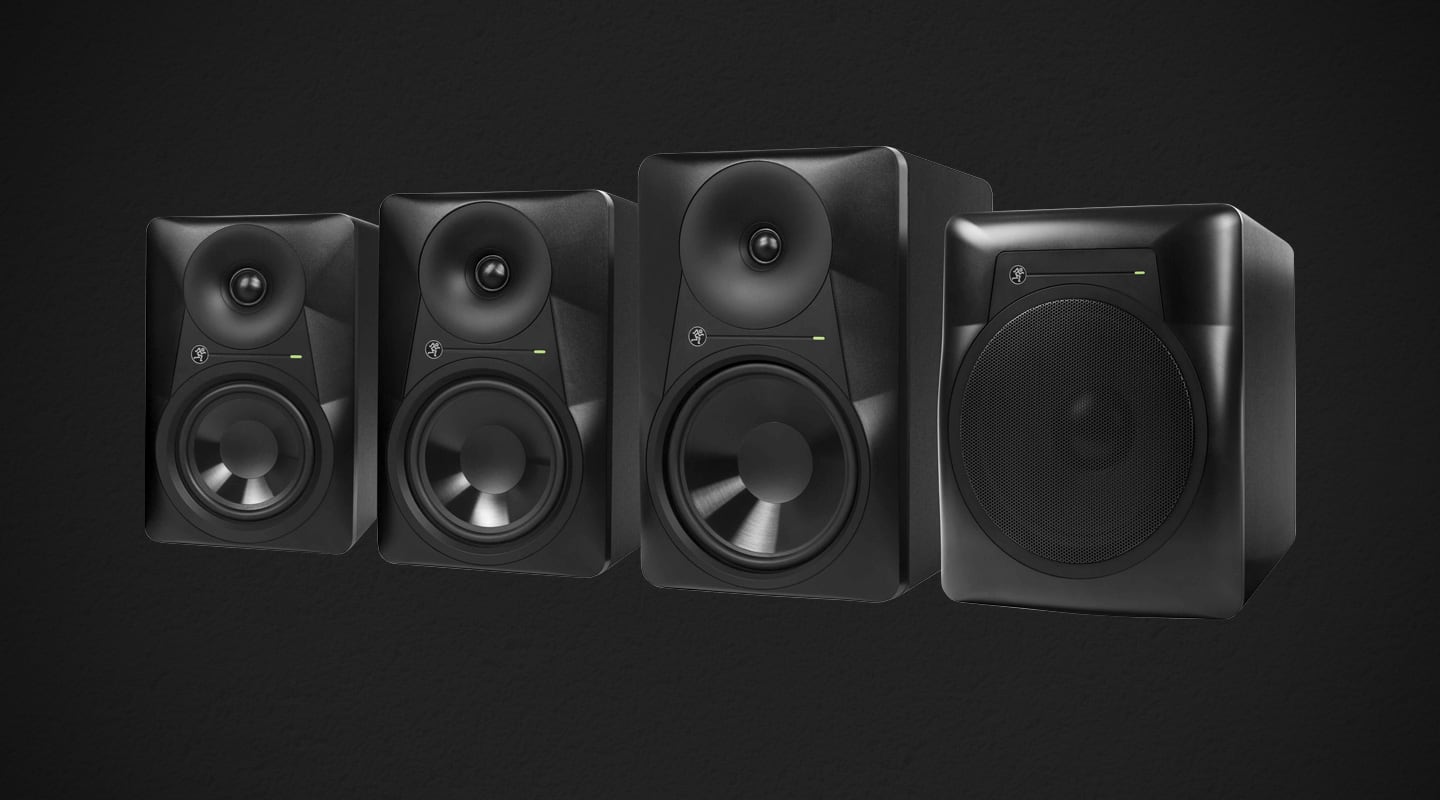 Mackie’s MR studio monitors have always been good, but with a completely rebuilt line, these budget monitors sound anything but cheap.

Mackie levels up its MRmk3 Series monitors with the OG-named MR Series. It signals a restart for what has been a successful line of monitors for Mackie. The range features the same sizes as the previous versions but they all look slicker with a renewed focus on performance.

You can get a pair of MR speakers in 5-, 6.5-, or 8-inch woofer sizes, with each accompanied by a one-inch silk dome tweeter. All MR monitors are self-powered by a class A/B amplifier, starting from 50W (5-inch) to 85W (8-inch). Mackie makes a big deal of its logarithmic waveguide design that’s supposed to widen the listening sweet-spot and give better stereo imaging. Aesthetically the all-wood cabinets lend the monitors a professional look and feel and the boxes have internal bracing for added stiffness and less structural resonances., studio

Inputs on the rear are balanced XLR and TRS, and unbalanced RCA. Controls include a HF filter with 0dB, +2dB, and -2B positions, three-way Acoustic Space switch for controlling the amount of bass emitted from the rear port, and a level pot. When connecting a pair of MR monitors to the MRS10 10-inch subwoofer, your source inputs plug directly into the sub’s internal crossover, which then feeds the monitors.

The MR624 6.5-inch version we received for review is a nice balance between size and sound. The extended low end missing with the smaller woofer size is more than compensated for by the MRS10 sub. Running the speakers for a few hours noticeably ‘opened up’ the sound, after which high frequency material was communicated very naturally.

I bought a pair of budget monitors — M-Audio BX5As — about 10 years ago for roughly the same price as a pair of new Mackie MRs. Putting the pair up together showed just how far budget studio monitor designs have come in the last decade. The MRs aren’t particularly ‘lively’ and the mid-range presence won’t flatter poorly-produced tunes like a scooped cheapie might. At the same time, complex mixes are broken apart far better — the kind of ‘magnifying glass’ effect you expect from a good monitor — and the sweet spot is also far wider than the M-Audios. With the sub switched off the 6.5-inch model felt a little timid in the lows compared to similar-sized models from other brands.

I found the distance between the two monitors plays a big part in getting a cohesive stereo image — if you’re too close it lacks distinction, or if you’re too far the centre image becomes weak and undefined. When setting them up, have someone move one of the monitors in and out until all material from left to right sounds firm and flat.

WHY DON’T YOU ASC

Acoustic Space Control counteracts bass reflex artefacts caused by near-wall placement by limiting the amount of bass ported through the rear of the monitor. You can easily feel the difference by holding your hand over the port while switching from A to B to C. Generally with small rooms, the less bass you pump into them, the better. Switching over to C instantly cleared up some muddiness.

The logarithmic waveguide surrounding the one-inch dome tweeters disperse high frequencies fairly evenly but don’t expect uniform sonics while wheeling about your studio. The same goes for vertical movement so it pays to mount the monitors at just the right height for a more accurate representation of what you’re hearing. Keeping the tweeters ear-level is a good rule of thumb.

The MRS10 single 10-inch subwoofer is properly gutsy and voiced quite accurately. The Quick Start Guide recommends powering it up with the level set at 12-o’clock to Unity. I turned it on closer to 7-o’clock and it was still too loud relative to the monitors which were set at 12-o’clock. For an ‘entry-level’ offering, it’s a fantastic sounding box that complements the MR monitors beautifully.

The continuously variable crossover is really handy. Take your time finding the sweet-spot for your room and resist the temptation to give the sub more work than it needs. Footswitch on/off control is invaluable when trying to judge an appropriate sub level without moving from your mix position. A sustain pedal-like footswitch comes included. Bear in mind that placing the sub in untreated home studios will result in peaks and nulls all over the place, and the spot for ideal bass monitoring probably won’t be at your mix position. In my room, the lows really blossomed when I pushed my chair about 1.5m back.

The more I listened to the Mackie MRs the more I liked them. Long listening periods didn’t cause ear fatigue even at reasonably high levels. Reference mixes I know like the back of my hand were presented with surprising detail.

The budget studio monitor market is a competitive one but Mackie’s long-held footing is only strengthened with the MR series. It offers honest, true sound with the useful Acoustic Space Control thrown in for good measure.