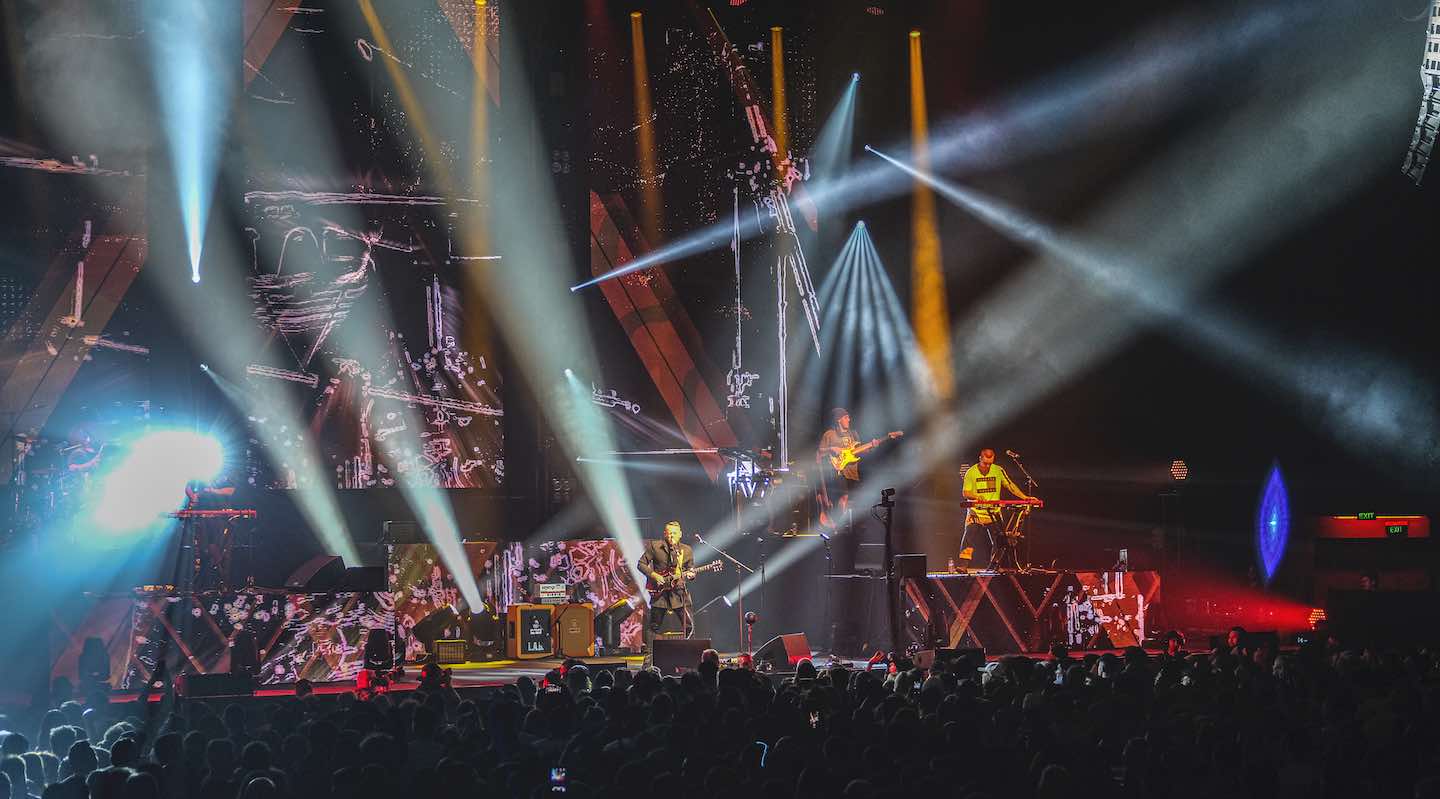 Marking the country’s much anticipated return to live music events, chart-topping band L.A.B. played a sold-out show for 6,000 fans at Spark Arena in Auckland. Moved from its originally scheduled theatre venue, such was demand, this was the first major concert since lockdown. College Hill Productions supplied an L-Acoustics K1 system, bringing an energy to the group’s audio that offered the enthusiastic crowd a celebratory performance.

L.A.B.’s label and management, Loop Media, is a long-time client of College Hill Productions, its preferred supplier for all things audio. Loop is headed by Michael (Mikee) Tucker, with Dan Clist and Scott Tindale assisting him. When the call came to supply an sound system for the world’s first arena concert after the COVID-19 lockdown, the team at College Hill was thrilled to be involved.

“The show was originally scheduled as a smaller club-style show to happen later in the year. Once COVID-19 hit New Zealand, we weren’t sure when the industry was going to pick up again,” says College Hill’s Audio Production Manager, James Thompson. “When Mikee contacted us to say he was planning on shifting the concert to Spark Arena, and making it the first arena concert back, we got our planning books out and waited until the all clear was given to host mass gatherings.”

In the background, quotes, plans, and logistics were being formulated by Thompson, alongside the College Hill team which consisted of Front of House System Design and System Engineer Johnny Keirle, Senior Systems Engineer/Audio Crew Chief Kevin Bennett, Monitor System Engineer David O’Brien, PA Rigger and Patch Tech Tracey Dorn, and PA Rigger and Patch Tech Brooke Paterson from their home offices. Once restrictions were lifted, they had approximately a month to pull everything together, working closely with the band to select the right equipment to cater for their needs.

College Hill’s inventory has a full complement of products, from the flagship K Series systems, through to smaller coaxial enclosures and, as far as Thompson is concerned, it was a no-brainer to use L-Acoustics for the concert.

“We chose L-Acoustics because the products across the range offer superior coverage at greater distances, as well as having great vertical and horizontal pattern control,” he explains. “The K Series products are an extremely well-designed set of tools that allow us to fill large spaces with uniform coverage, whilst focusing that coverage at the audience and away from surfaces with low absorption coefficients.”

Using L-Acoustics Soundvision 3D modelling software, a preliminary design was made to evaluate cabinet counts and configuration options, then refined on-site to a more detailed prediction for inter-box angles, as well as FIR filter and Air Compensation starting points. Using SPL mapping and probes, Keirle was able to predict in advance how the PA would respond in an empty, dry room, as well as where he foresaw any problematic areas caused by different atmospheric conditions during the show. Soundvision allowed him to verify his sub array design visually, again allowing him to see in advance any areas he might want to focus on when approaching alignment and optimisation of the system.

“The flown system was configured with a K1-SB extension to increase throw and directivity of low frequency energy in the array,” says Keirle. “The speaker configurations were designed to maximise coverage uniformity both in terms of SPL and tonal balance, as well as frequency distribution and response. The side hangs of eight K2 at 90º (asymmetric) were required to fill just a small section of seating outside the coverage of the main hang.”

L.A.B. front of house engineer, Ritchie Allen, and monitor engineer, Charlie Bronson, were relieved to hear that College Hill Productions was looking after them for their shows. “They complimented the quality of PA setup and told us it definitely lived up to the L-Acoustics reputation,” said Thompson.

Feedback from the audience was equally enthusiastic. “The crowd could really feel the energy of the band through the PA, which was a fantastic result. We were told by several attendees that it was good to be back at a concert with great sound,” Thompson continues. “The buzz is real!” adds Tucker. “The sound was the best we have heard in Spark Arena, clear, crisp and controlled.”

The College Hill team followed up their support of L.A.B.’s Auckland show with another sold-out performance in Hamilton, New Zealand a few days later.

“It was a great feeling for us all to be back in the workforce,” concludes Thompson. “Whilst we adjust back to this ‘new-normal’, we do feel for our friends and family all over the world who are still coming to grips with the uncertainty of our industry. Stay strong, be kind and we can get through this together!”