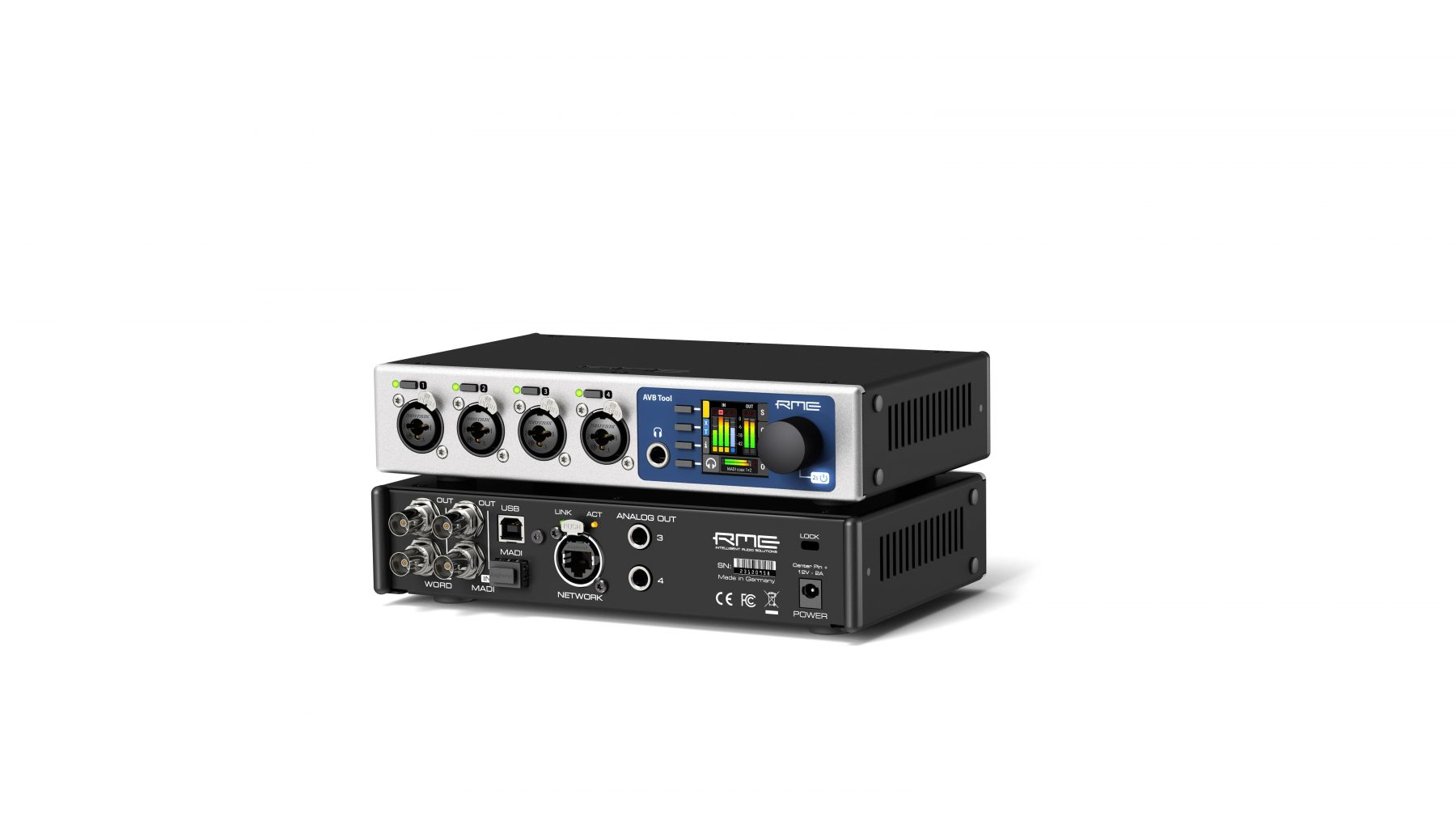 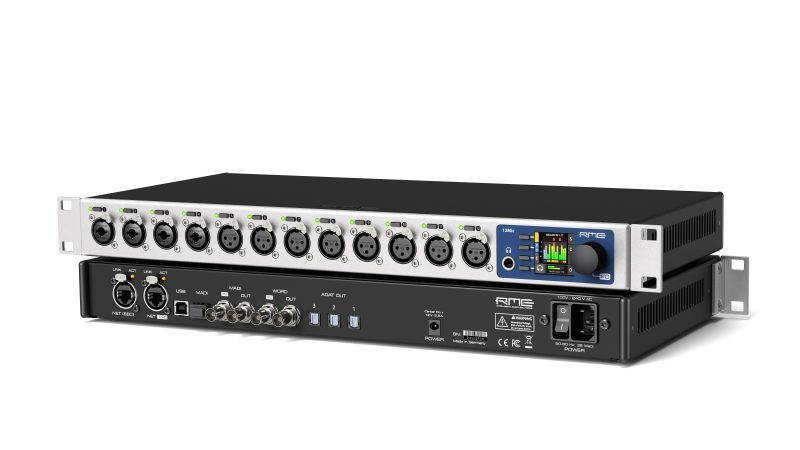 The PAD-free microphone input stages have a 75 dB gain range and accept signals of up to +18 dBu. Integrating new AKM converters, the extraordinary SNR values of the UFX+ have been improved by 3 dB to an astonishing 121.2 dB(A) on all channels. All device states and controls can be operated directly on the front panel with an encoder and four buttons that change their function depending on selected feature, letting the user rapidly create gain groups, switch phantom power and route signals to the headphone.

On the digital side, the 12Mic extends RME’s lineup of AVB devices, all of which meticulously implement the IEEE standards for audio streaming, discovery and control, allowing the devices to be discovered and fully controlled by any AVB controller, making vendor-specific control protocols obsolete. Any signal reaching the 12Mic can be routed and streamed over deterministic networks with fixed latency and guaranteed bandwidth, with no switch configuration required. The 12Mic also boasts two fully redundant network ports based on the recommendations of MILAN, featuring MADI ports that support RME’s MADI redundancy implementation, giving the 12Mic multiple layers of redundancy suitable for live sound applications.

A web frontend offers convenient access to the device controls and its integrated 268×282 channel routing matrix. The matrix allows free routing between analogue inputs and headphone outputs, as well as all channels of both MADI ports, the AVB streams, and three ADAT outputs. The device has no fan and therefore remains silent in all situations.

The AVB Tool combines four microphone, instrument and line level inputs, headphone and separate line level outputs, 128 channel AVB deterministic network audio and up to 128 channels of MADI I/O, side by side in a half rack 19-inch device. An internal 260×260 channel router can connect individual analogue, MADI and AVB channels, providing an easy integration of both MADI and AVB devices. At the same time, its pristine analogue converters interface with the most common analogue signals in a control room, a studio or on stage: four XLR-TRS combo inputs with remote controllable 75dB gain in 1dB steps, an input line level sensitivity of +18dBu and switchable high impedance on each channel; a stereo headphone output, and two analogue line level outputs with switchable +4/+19 dBu reference level. The AVB Tool features a TFT display with an encoder and four buttons for convenient direct access to all features. It can also be fully remote controlled with a web-interface on any network link (also via Wi-Fi). The device is powered with an external power supply. Seamless redundancy is available for MADI signals when the secondary MADI port receives the same signal as the coaxial MADI input. If redundancy is not required, the optional optical single- or multimode MADI module is treated as an individual MADI I/O with full bandwidth. 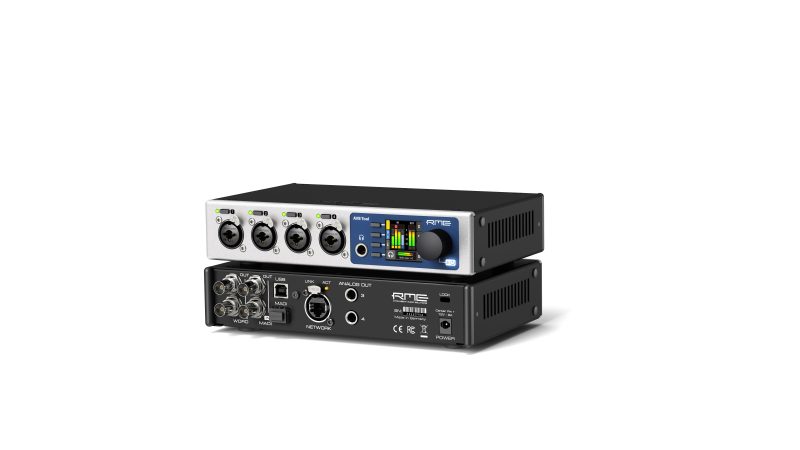 Boasting eight AVB streams in AM824 (legacy AVB) or high-performance AAF (MILAN compatible) format, the AVB Tool features double the number of typical streams available in RME AVB core, with configurable size and format per stream. Up to 128 audio channels can be sent and received over AVB in total across all streams. In comparison to the 12Mic, the AVB Tool has the same input stages as the first four channels of the 12Mic — the successful combination of components found in the UFX 2 and UFX+ with a new AD converter, extended with switchable High Impedance and balanced line level on the TRS. Instead of ADAT output, it provides two balanced line level outputs at the rear, for monitoring. 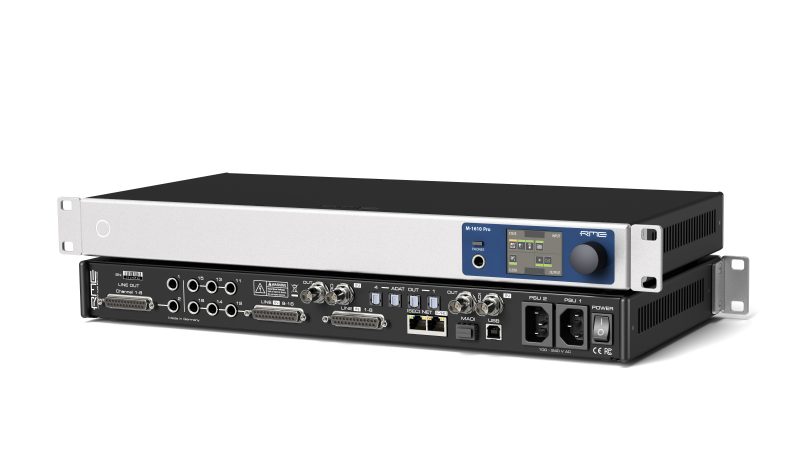 Integrating 16 analogue inputs with switchable sensitivity per channel of up to +24 dBu, eight corresponding analogue outputs, and an additional headphone output, the brand new M-1610 Pro brings plenty of analogue I/O to any studio setup. With its coaxial and (optional) optical MADI, redundant AVB, and four ADAT optical outputs, the device represents one of the most versatile and best performing converters on the market. Recording engineers using various analogue effects and instruments in their sessions have requested a single device that combines a selection of the outstanding M-32 Pro analogue inputs and outputs. The M-1610 Pro delivers even more than that at an unbeatable price point.

Compared to the M-32 Pro series, which were designed primarily for fixed installations, the M-1610 Pro adds TRS jacks that can be used instead of the D-Sub connectors on input 11-16, and TRS jacks that can be used in parallel to D-Sub output 1-2, as well as redundant network ports and a headphone output with quick access button for source selection and volume. All device features are configurable on the large TFT display with encoder, via network using a browser-based web interface, and also via AVDECC — allowing other AVB devices to control the M-1610 Pro without using anything but the AVB standard itself.

The internal routing matrix brings up to eight AVB streams with a total of 64 channels, the coaxial and optional SFP optical MADI port with each up to 64 channels, all analogue I/O and the ADAT outputs side by side for flexible routing between the 208 inputs and 234 outputs. Lowest converter latencies and deterministic AVB networking with configurable network delay down to 0.3 ms allow the M-1610 Pro to deliver samples, even from multiple devices, at incredible speeds — time-aligned with nanosecond accuracy across an entire network. The AD and DA filters have been carefully optimised for different sampling rates, with a focus on accuracy and RME’s signature ‘transparency’ (nothing added, nothing taken). Together with SteadyClock FS — the current revision of RME’s ultra-low jitter digital clock technology — the conversion to and from analogue is state of the art, at any level and digital format. As a notable difference to similar devices, the three analogue line levels per channel each offer the full dynamic range of the converters. The outputs are DC coupled.