Working on the Weeknd

All-round producer and MIDI guitar programmer, Doc McKinney, explains how he and The Weeknd pulled together 18 songs from 40 collaborators and fashioned Starboy.

Not one song on The Weeknd’s [aka Abel Tesfaye] 18-song third album, Starboy, is credited to less than five writers. There were 40 credited on the album in total including Daft Punk, Diplo, Max Martin, and Benny Blanco. To help hold it all together, the 45-year old Martin ‘Doc’ McKinney worked alongside Abel as co-executive producer.

McKinney wasn’t involved at the very early stages of Starboy either, but soon got his teeth stuck back in. Besides executive producing, Doc was involved in songwriting, engineering, playing, programming and producing. Some of the songwriting took place at McKinney’s own studio in Toronto, but for seven months they were holed up in Conway Studios in Los Angeles, where they had a lockout of the entire studio and beatmakers and musicians were coming in and out, working in all rooms.

AT talked to McKinney in Los Angeles about Starboy, and he was at pains to credit the contribution of the collective and Abel’s central role. McKinney: “Abel is really hands-on and super-creative, and always working. When I came into this record, there already were quite a few song ideas. Abel is a close collaborator with Max [Martin], and they had already recorded most of the two songs that were to appear on the album [Love To Lay and A Lonely Night]. Abel had also worked on the basics of the song he’d written with Benny [Blanco, Attention]. Plus he’d been in Paris working with Daft Punk. The making of this record was very different to the other records I’ve worked on with Abel.”

Martin ‘Doc’ McKinney was born in Canada, but grew up in Minneapolis, where he started his music career playing guitar in punk-rock bands. It was during his first tour at age “13, 14” that he squatted in Manhattan. Growing up as a black kid playing guitar elicited sneering responses, but “what people don’t understand about me is that I don’t give a f**k,” said McKinney. “I grew up punk rock as hell.”

In 1994, in his early twenties, McKinney decided that there wasn’t much space for him to grow as a musician in Minneapolis, so he moved to Toronto. It was here that he began the duo Esthero, with singer Jenny-Bea Englishman — their debut album Breath from Another (1998) became a trip-hop classic.

McKinney went on to work as a co-writer and producer with artists like Kelis, Raphael Saadiq, Stiffed, and Santigold. Because of his background as a musician and a guitar player he says, “there’s a lot of room for me to be creative when I’m working with new artists. My main thing is developing artists. I’m not motivated by money, so the music means everything to me. I definitely have a lot of ideas and like to be involved in and collaborate on every aspect, at least in the beginning stages.”

AudioTechnology: How did you get involved with The Weeknd?
Martin ‘Doc’ McKinney: “When I first met Abel, he’d already been writing and recording with various people and had put four songs on the Internet a few months earlier. Henry ‘Cirkut’ Walter and Adrien ‘AG’ Gough had been working on one of these tracks as part of a production team I was mentoring called The Dream Machine. They told me to check Abel out, so I invited him into my studio on the first of January, and quickly established that natural connection which happens occasionally in music between an artist and a producer or writer. I’m quite a bit older than him, I have two kids and a family, and his third mix tape had more sexual content. We didn’t seem to be able to get that right, so I dropped out of making it. We also didn’t manage to connect for his first two albums, but then he asked me to come on board and produce the new record.”

MDM: “Abel is very private. In the beginning, it was just Abel and myself working at my studio. He’s a very strong songwriter but likes to collaborate with many different people. At Conway Studios we had a core team of Abel, Ben [Billions, aka Benjamin Diehl], Cashmere, Cirkut writing and producing in different rooms, with others dropping by. Sometimes all three rooms would be filled, but it was empty a lot of the time. Most of the production took place at Conway, then Daft Punk did their thing in Paris, Max Martin at his compound, and Benny in New York.

“Writing pop music is very different to traditional song writing now. It’s not like country music, where one person comes up with the lyric and melody and chords and is the sole writer of each song. In contemporary pop, producers and beatmakers have turned into writers. Anyone who contributes an idea, even just two words, gets a credit. That’s why you see many writers per song — Starboy is typical of that.”

AT: How do you start the songwriting process?

MDM: “False Alarm was one of the first ideas Abel and I developed. It started out as a punk jam session, with me on guitar. Many songs resulted from actually playing, rather than programming. We’d talk and listen to music then start wailing away on guitars, keyboards or drums, and musician friends of ours would drop by and play along with us. We weren’t serious about trying to create a pop or punk song. We weren’t trying to fit things into genres, we just tried to make great music and create something that made us feel something.

“I played some of the guitars in False Alarm and that’s me playing the lead guitar on Sidewalks! I rarely credit myself for instruments on records. I don’t like these credits that go, ‘hi-hats programmed by X, bass in the bridge by Y.’ It’s too much. Sidewalks started with an idea I laid down maybe a year earlier with a producer called Bobby Raps. I did the drums and guitar and Bobby killed the bass line. Abel liked it, so we worked on getting it to the next level. We got Ali Shaheed Jones-Muhummad from A Tribe Called Quest in who did some cool orchestral stuff on it, and Kendrick [Lamar] did an amazing job. I was stressed out, because he wanted to start tracking so fast and I was still in Ableton, so I had to cut his vocals in that. Ableton is not an ideal DAW for cutting vocals on, but it came out amazing.”

AT: Are you primarily an Ableton user?

MDM: “I’ve been working in Ableton for the last 10 years, though I also use Logic and Pro Tools. Ableton is very transparent for writing and production. It’s very flexible when you’re changing things like pitch and tempo. However, if I was scoring a movie, I’d use Logic, which is great for MIDI and composing. Pro Tools is the best for cutting live instrumentation and vocals.

“I actually use a MIDI guitar to do all the keyboards and even the drums. I also have real drums, bass, and keyboards in my studio, but whether I use them depends on what the project needs. My MIDI trigger is the Fishman Triple Play, which has the fastest latency of any MIDI guitar, short of the ones that work with buttons. I’ve been working with MIDI guitar for so long that I’m used to latency, but the Fishman is totally workable. I used it a lot on this album, as well as playing regular guitars. I’m lucky that Abel is a big fan of guitars, so many of the ideas we came up with started on guitar.”

I actually use a MIDI guitar to do all the keyboards and even the drums. I’m lucky that Abel is a big fan of guitars, so many of the ideas we came up with started on guitar

AT: There’s a fair amount of Auto-Tune over Abel’s vocals, was that always part of the plan?

MDM:“We had lots of conversations about it. Abel’s voice is beautiful and he doesn’t normally need Auto-Tune. Instead we used it to create a certain vibe. It was not about trying to sound cool. You can be a great guitar player on the acoustic guitar, or you can be a great electric guitar player. They are two different things. It’s the same with singing with or without Auto-Tune. For example, Sidewalk has a classic soul sound and would have sounded derivative if Abel had sung that without AutoTune. It helped make the record sound more current.

“Many different people cut Abel’s vocals for this record, by the way. If the spirit catches him, every way works. If I recorded him, I used a vintage Neumann U67, which sounds amazing on him, and a UREI 1176 Blue compressor. Sometimes a Shure SM7 or SM57 also works great on Abel. Max Martin or Daft Punk might have used a different mic and recording chain.”

AT: Was there a lot of back and forth between the 40 collaborators over the seven months?

MDM: “Sometimes it takes five minutes to come up with a melody and a chorus, but then you can play around with it for a week, or a month, or longer. Sometimes we’re close to the end and the bridge still hasn’t been written, or it’s not quite right, then you have that moment of inspiration. We play with pitch, tempo, sometimes we try a melody or a song over a trap beat or a house beat; you’re constantly playing with it. The production may change, which may prompt a key change, which inspires another change, and so on.”

AT: The final track list is 18 songs. With so many collaborators, how did you get it all to gel?

MDM: “Drawing together all that material was difficult. We spent a lot of time on pre-mixes. Cirkut made rough mixes of each track in Cubase before transferring the sessions to Pro Tools and handing them over to Manny Marroquin and Serban Ghenea. There are few artists, perhaps only Prince and Michael Jackson, who can go from pop to rock to hip hop and be convincing. Fortunately Abel is comfortable in all those genres and has the ability to use different aspects of his voice and contrasting vocal sounds. Above all, he has the ability to remain excited about songs after working on them for five months. He really is a visionary.” 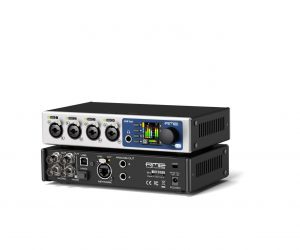 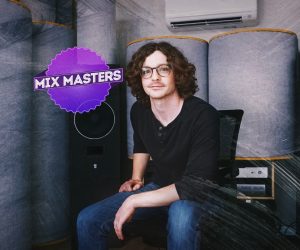 Serious Results For A Joker