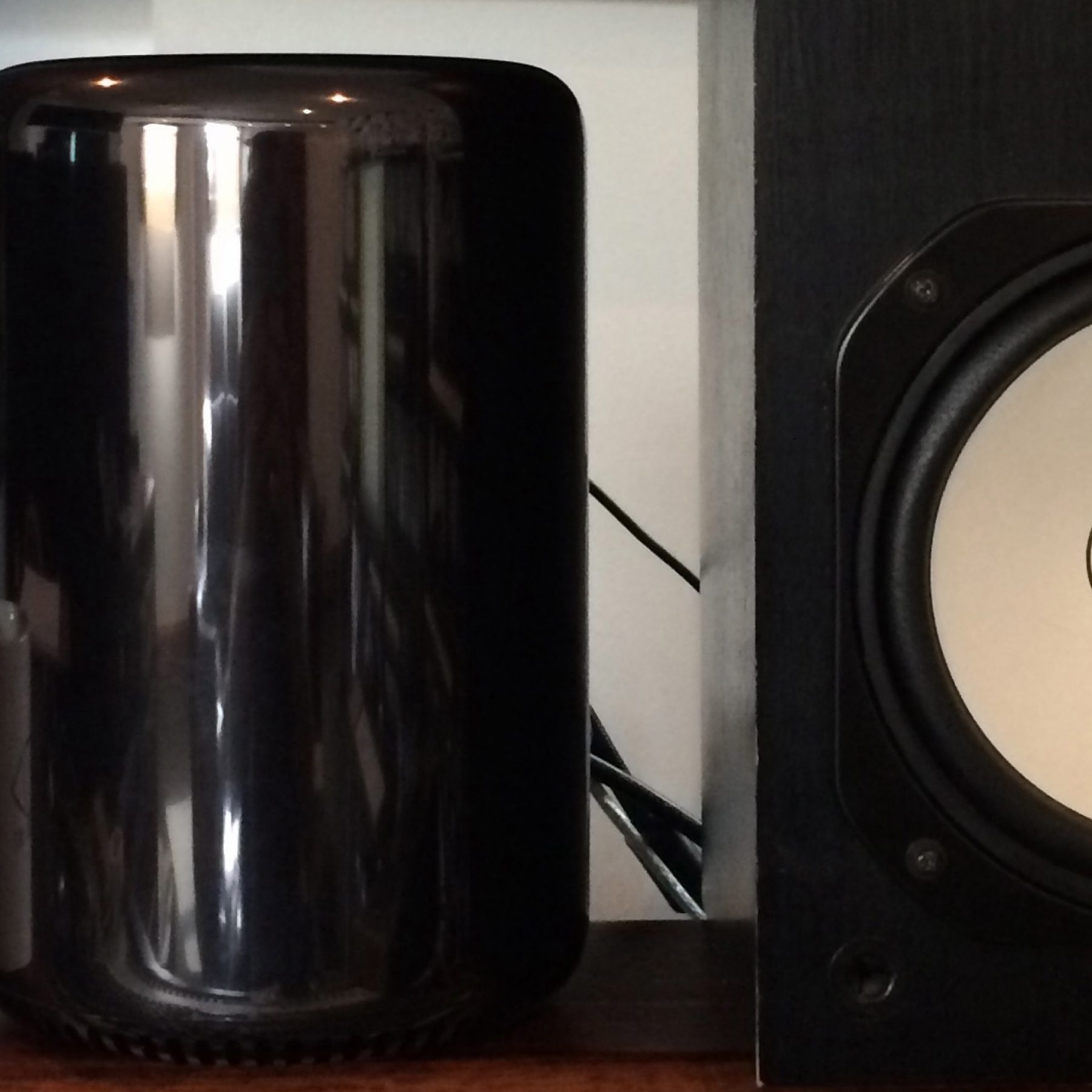 The ‘Trashcan’ Is Mighty Tiny

Whilst collating the information about the history of the Mac for our 100th issue, the obvious became even more obvious to me — Apple as an organisation has permeated almost all areas of musical life. It’s not just their computers that are used heavily for music production, but apps on the iPhone and iPad have turned these devices into everyday pieces of music hardware too.

Then of course there’s Apple’s own DAW, Logic. Plus, the iPod and iTunes have all become more or less the standard software and hardware to consume music on. Why bother, you ask? Well, if we audio producers don’t keep one eye trained on consumption trends, we could be barking up the wrong tree.

Mac Notes has now become Apple Notes for this very reason. Of course, Mac computers are still going to a big focus of my columns — Mac Pro review part one below — I’ll just be including a bit of everything else, too. So, let’s start with a few goings-on in Apple land.

Apple’s Carplay is essentially an integration of iOS7 into a compatible car’s entertainment /navigation system. Music is a large part of this, with Spotify, Beats, iHeartRadio, Stitcher and Apple’s own Podcast apps already compatible, all controllable via the touchscreens, steering wheel controls and other buttons to control the iPhone directly. Meaning no more fiddling between devices to crank your tunes down the highway.

Now we just need the cars to use Carplay with. Apparently Honda, Hyundai, Volvo, Mercedes-Benz and Ferrari will all have compatible cars out in 2014, with 13 other partners’ models in the works. And Pioneer just announced its first three aftermarket in-dash CarPlay systems, due towards the end of the year.

The rumour mill has been turning a little recently, with ideas that Apple is seriously reviewing the way it runs iTunes. Last year, music download sales dropped for the first time, and at the same time, streaming services grew quite rapidly. Apple can’t ignore music streaming any longer. iTunes Radio is a small step in this direction, but are we going to see a fully implemented iTunes/Apple streaming service this year? As a big fan of streaming myself, I hope so. It would be interesting to see Apple approach this market, with Spotify currently holding the lion’s share.

It’s also rumoured Apple is considering an Android version of the iTunes app, to try and encapsulate users of the platform, which is now growing faster than the iPhone.

Finally, three months since the release date (and just before submitting this column) I have got my hands on one of the new ‘trashcan’ Mac Pros. Over the next few issues, I’ll be sharing my thoughts from in-the-field use of the machine. So, here’s a taster.

We all knew the new Mac Pro was going to be much smaller than the previous generation, however, its actual size is shocking. The Mac Pro’s diameter is less than an average tin of paint, at about 17cm. And it definitely wouldn’t make for a good trashcan, at 25cm high. In fact, I reckon you could stack the new Mac Pro two high and almost three wide, and you still wouldn’t be taking up the same amount of space as the old Mac Pro. Shocking!

Now (without even the smallest bit of bias), I have to say the physical design of the unit is beautiful. Despite being small, the unit is solid and feels valuable. With an effortless click of a physical ‘unlock’ switch, the machined aluminium cylindrical cover simply slides off to reveal the various motherboards, ram and flash storage. One practical complaint is the power button nestled at the rear of the machine amongst the power, Ethernet and HDMI ports. Whilst hiding it on the rear may look good, it’s going to be a pain for users powering up on a day-to-day basis.

Another design coup is the fan. Turning the unit on, this was the first thing I noticed (or didn’t notice?). It was dead quiet. I tried to measure the exact noise level of the fan, but it wasn’t above the noise floor in the (soundproof, very quiet) studio. Unless I have my ear on top of the machine, I can’t hear it. As I punish it (or try to) with tasks over the coming weeks, I’ll be keeping an ear on this. Perhaps as it works harder, it will also work louder.

As soon as I started using the machine, the ‘speed’ became very apparent. I say ‘speed’ because at this stage I’m not sure if it is due to the new flash storage, or the faster processor, or both. But for example, booting the computer takes under 12 seconds from pressing the power button to seeing the login screen. Other everyday tasks like opening applications and changing system preferences are also lightning fast — hitting option-F11 (to open System Preferences and go the Sound pane) happens instantly as I hit the keys.

Unfortunately, with limited time between receiving the machine and writing this, I’ve only been able to run up Ableton Live to finish off some production tasks. It wasn’t anywhere near the most strenuous of sessions, but running Live at a buffer of 64 samples, with an Apogee Quartet, for a full day’s work of recording and editing was zippy and trouble-free.

Doing a quick benchmark test, I nearly fell off my chair when I tested the internal drive’s speed. Using Blackmagic’s Disk Speed Test (as discussed in Issue 98) I found I could read and write at a speed of 950MB/s (as a comparison, my Retina Macbook Pro does 477MB/s read and 397MB/s write). Any lingering thoughts over whether a separate recording volume is a necessity can now be vanquished. Though with limited internal capacity (due to being flash storage), you’ll still need external drives for archiving or long-term storage.

I have this Mac Pro in my possession for the next six weeks or so, so over the next couple of issues I’ll be looking further in depth at just how well this machine performs in real life music production scenarios. Stay tuned.