Zoom’s tiny F6 uses 32-bit floating point converters to overcome the need for user-adjustable input gain. How does it sound?

I recently reviewed Zoom’s F8n [see issue 132] and both it and their new F6 demonstrate that Zoom is continuing a strong evolution of design in its products. There will never be a single device that is perfect for all needs, but the F6 is an interesting development that is, in many ways, a real game-changer for location recording.

I take a pragmatic approach to the equipment I use; the best tool for a job is the tool that lets me get that job done. That means I judge microphones and recording equipment with my ears, not by some arbitrary value of reputation. The ultimate test of any equipment is if you trust it enough to use it for paying gigs. This review is based on my experience using the F6 while capturing content for a current project.

The F6 is tiny but surprisingly sturdy. Zoom has moved towards more robust housings for their units, which I very much appreciate. Weighing just 500 grams, it’s about a quarter of the weight of my current main recording device – that’s an important consideration for location recording.

It has a standard 1/4 inch camera thread on the bottom, allowing it to be mounted on a camera tripod. One of the best features is a supplied bracket that screws on to the top, as seen on Zoom’s other F series recorders; this allows a camera to be mounted on top, but with the right thread adapter it could also be used to mount a microphone or stereo bar. Combining the F6 with a tripod and top-mounted mics gives you a free-standing rig that would be excellent for environmental recording.

The F6’s interface is clear and easy to read, and I was quickly able to navigate the menus without needing the manual. The buttons are simple and easy to use, with the exception of the power button which is hidden on the side. I didn’t mind this too much as it avoided accidental triggering, but it was tricky to switch the F6 on and off without specifically looking at it. Don’t try this in the dark without a torch.

The six inputs all use full-size XLR sockets rather than miniature TA3s or similar, which is interesting considering the F6’s small size and means you don’t need special cables or adapters. Unlike Zoom’s other F-series recorders, the F6’s XLR inputs are not combo connectors; if you want to plug a guitar or keyboard into it you’ll need a DI box for guitars or an adaptor cable for keyboards. This suggests that the F6 is intended for location recording rather than for recording musicians, although it can also be used as a USB interface.

The F6 includes a comprehensive SMPTE timecode system built around a Temperature Compensated Crystal Oscillator (TXCO) that claims an accuracy of 0.2ppm, with timecode in and out on a single 3.5mm TRS jack. SMPTE is not something I’ve ever needed for my work, so I did not test this feature.

I’m a big fan of the powering options provided for the F6. It comes with an internal battery bay and adapter in which you can mount four AA batteries. It also allows you to directly attach Sony L-Series rechargeable batteries, and, finally, it can be powered via a USB 2.0 cable. The optional AD-17 AC adaptor actually connects via the USB port, so it should be easy to power the F6 from a power bank or from USB bus power when used as an interface. The combination of these three options gives you a wealth of choices for powering the unit.

The F6 automatically assigns inputs to tracks: input one to track one, input two to track two, etc. It can also capture a stereo mix of all the tracks made from the internal mixer during the recording; an option that’s available for most of the recording modes. Even though the F6 has six XLR inputs it can record many more tracks derived from those six inputs, depending on the chosen recording mode.

A real game-changer for location recording

One aspect of the F6 that I find unusual is the setup of the input gain. Zoom decided that because of the wide dynamic range of the 32-bit converters (wider than any microphone can produce) there is no reason for the user to adjust the input gain when recording the 32-bit Float files. The input gain is a set value locked within the device, and optimised for the 32-bit AD converters. The Trim control only affects the recorded level of the 24-bit or 16-bit wav files and the mp3 files, which are all derived from the 32-bit Float signal and amplified or reduced accordingly. It is essentially a post-process as you would apply in your DAW after transferring the files.

This goes against everything I was ever taught about recording audio. The rule of thumb was always to record as strong a signal as possible while avoiding peaking, so that there is less chance of introducing unwanted noise from within the signal chain. The F6 removes this choice and applies its own gain. I will say that from my experience so far it does a pretty good job, but as a professional device I don’t think it should be making these kinds of decisions for me.

For quiet content I found that using the 32-bit Float files did introduce a bit of unwanted noise because of the need to boost them to workable levels in post. Nonetheless, if you’re using the F6 in Dual mode and using the 32-bit Float files as backups in the event of clipping the Linear PCM files, you’re not going to be worried about a bit of noise if it makes the difference between a useful recording and a clipped recording.

If it is possible to change this in a Bios update, so the user has the option to adjust the recorded level of the 32-bit Float files, I would request that Zoom consider doing so because it is the one aspect of this device that I am uncomfortable with. It’s certainly not a deal-breaker, but it is an odd choice.

Regardless of my concerns about the lack of a gain control for the 32-bit files, I will say that the F6 does an excellent job of capturing high level input content. I placed it within a couple of meters of a high-speed country train passing by and also at the end of a runway where airliners were taking off, and the clarity of the captured sound was wonderful. For years, I have spent a lot of time riding input levels on 16-bit and 24-bit devices to capture a strong signal without introducing distortion, so the ‘fire and forget’ nature of the F6’s 32-bit Float recording mode is well worth the price of entry.

The 32-bit Float format is extremely important to our industry, but it is also a complex topic that I will cover in more detail in a later issue.

Dynamic range is measured as the difference between a device’s noise floor and its maximum level before distortion. According to the user manual, the F6 has an EIN (Equivalent Input Noise) of -127dBu and a maximum input level of +4dBu on the microphone inputs, giving it a dynamic range of 131dB. With over 1500dB of dynamic range to play with, the F6’s converters are easily able to accommodate the 131dB of dynamic range offered by its analogue input circuits and deliver a signal that never clips – unless the input signal exceeds the maximum level the analogue input circuit can handle (+4dBu for mic input, +24dBu for line input), in which case a message saying ‘Exceeding maximum input level’ appears. To fix that, the user needs to reduce the output level of the source signal.

The F6 uses two AD converters per input channel, working together in a configuration known as ‘gain ranging’, with one converter for high level signals and the other for low level signals. The outputs of the two converters are used to create a 32-bit floating-point signal that captures the full dynamic range of the analogue input signal. So the F6 offers 131dB of analogue dynamic range embedded comfortably into the 1500dB offered by the 32-bit floating-point format, with plenty of room to move for peaks. The microphone’s diaphragm and/or internal circuitry will distort long before the 32-bit signal runs out of headroom. – Greg Simmons 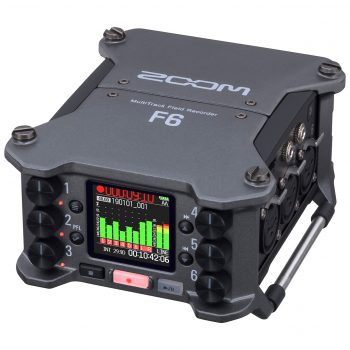 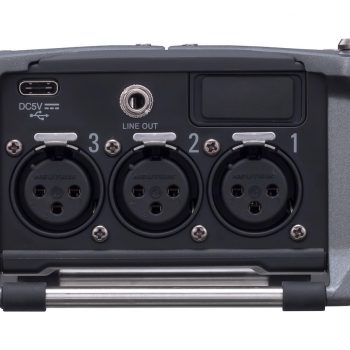 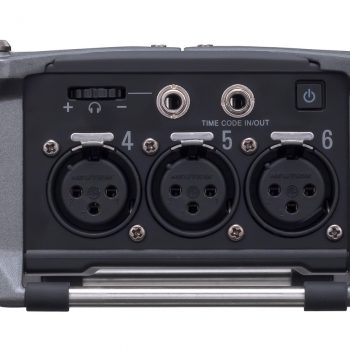 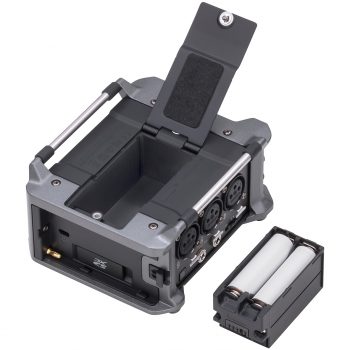 Standard size SD cards (SDHC and SDXC) are the capture media for the F6, with the SD slot hidden behind the rechargeable battery bay. SD cards up to 512GB capacity can be used, giving many hours of continuous recording.

Sampling rates from 44.1k to 192k are available, but some of these have limitations depending on the number of tracks and the recording mode you’re using. For example, there is a useful ambisonic linking format for those using ambisonic microphones: it syncs up the input levels for four channels, but limits the sampling rate to 96k when recording at 32-bit. I found it was a balancing act between the number of channels and the available sampling rates. That said, I am pretty sure I have experienced this with every recording device I have ever used. Similarly, the pre-record function offers between one and six seconds of pre-record time, depending on the sampling rate.

The F6 also offers wireless control by purchasing the optional BTA-1 Bluetooth adaptor and downloading the accompanying app, but the app is only available for Apple devices. This is something Zoom does that I find strange. I am aware that Apple is the dominant smartphone seller in Japan and with Zoom being a Japanese company I can certainly understand why they would develop the app for Apple phones. But the number of Android users worldwide is a massive market, so I really cannot understand why they would not provide this function on Android devices as well. I was unable to test this feature, but I’m sure many would find it useful.

Overall the F6 is a device I can see myself using on a regular basis. It is small, lightweight, simple to use, and, most importantly, it captures content effectively in the current take on 32-bit Float recording. I need a device that does this, and the F6’s price point makes it a very appealing choice.

In an industry where some of the big companies have become complacent with their products, I really enjoy seeing Zoom strive time after time to advance their product line. And while not all their devices are must-haves, I think the F6 just might be.