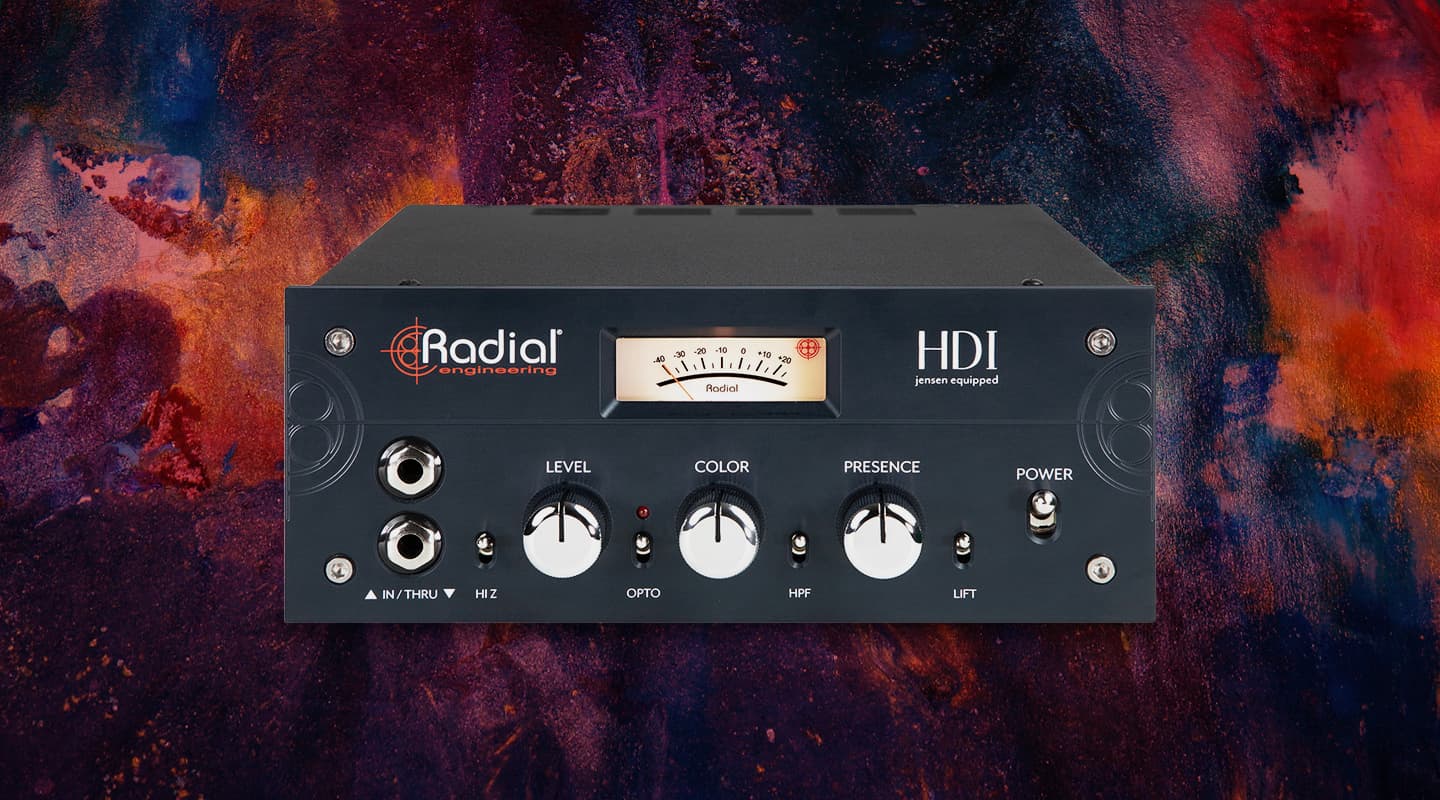 I’d be interested to read the Behringer DI100 sales figures. Since its release, bearing more-than-passing-resemblance to the legendary moss-green BSS AR133 DI, the Behringer DI, I suspect must have sold hundreds of thousands… if not millions. They’re absolutely everywhere. I found one behind my couch the other day — I have no idea how it got there. The Ultra DI is a great product. It’s solid and sounds perfectly adequate for just about every application.

That said, nothing says ‘I care about my tone’ like the musician who swaps out a house Behringer DI for their own military-grade Radial Engineering weapon of choice before submitting their instrument’s outputs to the multicore.

The pragmatist who sees a DI box as a mere functional necessity will probably consider Radial’s offerings a bit exy. And with good reason – why pay several hundred dollars for something an Ultra-DI will do for $65? But for the ‘converted’, there’s no turning back.

At A$1699, the Radial HDI I have in front of me takes DI veneration to another level. Safe to say the HDI’s target market isn’t for the ‘I only need a DI to turn my acoustic guitar output into XLR’ types.

No, the Radial HDI is for the post-enlightenment crowd who believe a quality DI box is as crucial to a signal chain as the instrument itself.  Inside this beauty are two fully discrete circuits, two oversized custom-wound Jensen transformers, extra I/O for creative connections, a built-in opto compressor, and, just for kicks, a retro VU meter.

Shut up and take my money!

Before diving into what makes the HDI special, let’s recap the direct injection (DI) concept. A musical instrument such as a bass or acoustic guitar, keyboard, or effects pedal, or even a laptop, usually outputs a high impedance unbalanced signal. This means the signal is at a low level (thanks to the high impedance) and susceptible to being polluted by noise and interference over longer cable runs (thanks to being unbalanced). The real problem is that the preamps on mixing consoles and audio interfaces are designed to accept balanced low impedance signals for optimal gain structures and sonic purity.

Enter: the DI box. A ‘direct injection’ box uses a transformer to accept a high impedance, unbalanced signal from an instrument and convert it into a low impedance, balanced output ready for entry into a console or interface. XLR cables are designed to transport balanced signals, which is why you’ll see XLR outputs on a DI box: the two top pins carry phase reversed duplicates of the source signal which, when reversed at the other end, cancels out noise picked up along the way. An active DI compensates for the loss of level induced by the conversion process with an amplification stage.

Fittingly, given the serious piece of gear it is, the Radial HDI is about four times the size of any DI box you’ll find on a stage. That includes most of Radial’s own DIs and interestingly the HDI makes quite a notable departure from the rugged, lipped design most of its models possess. It makes sense since the HDI is aimed more toward studio use, as does the metal rackmount panels that come in the box. It’s a heavy unit with not the slightest sign of poor design or cheap construction. Each switch has a firm and definite click, and the stepped silver knobs have grippy serrated edges. Power comes in via IEC cable. A warm glow lights up the VU meter which proudly sits in the centre of the panel. The HDI has the kind of aesthetic where you can screw it into a studio rack full of expensive boutique processors and it’ll look like it belongs.

TWO ARE BETTER THAN ONE

At the heart of the HDI is its dual parallel circuitry. Both circuits feature Jensen transformers but the topologies differ – the first is designed for clean, transparent reproduction with minimal harmonic distortion. The second circuit partially mimics a tube guitar amplifier topology, running the signal through multiple stages including a triode gain stage and a phase splitter, driving the transformer into pleasing even-order harmonic distortion. Controlling how much signal is fed into either circuit is the Color knob, going from clean (counter-clockwise) to distorted (clockwise). The Level knob to its left determines how hard signal is pushed into the circuits.

The Opto compressor operates on the first clean circuit. A three-position switch dictates its function: down is bypassed, middle is active with a high threshold, and up is with a lower threshold for more compression. Winding up the Level knob drives more signal into the compressor’s input stage and gain reduction amount is indicated by the single LED above the switch. Because the compressor is on the first circuit only, turning the Color knob clockwise towards the distortion circuit results in less compression. The Presence knob is a boost-only control purely for adding mid/high frequencies.

Three other switches on the front panel offer extra control. The Lift switch lifts the ground on the balanced output. The three-stage HPF acts only on the distortion circuit and can be set to off, 40Hz, or 100Hz, both with a 6dB/octave rolloff. The Hi-Z switch goes between 200kΩ and 2MΩ and is great for playing with the instrument input’s high end response.

Safe to say the HDI’s target market isn’t for the ‘I only need a DI to turn my acoustic guitar output into XLR’ types.

Connectivity on the HDI doesn’t leave you short of options. I really appreciate that there’s a 1/4-inch instrument input on both front and back of the unit. Both feed the same circuit and the front input bypasses the rear when in use – super handy in a rackmounted scenario if you want to leave one source permanently connected to the rear and, when you need to, run another instrument through the front input without any disconnections. A Thru output passes unbalanced audio back out; ideal for feeding a guitar amplifier on stage.

Radial has thrown in a 3.5mm Synth Input on the back of the HDI, stating it’s designed for the hotter output of modular synthesizers. For this reason the Synth Input will also accept line level signal from any other source and is a good way of running anything from a mix bus to computer audio through the HDI if you want to impose its character on a non-instrument level source.

Three different outputs are built into the HDI. The Line Output emits a line level signal, negating the need for more gain by a mixer’s preamps – great if you want to make full use of the HDI’s amp stage. If this output is too hot for your interface or mixer, the pad next to it drops its level by 15dB. The Mic Output is a more typical DI output, sending mic level signal that can be gained up by a preamp on a console. This output follows the Line Output with the addition of another Jensen transformer for isolation and level reduction. Finally, the 1/4-inch unbalanced Processed Output is almost like a Thru except that it’s tapped after the input signal runs through the HDI’s circuits. Use this to colourise or compress a guitar or bass before it hits your amp or effects processor.

My Fender Strat was the first to experience the HDI difference. A DI’d electric guitar with no extra processing is nearly the driest and most uninspiring sound conceivable so I was impressed to hear the HDI bring such body and weight to the unprocessed tone. The real magic happens when the Color knob is spun clockwise to engage the overdriven transformer circuit, introducing a change in tone that’s anything but subtle. Clean and accurate reproduction on the left swings toward thick, warm and rich on the right. To my ears the level increases too. Low end blossoms out and a faint fuzz textures the mids and highs. As I dialled up the Level knob to drive the transformer harder, the HDI produced a very satisfying crunchy tone that, on my Strat, wouldn’t need much else to be recordable. Adding more air and grit with the Presence control works a treat on darker sounding electric guitars. As a bass DI you couldn’t ask for more – the distortion circuit offers meaty lows with a grungy drive, should you desire it, or head towards the clean circuit for a faithful image of the true character of your bass.

While I wish the opto compression was available on both distortion and clean circuits, the parallel compression options make up the difference. It’s fun squashing the clean circuit and finding a nice balance with the Color knob around 12 o’clock. Pushing the compressor into complete carnage was difficult with a low output instrument like my Strat but easier with a humbucker guitar or active bass. Acoustic guitar, too. Not only did the HDI breathe new life into the piezo pickup of my Martin but I love how the compressor brought a glued-togetherness to heavy strumming. A favourite setting of mine is to slam acoustic guitar with the compressor, which requires enough level to push the distortion circuit into gnarly territory, but then I’ll only add a touch of that grit to the clean compressed circuit by setting the Color knob to around 9 o’clock. Soon you start to see how the HDI brings a bucketload of tonal options to the table.

This is what sets the Radial HDI apart from any other direct box. Having the ability to slide between those two circuits is absolutely invaluable in a studio setting where the difference between a clean or saturated input stage can make or break the sonic signature of a song. It invites experimentation, doesn’t bog you down in complicated controls, and is ultimately another tool in your arsenal to find the sound in your head. The Radial HDI takes the function of a DI box and turns it into a creativity-inspiring palette to colour whatever passes through it. I can see how the HDI would become a studio engineer’s Swiss army knife – a non-negotiable front end for any instrument tracked in a recording session. It’ll do clean, it’ll do dirty, it’ll do compressed, and it’ll do a mixture of all of the above if you want that too. The Radial HDI is much more than a functional link in a signal chain. Its array of tonal potential ensures it will bring out the best in whatever you plug into it.