Beesneez’ Oliver, though a younger member of the family, carries itself with an authoritative U47 mid-forward stance.

Beesneez is one of Australia’s favourite boutique microphone manufacturers and a great example of what individuals with passion and expertise can create. The business starts with capsules that are literal re-creations of the original capsules from some of the most famous classic mics. Manufactured in Ballina NSW by Ben Sneesby, these capsules go inside impressive, hand-crafted microphones that take their sonic inspiration from the greats, but share the modern Beesneez family look. The personal touch extends to naming the mics after the family’s children, nieces and nephews — young Oliver should be pleased with his namesake model. Part of Beesneez more affordable Studio Series range, Oliver is a large-diaphragm, multi-pattern tube mic with a voice based on the U47’s mid-forward style of sound.

It’s a fairly simple side-address, cylinder design with cut-outs front, rear and top providing access for the soundwaves to reach the capsule, but the handy size and cool colour (dark green in my case) combined with the textured surface make it a pleasure to hold as well as behold. The hand screwed metallic badge completes the look and boldly identifies the brand. It’s a practical design; the mic has a bit of weight to it and is bottom heavy, but not so big that it feels insecure on a stand, and remains easy to place in tight spots. The double-mesh grill protects the capsule and helps hold off plosives. The supplied shock mount is kinda generic but functional anyway. A seven-pin socket on the bottom of the mic connects it to the outside world and that’s it — no HPF, no pad. The supplied power supply drives the tube, selects between nine pick-up patterns and provides a good strong signal at the XLR audio output. There are no level controls, or even a power-on indicator light, but who needs them anyway, you can hear if it’s on.

LEADING FROM THE MIDDLE

In use, my first impression was that the mic presented as advertised. It sounds like a tube mic and sonically leads with the mid-range. It’s not a shy mic and I found it was easy to pick Oliver out of a line-up of mics I was using for comparison. There’s a real presence across the vocal range that pushes the source forward, and the hint of valve peakiness gives the sound a familiar, almost retro quality. The high frequency range above 4kHz is accurate and extended but not too prominent, and sibilance doesn’t spit back at you when recording vocals.

The lower frequencies are quite neutral with a fairly strong proximity effect up close, and no HPF… so don’t put it too close to something rumbling. Getting right up on the mic brings in some rich lows that work well on intimate, breathy stuff. Harsh or strident vocals may benefit from a reduction in some mid frequencies unless they need to cut through a loud mix. Oliver will pop if provoked, even though the protective grill does a good job stopping them you should use a separate filter anyway. Recording instruments exercises more of the mic’s highs and lows and both ends of the frequency spectrum sound good if you give them a boost.

Oliver’s primary use would be recording vocals but it’s one of those mics that you could put in front of anything just to hear how it sounds, you may or may not go with it but it will give you a different view of the source. Above a drum kit it adds a pleasing touch of garage to the sound and this would be a good mic for a simple kick and overhead drum recording. I found it also added some nice aggression to guitar and bass cabs. It’s a good rock mic and you could record a whole band with it.

The luxury of nine polar patterns increases Oliver’s flexibility. The thump when you change the polar pattern setting on the power supply is my only complaint. It’s always handy to have control over the pickup area and the more you use different patterns the more you get into them. You can record the main vocal on cardioid then switch to omni for what I call a flock-of-blokes backing vocal where they all stand around the mic, then double it for a huge sound. The off-axis response has a few bumps and dips in the most-used cardioid pattern but the tone stays fairly accurate. The handling noise is quite high but it’s not a live vocal mic so you won’t notice as long as it’s not handled during a recording.

The Beesneez Studio Series sits below the company’s Producer Series but shares many of the most important electrical components. The Studio series aims to trade off a few luxuries for a popular price point and there’s a wide range of models to choose from. As well as the U47-style Oliver (also available as cardioid-only) there is sister Shelise with shinier C12 stylings, the Judas ribbon mic (with a tube version), Isobel  sporting a LDC FET design and Lulu, the SDC FET aimed at re-creating the KM84 sound. The Oliver has piqued my interest, I’d like to hear them all.

You get good value with the Oliver, it’s a high-quality mic with a distinctive sound and looks built to last. I like that it’s made in Australia by a family who care and I’d be confident their personal support and back up would be there if it was ever needed. 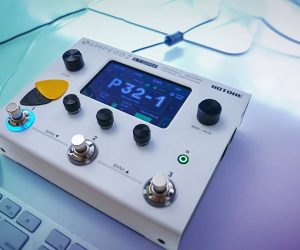