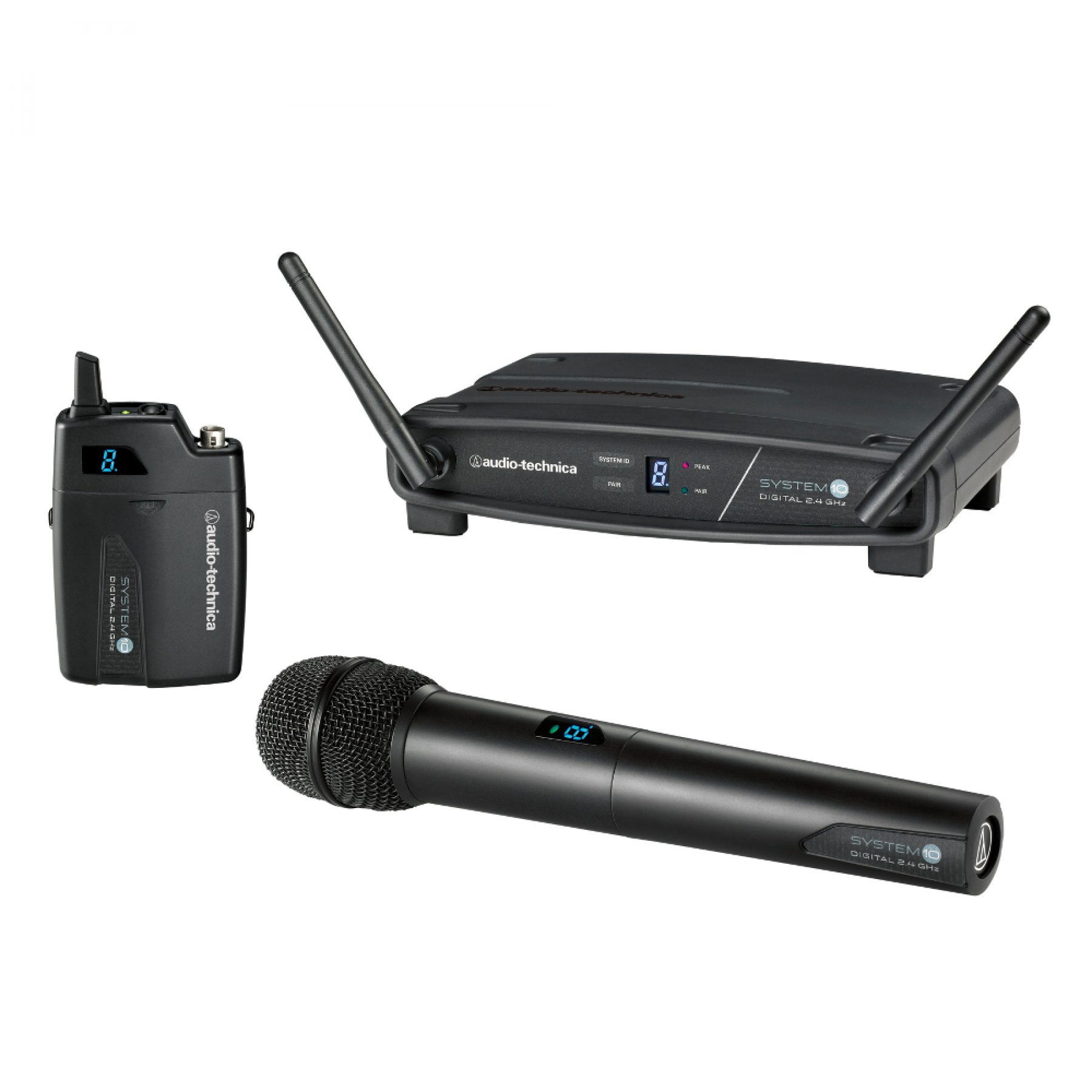 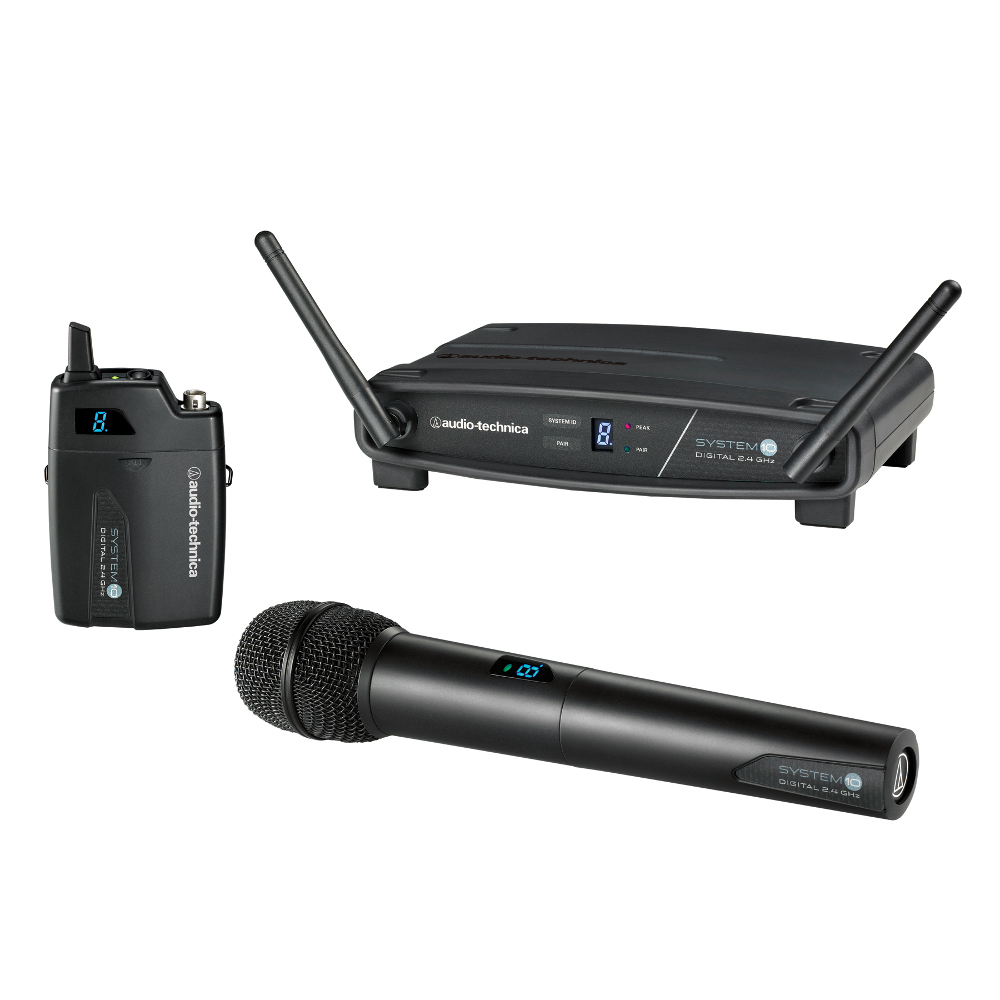 Audio-Technica’s System 10 plays out in the Wild West of the radio spectrum, but has the diversity to handle the tough situations.

wireless system operates in the ISM transmitter and the receiver on-the-fly. The (Industrial, Scientific & Medical) 2.4GHz range frequency shifting is silent so the user is unaware of radio frequencies. The advantages of working of any of this backstage processing.

in this range include international compatibility, lack of government regulation and freedom from interference from TV and DTV signals. On the flipside, the same band hosts a wide range of devices including Wi-Fi routers, wireless phones and mouses, Bluetooth, microwave ovens and cardiac pacemakers. This makes it a very crowded frequency range, which creates its own issues (see ‘Everybody’s Favourite Band’ sidebar).

Designed as an easy-to-use, eight-channel, entry-level wireless system the System 10 range starts with the ATW-R1100 receiver and a range of body-pack and handheld transmitters. Unlike analogue-based UHF, System 10 is a digital system. It operates at 24-bit/48k resolution with a quoted 20Hz-20kHz frequency response, 109dB dynamic range and better than 0.05%THD. The in-line, switching power supply works with voltages between 100-250V.

ON THE RECEIVING END

The ATW-R1100 receiver is housed in a stylish plastic case that doesn’t feel very strong, but receivers usually sit somewhere out of the way, so you wouldn’t expect it to cop much rough treatment. It’s a familiar size, lightweight, and designed so multiple units can be securely stacked on top of each other (despite a warning in the manual to keep receivers at least 1m apart from each other for best performance). Connections are made on the rear panel with a balanced XLR and an unbalanced ¼-inch jack socket for output to a mixing console, and a small but easy-to-use rotary volume control. A handy summary of how to pair the receiver to a transmitters is on the bottom of the receiver.

The adjustable antennas are mounted on the front panel that also contains a small window displaying the system ID number, and two buttons that are used to change the channel or pair the receiver to a transmitter. One of the main features of the System 10 is its ease of operation; straight out of the box the transmitter is paired to the receiver and the exact operating frequency is selected automatically. If multiple units are being used each unit will select a clear frequency as it is powered up.

DIVERSITY IS THE KEY

As the possibility of interference from other devices is quite high, the System 10 plays a sophisticated game of cat and mouse to dance around any potential problems. To maintain signal integrity, it employs three different measures to avoid dropouts between transmitter and receiver; frequency, time and space diversity. Frequency diversity uses two different frequencies to send the data, Time diversity sends packets of data at different times and Space diversity uses two antennas on each transmitter. If the unit is experiencing interference and runs short of error-correction while being used, it During my testing I didn’t hear any interference and couldn’t induce any audible artefacts by simultaneously using the System 10 in close proximity to mobile phones, Wi-Fi, or setting the receiver on top of a microwave oven. The only clue that there is some time-consuming processing going on is the inherent latency of the system. Testing with a round trip latency program revealed a consistent latency of around 4ms. This is quite high for a fairly simple device (it’s higher than most digital consoles) and while it’s not an unmanageable length of time on its own, when combined with the latency of a digital console and/or other digital processors it could result in a total latency long enough to be audible and distracting for a performer using in-ear-monitors.

There are two transmitter devices in the System 10 range; the ATW-T1001 UniPak belt-mounted transmitter and the ATW-1102 handheld microphone. The ATW-1001 UniPak has a locking 4-pin connector with a short lead that accepts either a guitar (or instrument) cable, a headset microphone, a black or beige over-ear microphone or a clip-on lavalier microphone. It’s a pleasing shape with the stuff you need handily placed on the top of the unit. The antenna is short, the four-pin connector is recessed, the off/ on/standby soft-touch button is easy to feel and the multi-colour battery level indicator light is easy to see.

The front cover slides off to reveal the battery compartment and a small button used to activate the pairing function. Also included, in its own little holder, is a small plastic screwdriver that can be used to access the recessed level control. Any small screwdriver will do when/if the supplied one gets lost. A good-sized and strong metal clip secures the unit to the user’s belt. The UniPak transmitter is made from the same plastic as the receiver and at 100gm without batteries it’s light enough, but doesn’t feel impenetrable… I suspect it would survive being dropped, but not stood on.

The ATW-1102 handheld microphone is probably the same. The long body is light and while it’s comfortable to hold, it’s not very well balanced with the weight biased towards the capsule end. To turn the mic on you hold down an unlabelled soft-touch button on the bottom of the mic body for a couple of seconds. A small screen on the side of the mic body indicates the channel number and a green light lets you know it’s on (it turns red in standby). Once it’s on, pressing the button on the bottom instantly toggles between on and standby… which is handy as the handling noise is quite pronounced. It’s not a problem when you’re using the mic as you tend to hold it quite firmly but it is noticeable moving it around in your hands when you’re holding the mic in-between singing or

talking. Wireless mics are often turned off, or muted, when not being used and this switching arrangement works well. It requires a definite action to turn the mic on or off. And when it’s on, the instant switching to get to and from standby means you’ll only miss a couple of words if you forget to release it from standby mode… rather than half a sentence while you wait for the unit to turn on.

The ATW-1102 handheld microphone uses a dynamic capsule with a cardioid pattern. The voicing is well-suited to vocal use, especially spoken word. The high-frequency response is not exaggerated and it doesn’t emphasise sibilance. A frequency response plot is not included but it sounds like there’s a gentle presence lift in the high-mids and a roll-off of the low frequencies. It works best when you’re right on the mic where the proximity effect helps to give some body to the sound. The proximity effect is well-controlled, it’s not boomy, and the mic is very good at stopping plosives. The response pattern is wide across the front of the capsule with sudden deep nulls at 90 degrees off-axis. Even though it’s pretty much an omni pattern at low frequencies it’s resistant to feedback with no particular frequencies wanting to take off easily when used with loud stage monitors. It also felt very stable; I used the mic in several busy locations and didn’t encounter any drop-outs or glitching.

Output power from the transmitters is 10mW and it provides for an operating range quoted at 30m if there are no interfering signals. I tested it at further than that, and through walls, and found no loss in quality until the signal drops out completely when it reaches the end of its range, rather than gradually getting softer or cutting in and out. This is plenty of range for most shows although some of the outdoor shows in rural settings that I do sometimes see the MC wander to the other end of the football field or further.

The System 10 is not aimed at the top end of the music market (where latency is most likely to cause problems) but it’s great value for money and will appeal to users who want a simple-to-use system that can simultaneously run up to eight signals. It would be perfect for corporate presentations or public meetings where there might be a few people on stage taking questions from the audience. The 24-bit/48k converters provide sufficient fidelity for most music acts and the UniPak beltpack transmitters would provide a reasonably-priced entry into the world of wireless stage instruments. The triple-checking diversity system should ensure stable.