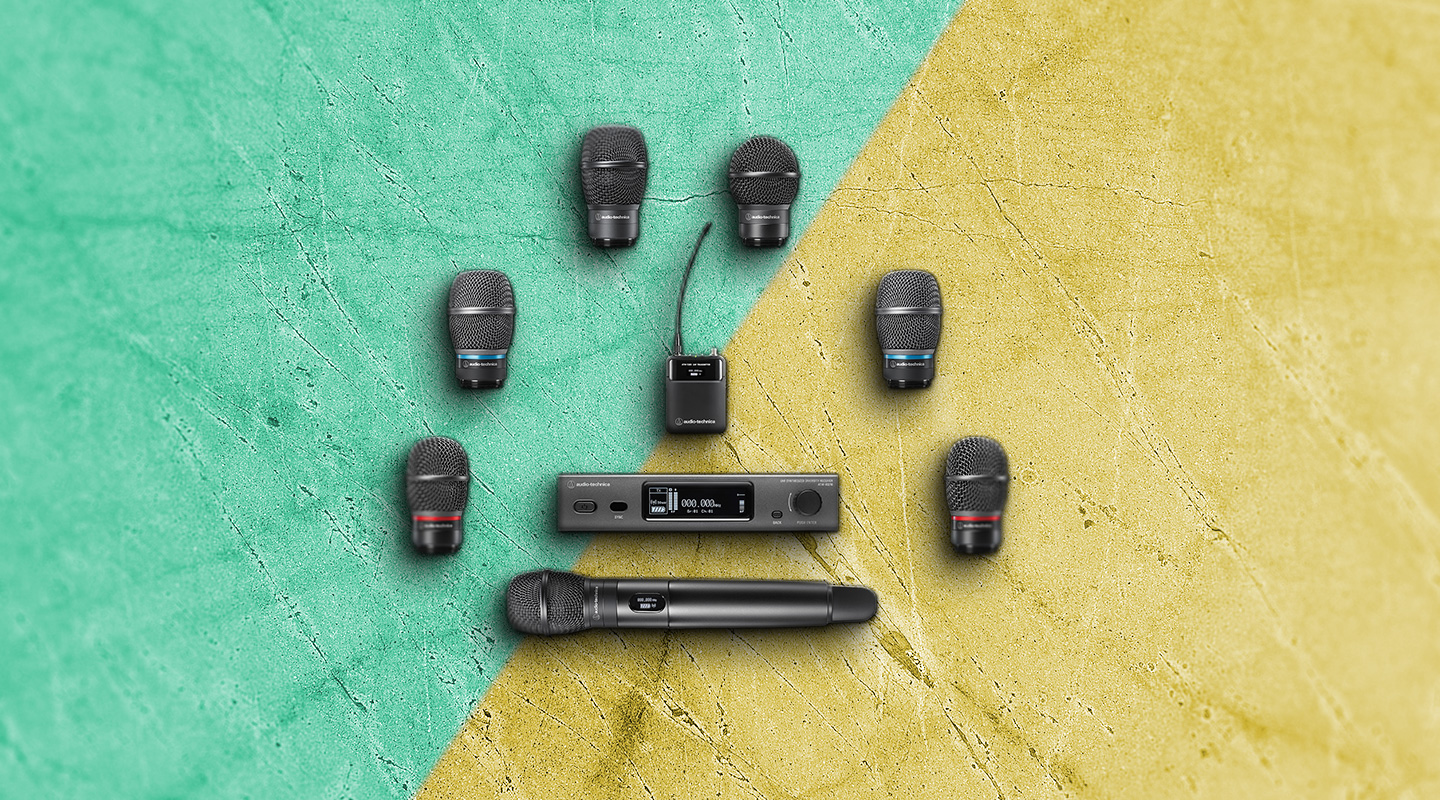 Audio-Technica’s fourth generation wireless microphone systems offer a selection of interchangeable capsules, good sound quality, ease of use, and a range of 100m.

When it comes to professional wireless microphone systems, the major manufacturers from the USA and Germany have dominated the market for some time. They have the advantage of brand recognition and well-established product lines, but there are challengers in this international battle for customers. Japan’s Audio-Technica is probably the next biggest by sales, and they’re keen competitors. Based on their range of classic capsules, they make some of the world’s great microphones for stage and studio.

The Audio-Technica 3000 Series is a professional quality FM wireless system operating in the UHF spectrum with true diversity operation (i.e. two antennas, each with its own receiving circuit). The fourth generation of the series, reviewed here, offers several improvements over the earlier third generation models including new OLED screens on the transmitters and receivers, and more interchangeable capsules. Operating in the FG1 frequency band (650MHz to 693MHz), the tuning bandwidth has been widened to a class-leading 43MHz and is capable of operating 32 channels concurrently. Also new is the ability to pre-select a backup frequency that can be quickly accessed from the transmitter if sudden interference strikes.

The centre of the system is the ATW-R3210 receiver. A new white-on-black OLED screen dominates the front panel and the display and is much sharper and clearer than regular LED screens; it can be read in daylight, for a start. Current frequency, mute status and other general info is displayed automatically. Twisting the rotary encoder beside the screen one notch either way switches the display to performance mode with big meters for RF and AF levels. The twist-and-push rotary encoder is intuitive, and navigation is made easier with the inclusion of a physical Back button. The rear panel offers the usual balanced and unbalanced outputs. Less common on a wireless receiver is the ground-lift switch.

The receiver receives its signal from either the ATW-T3202 handheld transmitter or the ATW-T3201 beltpack, both new designs and both powered by two AA rechargeable batteries – ideally recharged in the optional but convenient ATW-CHG3 smart charging dock. Great for side-stage storage, it holds two of either the mics or the beltpacks. For bigger productions a networkable version (ATW-CHG3N) allows up to five docks to be linked from one power supply.

The ATW-T3202 handheld transmitter is a new design and its metal case feels good in the hand. It’s fatter and longer than a wired mic, but well balanced and feels secure wherever you grip it. The paddle/antenna on the bottom of the transmitter contains a sheltered and configurable Mute button that can be set to either mute, disable the RF, or toggle between the working frequency and a pre-selected backup frequency. It’s raised so you can easily find it by feel when you need to use it, but it’s small and takes a deliberate action to press it down. It needs to be held down for a second before registering, so it’s unlikely to be accidentally engaged.

The other controls, including the on/off switch, are accessed by unscrewing the lower part of the transmitter body and sliding it down to expose the battery pack and nudge buttons for frequency selection and IR sync. It’s always something of a compromise providing access to the controls of a handheld mic while avoiding the natural tendency of performers to press the wrong button. Some folks won’t like the off/on switch being hidden away and it could be awkward if someone forgets to turn it on and the performer has to do it on stage (or throw it at the tech who gave it to them), but I think this is a good system, on balance. The Mute button is easy — but not too easy — to engage, and the things you should set before or after the show are all hidden under the cover.

Placed closer to the capsule than before, the OLED screen on the handheld transmitter is small but the display is super bright and easy to read. The screen lights up for a few seconds whenever the Mute button is pressed, displaying the active frequency and the battery level.

Setting up has been made as easy as possible. Available frequencies are scanned and selected on the receiver; pressing a button syncs the receiver to the transmitter, then you’re good to go. Up to 10 pre-programmed scan groups can be selected, depending on how many transmitters are required. A threshold setting chooses between prioritising the number of channels or the stability of channels.

There’s a great selection of screw-on capsules for the ATW-T3202, all based on Audio-Technica’s existing wired models. The thread mount is now standard industry size so capsules from some other brands would fit if you wanted to try them, although I’d be inclined to stick with the AT capsules to avoid any compatibility issues and ensure the capsule is specifically matched to the preamp/electronics in the transmitter.

I’ve had lots of Audio-Technica mics in regular use for some time and know them well. The regular wired ATM510 (dynamic) and ATM710 (condenser) mics are part of the Artist Series range (AT’s entry-level professional range), and they and their ATW-C510/7100 wireless equivalents are good honest mics that offer solid construction, flat frequency responses and an overall natural sound; all for a reasonable price.

The AE capsules cost a little more but they’re the highest quality and the best choice for professional applications. Based on the AE6100/4100 wired dynamic microphones, the ATW-C6100/4100 wireless equivalents are bright, quite aggressive vocal mics with extended high frequencies and a fairly accurate off-axis response. The AE6100 has long been my first choice for live drum vocals; it’s crisp, the hypercardioid pattern is tight and the spill from the kit sounds noticeably better than other dynamics. They’ve been around for a while but they now seem to be gaining popularity as vocal mics, especially with IEM users.

Even better for some acts, the AE5400/3300 large diaphragm condensers use the same capsules as Audio-Technica’s renowned AT4050 and AT4033 studio mics. The wireless ATW-C5400 version is deservedly the most expensive of the wireless capsules on offer. I regard my wired AE5400 as my highest quality handheld vocal mic and reserve it for fine music vocals… and Bluegrass; it’s my first choice as a spot mic for banjo, and works on all acoustic instruments. Smooth as silk with sparkling detail and big low-mids, I recommend it for anything except loud rock.

In a direct comparison the wireless versions sound almost exactly the same as the wired versions, and possibly better depending on your console. In theory there’s inevitably some loss of fidelity going wireless compared to using a good cable, but I can’t notice any here and the preamplification in the transmitter is beautifully matched to the capsules. I had to concentrate to pick them in a blind listening test, but with the mics in hand I could hear a couple of differences. Firstly, speaking right on the grille the wireless versions had more attenuation of the murky low frequencies. Secondly, the wireless versions have less handling noise than the wired versions. Handling noise is not the wired AE6100’s best feature, but it is noticeably improved on the wireless version. The same goes for the other capsules, too; the handling noise is not just at a lower level, it also has a more subdued character. I suspect the bigger and deader wireless body helps.

The ATW-T3201 beltpack is small, nicely made, and has a secure belt-clip. It feels tough, too. These things can take a beating, especially in theatrical applications. In the sheltered space between the antenna and the screw-in connector lives the Mute switch, with its raised tactile guide to help you feel it in the dark, and the function button that either turns the RF off or engages the backup frequency. Like the handheld transmitter, the on/off switch is hidden under the clip-down front cover along with the same set of nudge buttons. You still have to open the cover if it’s not turned on when it should be, but it’s going to be a lot quicker opening the cover on the beltpack than unscrewing the body of the handheld transmitter.

Mic options for the beltpack start with the AT831cH cardioid condenser lavalier mic: suitable for vocals and instruments, it’s a tiny little mic that sounds big. The P892cH MicroSet and BP893cH MicroEarset are different types of headworn omnidirectional condensers, available in either black or beige. Completing the line-up is the BP894cH MicroSet headworn cardioid condenser, again available in black or beige.

The system seems rock-solid in use. Auto-squelch maximises the claimed 100m operating range so that’s unlikely to be an issue, and once the frequencies are synced you don’t have to think about it much – just enjoy the sound. Battery life is eight hours or more with good alkaline or Ni-MH batteries. Sitting the transmitters in the ATW-CHG3 charging dock kept the rechargeables charged, and the routine reminded me to turn them off after use. I did keep accidentally unscrewing the grill over the capsule when trying to change capsules, but they don’t get changed often in normal use.

Punk icon Lydia Lunch played the Theatre Royal in Castlemaine as part of her angst-filled spoken-word tour, ‘Dust & Shadows’, and just happened to ask if I had a wireless mic. She wanted to appear at the back of the room and walk slowly through the audience, speaking in a ghostly voice. It was a dramatic start to the show. For a moment I wondered if the sound was going to feed back as she walked right in front of the PA speakers, but not a hint. The ATW-C6100 drew immediate praise from the artist, who was impressed by its response with the mic held at arm’s length. It sounded great, shiny and detailed, dripping with reverb.

All Audio-Technica gear is well-made, and I’ve found their products to be completely reliable over time. I’d choose the new 3000 series over a comparable digital system because the sound quality is great, it can handle more channels, and I prefer the latency-free nature of UHF wireless transmission. Competitively priced for the features on offer, the fourth generation of the 3000 Series is aimed at professional applications where audio quality is the highest priority… and shouldn’t that be all the time? It will provide some healthy competition for the leading brands from Europe and the USA.

The system seems rock-solid in use. Auto-squelch maximises the claimed 100m operating range so that’s unlikely to be an issue, and once the frequencies are synced you don’t have to think about it much – just enjoy the sound.