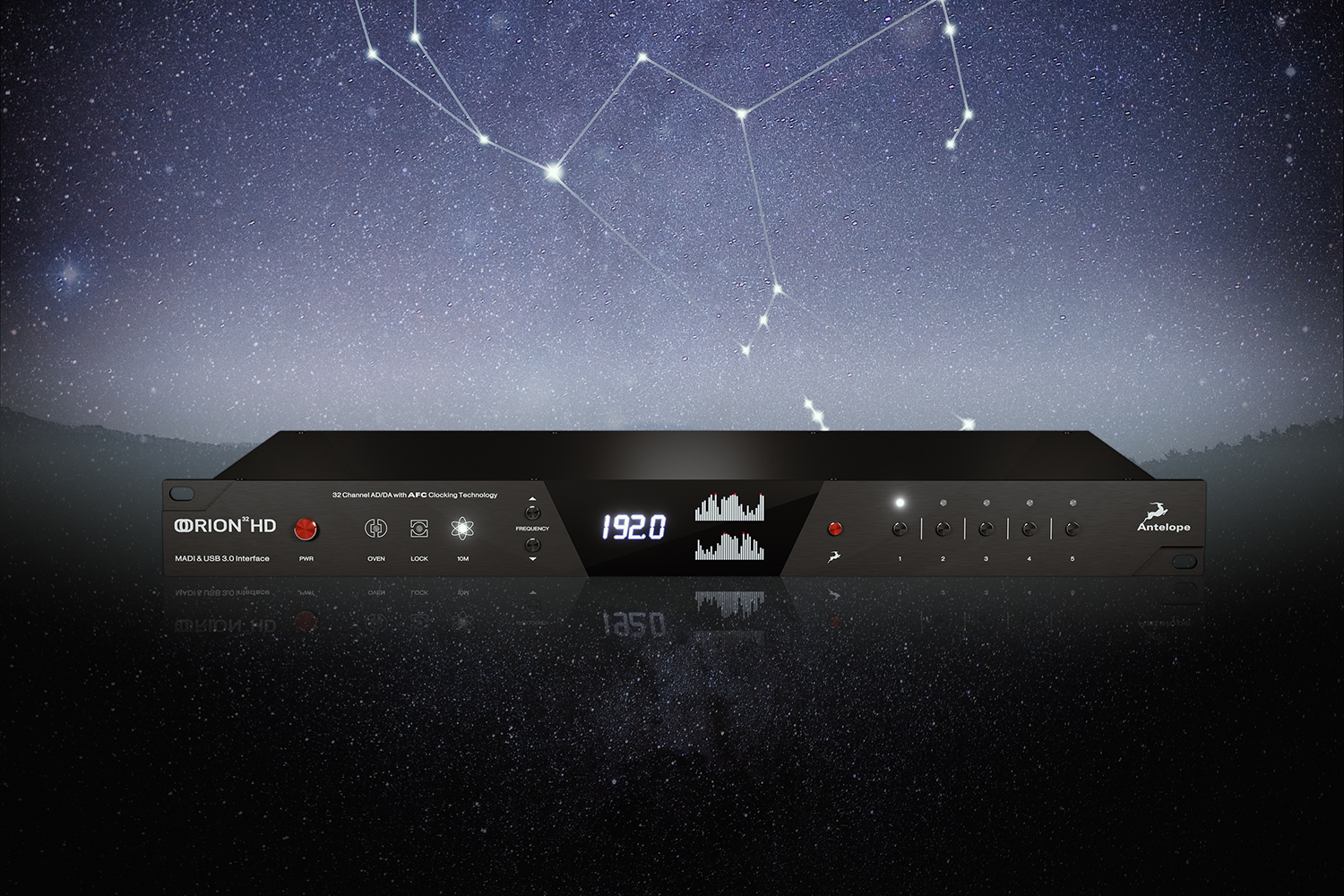 The Orion 32+ Gen 3 is the latest evolution of Antelope’s Orion series of interfaces. Benjamin Lancaster put it to the test...

Let’s just begin by saying that, as a long-time Apogee devotee, I had some serious soul searching to do after a fortnight with the Orion 32+ Gen 3 audio interface. This is a professional interface for those in search of pristine conversion and hyper-flexible integration. It offers 32 analogue line level inputs, 32 analogue line level outputs, a stereo analogue monitor output and a range of digital I/Os including MADI, ADAT and SPDIF.
There are connections for wordclock in and out, and Thunderbolt and USB-A ports for interfacing to your computer. Antelope’s marketing materials claim exemplary A/D and D/A conversion, flawless clocking thanks to their proprietary 64-bit Acoustically Focused Clocking (AFC), and super-low ‘sub-millisecond’ latency.
I was keen to test the Orion in my ‘Analogue DAW’ recording rig (see AT133). The setting up process was a fairly typical affair for anyone who has integrated hardware into their DAW. Online registration and downloading all the affiliated software was par for the course, and I was up and running in a little under 30 minutes.

Marrying the Orion with my current setup was fairly seamless. The eye-watering array of I/O options have pretty much every engineer’s connectivity preferences covered and, through a miracle of engineering, the comprehensively-equipped back panel is so neat and tidy you could set your watch to it.
The stereo Monitor output uses a pair of TRS sockets, making it easy to connect to. The rest of the Orion’s analogue inputs and outputs are accessed via D-Sub connectors conforming to the eight-channel AES59/Tascam wiring format. These, along with the Orion’s broad range of digital options, means it would be difficult to find a piece of gear you can’t connect to it – assuming you have the requisite cabling on hand! The Orion does not come supplied with the D-Sub breakout cables needed to actually use it, although to be fair Antelope cannot anticipate how many looms, what lengths and what type of connectors each user would require on the end of those looms; some would want XLRs, others TRS, and even others might want to solder it directly to a patch bay. Just be warned that before you can plug it in you’re going to be in the red for at least one D-Sub cable of some design or another. This is not plug-and-play technology!
For this review I opted to go straight from the outputs of my Analogue DAW’s preamps into the Orion’s D-Sub analogue inputs. While making all of those connections I found myself daydreaming about how brilliantly the Orion would handle multitrack recordings of live shows by connecting to the digital output of a live console via a single MADI connection. With its stable build and near limitless routing abilities, it would be more than comfortable in this situation.

At first glance the Orion’s software panel is sleek, modern, well designed and, most importantly, scalable!
There is nothing worse than a minuscule panel on a 27-inch screen that you cannot see, let alone operate; so, thank you Antelope! Tabbing through the different sections while making selections is seamless and intuitive. The Mixer is laid out over five windows to represent the seemingly endless channels, and cycling through them is a breeze.
The wheels began to come off the cart for me in the Matrix section. Let me be very clear that this is an evaluation from an ordinary person trying to make sense of an extraordinary routing system, and the fault here does not lay entirely with Antelope. The Matrix section is, in a word, brilliant; however, some of the labelling decisions are questionable. Though the Matrix is colour-coded and it is easy enough to assign I/O, I got completely confused trying to assign outputs to my monitoring section. The loose cog in the machine is in the naming of the I/Os. ‘TB Play 1-32’? If you are like me and did not initially watch the videos or read the instructions, ‘TB Play 1-32’ could be anything! What I later discovered is that it’s the assignment for ‘Thunder Bolt Playback Channels 1-32’ – the digital returns from your DAW via Thunderbolt. Once this got cleared up, the ability to route DAW outs to the Orion’s analogue outputs became blatantly obvious and actually quite easy. Maybe Antelope should re-label it as ‘DAW Returns 1-32’ or similar for those of us who are keen to get started without watching videos or reading instructions!

Low latency is one of the big talking points of the Orion series, and for good reason. The ‘sub-millisecond’ (ie. less than one thousandth of a second) latency is not long enough to throw off any musician, and I would call out those who say they are affected by it. For me and the artists I worked with – and this included Midi-based musicians – the Orion performed outstandingly. With an electronic drum kit triggering Kontakt’s ‘Abbey Road’ series of drum kit plug-ins, the response and feel of the audio coming back through the monitoring section was smooth and felt to be in perfect time. Recording audio was obviously no drama due to the vast number of channels; the only limit was how many preamps I was able to stick in front of it!
The Orion’s software comes provided with a number of DSP plug-ins from their FPGA FX platform, including their Master De-Esser, Power Ex expander, Power Gate, Power FFC compressor, Clear Q five-band parametric EQ, and Aura Verb reverb. Additional plug-ins can be purchased and added later, with over 30 to choose from. I must admit that I only gave the installed plug-ins a cursory glance because I already have an exhaustive library of top-quality plug-ins, and I assume anyone in the market for the Orion would have their own plug-ins as well. Having said that, the Orion’s built-in reverb in the monitoring section is a stroke of genius. The vocalists I recorded with the Orion were so grateful and happy to have reverb quickly added to their headphone mix without the time-sucking task of patching in a unit or dealing with troublesome DAW latency issues that often cause unnatural artefacts. By quickly dialling in a bit of reverb, I kept the workflow uninterrupted and ultimately more fruitful than it would have been otherwise. The reverb has a comprehensive feature set, sounds pretty good and serves its purpose brilliantly.

I am not a fancy man when it comes to the monitors I use for mixing records. I have a pair of Event 20/20s that I’ve made many records with; I know them well and I trust them. After installing the Orion I pulled up a current track that I’d been previously mixing through my Apogee converters. The sound through the Events came alive in a way I had not previously heard. The soundstage widened, there was greater separation between instruments, and the plane of sound felt as if it had jumped towards me by another six inches or so. The instruments that were compressed sat back in the way you would expect while the more dynamic elements leapt from the speakers, creating a thoroughly pleasing three-dimensional space. These improvements in soundstaging and separation were even more evident when I switched to my AKG K712 open-back headphones.
In addition to being an insufferable nerd about recording and mixing, I lead a double life as an insufferable audiophile. Perhaps the two are not mutually exclusive? After the Orion’s success in the studio, I decided to take it into my living room, connect it to my hifi and see how it faired in the hifi context of listening for enjoyment rather than making critical mix decisions. I have an extensive range of hifi equipment but my main system is built around a Cambridge Audio DacMagic Plus driving a pair of B&W 606 speakers through a Harman Kardon HK980 amplifier. I connected the Orion’s Monitor outputs to the HK980 with a pair of 6.35mm jack to RCA leads. I don’t think it will shock anyone who has heard Antelope’s conversion to find out that, yet again, the sound quality was peerless. The same soundstaging mentioned above came into sharp relief as the speakers breathed out Nick Cave and the Bad Seeds. It was an enveloping aural experience, but buying the Orion 32+ as a stereo hifi DAC would be a ridiculous notion to most rational audiophiles. It was fun though, and it certainly showed the capabilities of what the Orion can do. I fear my Apogee days may be limited…

I have a couple of gripes about the Orion 32+ Gen 3, and they are to do with its monitoring section and front panel. Whilst I love the idea of having routing presets, access to these from the front panel seems superfluous. I would’ve preferred a dedicated Monitor volume pot so I did not have to rely on software to control the level to my main speakers, which is not ideal and hinders workflow. It’s not a problem if you have a dedicated monitor controller, but I would prefer a front panel volume control for this purpose.
A headphone socket on the front panel would also be desirable. At only 1RU high the Orion has the potential to be a semi-portable device but offers no way of independently hearing anything coming out of it without, at the very least, connecting a headphone amplifier. I know this is nitpicking and the Orion is not marketed as a stand-alone interface, but having buttons to select routing presets seems like a waste of precious front panel real-estate when a dedicated Monitor out volume control and headphone socket would be far more useful. If Antelope is reading this, please consider these suggestions for Gen 4.
Wrap up
The Orion 32+ Gen 3 provides a perfect bridge between a console and DAW, with a near-infinite amount of routing possibilities and enough channels to handle most large format consoles. It’s poised to compete with top level studio-grade interfaces like Avid’s HD Systems, albeit with more of a ‘free market’ mindset. It’s also very well suited to live recording applications – nothing could be simpler than a MADI connection into the Orion to create a bridge from a live console to a DAW-based recording system. Those with home studios would consider it overkill for their needs; for that market Antelope offers the Zen Tour and Orion Studio HD, and they make this distinction obvious through their marketing.
At $5499, the Orion 32+ Gen 3 is a considerable investment but if you’re looking for an ingeniously-designed and spectacular-sounding alternative to the status quo of studio grade interfaces, you will be sated and inspired.

He bankrolled this hopeless bunch of kids and gave us the keys to a very expensive, well-kitted out studio, and told us to go for it