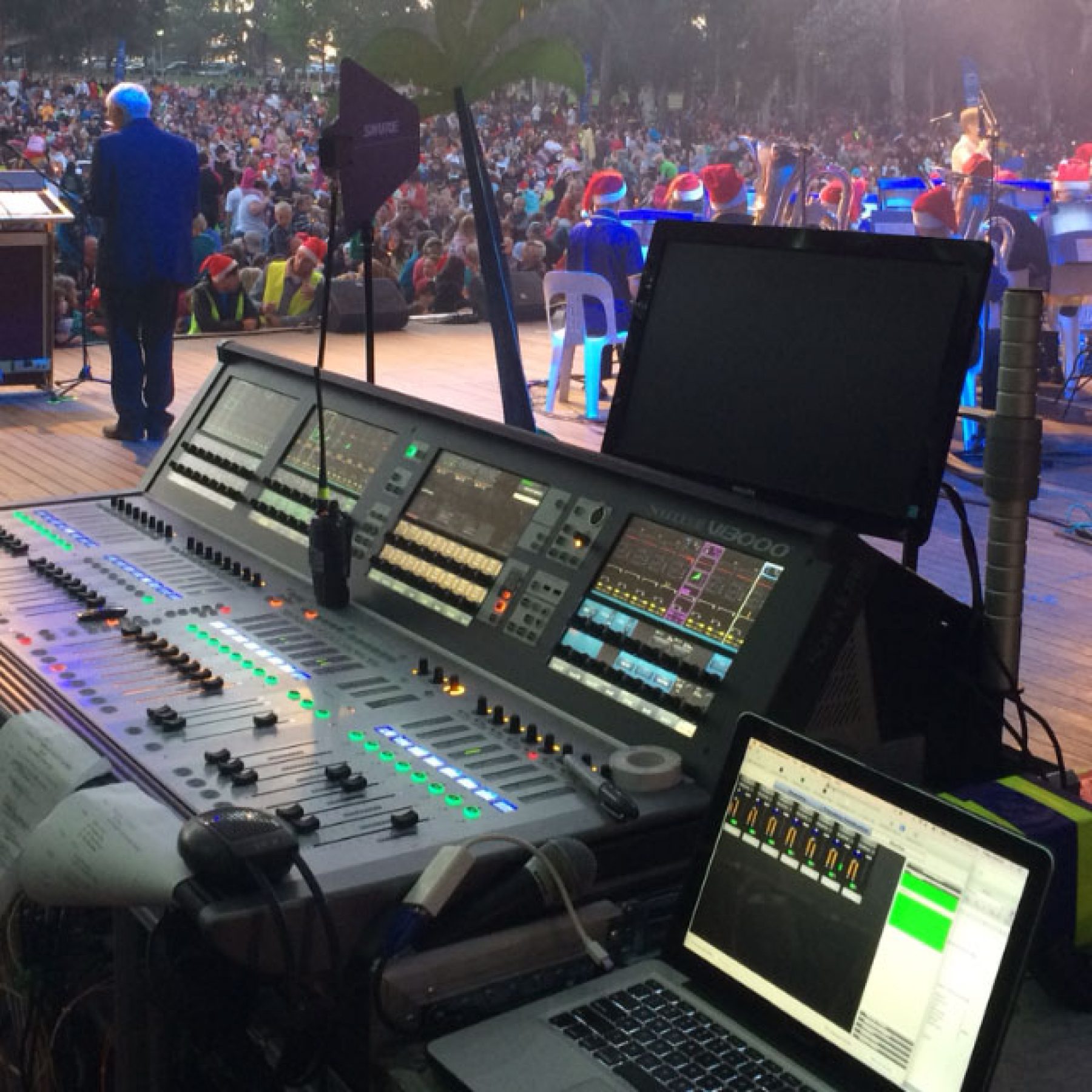 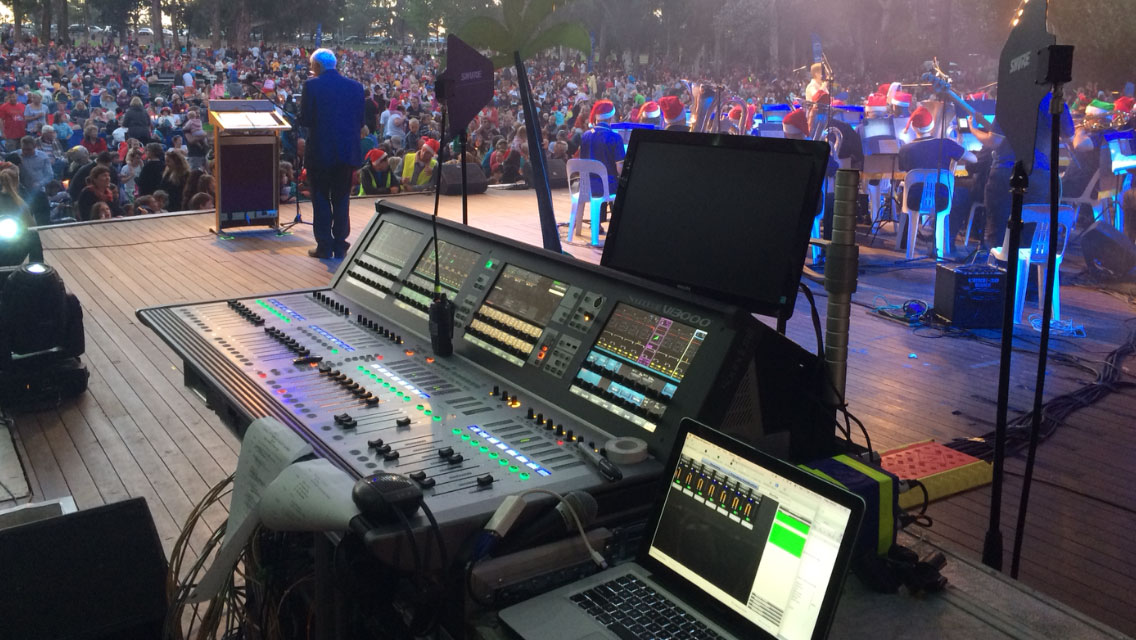 Investing in consoles for an expanding events business is not something that is done lightly. Time needs to be taken to research emerging technologies, in the hopes of ‘future-proofing’ what could be a long and pricey investment. For Chris Neal, Managing Director of Canberra’s Eclipse Lighting and Sound, researching the many options available in today’s market had to be done with a mind to his growing customer base’s needs and the complexity of their gigs.

Chris evaluated both high-end and lower priced models before making a purchase, some he found were lacking the right user interface, other he knew had reliability issues from his experience in other live situations. He said, “Our 64-channel Soundcraft Vi1 was our biggest format desk, but we quickly found out we needed something with a higher channel count and a user interface that allows you to have two operators on the console.”

He finally decided on purchasing two Soundcraft Vi3000 consoles (link), stating that: “The sonic performance of the Vi1 was awesome, which sold me on buying the Vi3000.”

Explaining further, Chris said, “We do a lot of work with the Canberra Symphony Orchestra and a lot of musical theatre. The demands from musical theatre clients have been increasing over the last few years. Radio microphone counts have gone from 16 or 20 channels to 30 or 40 channels, and then you have to put an orchestra on top of that. Being able to get all of that on one console is great,” Chris reported.

The expanding sophistication and complexity of his customer’s shows, led Chris and his team to deploy multiple desks via a Dante network, enabling some nice functionality for the operators.

“We’ve bought two more Soundcraft Si Performers and another Soundcraft Si Expression,” explained Chris. “We use those as well as the Vi3000 on a Dante network run through the theatre. We set one desk up backstage to do radio mic monitoring. We run an in-ear monitor feed from that console and give the operator an iPad. That operator can now run around backstage, stand next to any performer and PFL their radio mic. That’s a powerful tool to make sure that radio mics are working correctly before they go on stage. We’ve also been putting personal mix systems in orchestra pits rather than wedges. We simply place a console in the pit and run Dante to it via a single Cat5.”

The ability to create individual mixes for the different sections of the distributed PAs found in musical theatre and outdoor, was a priority when choosing his console purchase. The Vi3000’s bus and matrix structure made it an attractive choice for Chris.

“You can create any 24 mixes to go to your matrix; a direct out, any patch outs, any patch ins, groups, auxes, or the L/R master. It’s just awesome. On an outdoor concert where I’ve got to add a delay or in–fill, it’s just really easy to get a mix and level control quickly. In musical theatre, we’ll have three or four hundred snapshots in a musical. Once it’s programmed, I can sit down in the front row and adjust a matrix bus to add more orchestra in the front fill without having any issues with automation changing the level in another mix,” he said.

The console’s recall scope allows his customers to make changes then quickly revert back to saved parameters. “I love the automation scope – you can grab anything you want,” explained Chris. “There’s so much flexibility; from channels to bus outs to individual parameters like gain or EQ. I can choose to recall EQ changes on certain cues, or override it for the next 15 cues because the mic is being worn by another performer playing a different character.”

Chris also took advantage of the MADI and Dante connections to fulfill the individual needs of each gig. “I’ve got one console set up with a Mac Mini and an RME MADIface rack mounted underneath it. We come out of the internal MADI port to the MADIface, then USB3 to the Mac Mini. That’s been great for doing recordings and virtual sound checks. Getting radio mic cues and levels in musical theatre absolutely accurate by using a multitrack record is great, especially when you only have the cast for a limited time during rehearsals. On the other console I take a Dante out and the process is the same. I’ve got also got QLab running on the Mac, so I have playback patched in the console as soon as I’ve turned it on. If the client gives me music to play, I put it on USB and simply load it into Qlab. I often trigger playback from QLab via MIDI by using a snapshot.”

The consoles have already been put to work. Last December both Vi3000s were handling FOH and monitoring duties on the Olympic Committee-sanctioned event, the International Children’s Games at Lake Macquarie. Which also meant they weren’t available for Chris to use. “I did production at the Manly Christmas Carols,” he elaborated. “Both Vi3000s were still at Lake Macquarie, but I love the console so much, I hired one!”

For more info on the Vi3000, check: www.soundcraft.com/products/vi3000