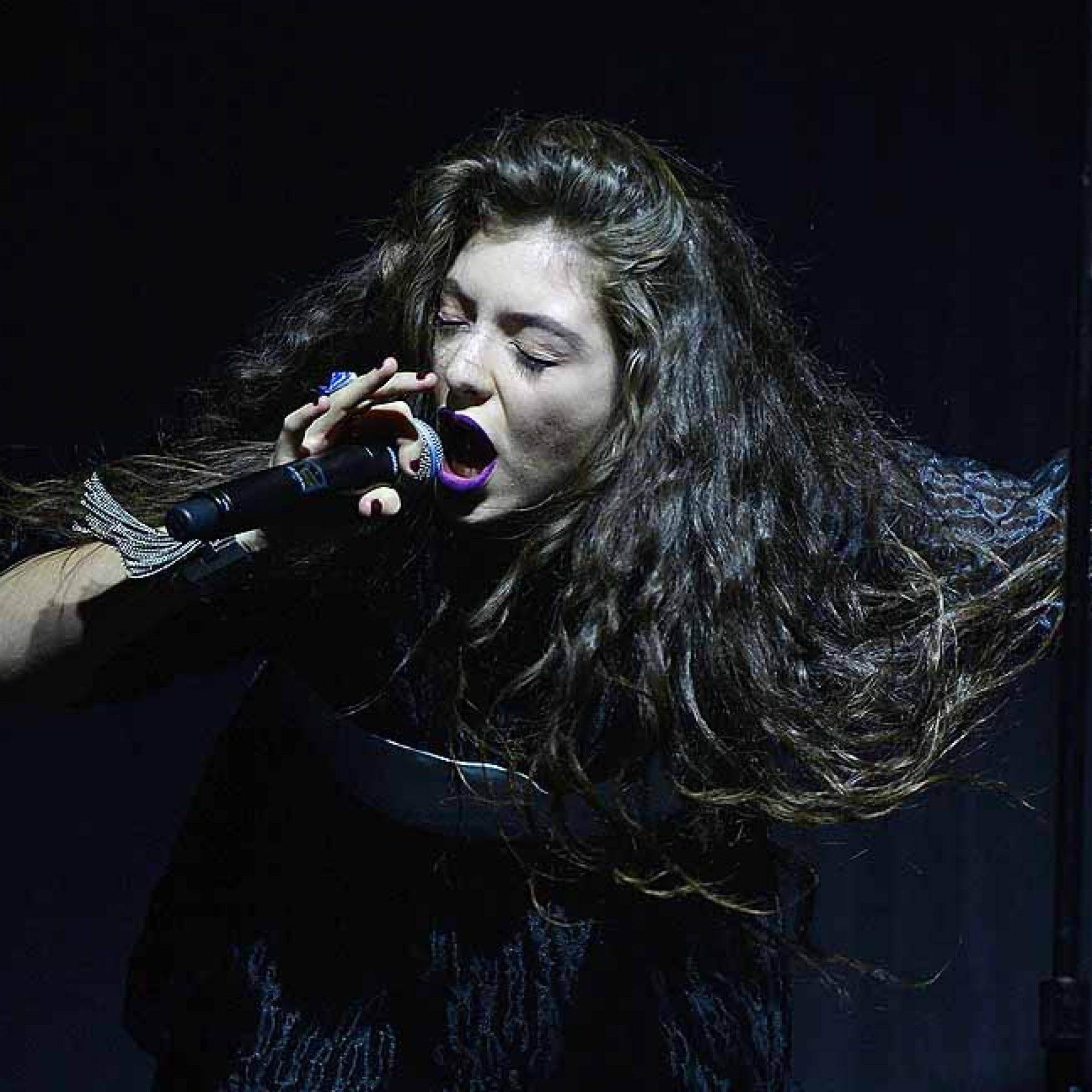 0 SHARE
Read Next: AUSSIE ARTISTS TELL THE TRUTH ABOUT MONEY IN MUSIC

In concert, all eyes are on the star. But it’s not all about Lorde.

Untamed: That’s as best as I can describe Lorde in concert. In an industry where even ‘punk’ rockers have good teeth and a tightly-controlled image, Lorde is disarmingly ‘out of the box’. Her voice is deep. Not necessarily low (although she does have great range), but deep in ‘another dimension’ deep. And her on-stage antics are primal, unrehearsed and mesmerising.

So the trick was not to take this other-worldly creature and put the proverbial ‘backing tape’ behind her.

Lorde’s debut album, Pure Heroine, epitomised by her breakthrough, Grammy-winning hit, Royals, is brooding, spare and electronic. There was never any talk of hitting the road with electric guitars and a brass section. To do the album justice, the live sound would need to be true to the studio production in many ways. But not safe. The sound should be dynamic and exciting. Oh, and the low end should keep those trousers flapping.

“One of the first question I put to Ella [aka Lorde] was what do you want the FOH sound to be? Like a CD? Loud? Dynamic? Or a little more subdued and compressed like the record? She said to me, ‘no, I want it big, loud and dynamic, like a rock band’. So we’ve opened things up and put some more dynamic moments in there between verses and choruses. When the big sounds hit or the bass in the chorus drops, the level difference is dramatic; probably louder, and more dynamic than I normally would venture to go.”

Philip Harvey had recently come off a My Bloody Valentine tour (“It’s been nice to give my ears a break!”) and hand picked by a high-profile, UK-based management team to mix sound. He worked with Ella in the lead up to the tour, and quickly learnt to dispense with any preconceptions about her needs, preferences and vision.

Settling on the best vocal mic was Philip’s first surprise: “She’s using a Shure Beta58. I love the SM58 as a go-to mic but I’ve never been a huge fan of the Beta58. But it suits her voice best.

“Very early on in the piece, after learning she didn’t have a ‘favourite’ mic, I lined up a bunch that had worked for me over the years on various artists. We tried the Telefunken M80, a mic I’ve had great success with; the Sennheiser MD431, another great vocal mic; and the Heil PR35… all brilliant mics. But none of them fit. And during a European promotion run prior to the tour — where we’d do TV and radio spots — Ella would keep wanting to return to the Beta58 and I had to agree; it provides the most open sound for her voice.”

UP FRONT ABOUT BACKING

After settling on the best mic, Ella dropped another bombshell: she doesn’t like her vocal mixed too loud.

“That’s a big part of her approach,” noted Philip Harvey. “She doesn’t want her vocal to sit on top of everything else in the mix. Case in point: the level of the backing vocals. When most people are trying their best to hide the fact they’re using backing tracks for BVs, Ella wants them to be almost as prominent as her own vocal. Her approach is to weave her level in and out of the BVs — she’ll duck her level a bit and let the BVs take over at times and then she’ll project to be over them in other parts. It’s a big part of her sound.”

But not something easily accepted by most engineers more accustomed to pushing the lead vocal right out front.

“Usually it’s the most important thing, right? Ride those vocals high. Especially on radio or TV, where the vocals are normally right up so you can hear it through a three-inch mono speaker. During that promo tour I had to keep asking the broadcast engineer to mix her vocals lower. ‘But it’s too soft!’ ‘Don’t worry she’ll push herself over the mix when she wants to.’

“And it remains Ella’s biggest pet peeve: ‘I’m so disappointed. I listened to the TV program and the vocals were mixed too high.’

“The same thing can happen at festivals where, increasingly, bands are multitracked and an audio guy you’ve never met before will try and get a happening broadcast mix on the fly.”

Ella’s in-ear mix is equally idiosyncratic, according to monitors engineer Brett Taylor (who was deputising for Marcel Cacdac on the Australia leg). “When you think of a lead singer’s mix, often times they want a lot of themselves — ‘more me’. But there will be times in Ella’s mix when her vocals are almost underneath the backing vocal tracks.”

Ella uses Sensaphonic in-ear monitors, as do the other two band members, James Mac (keys) and Ben Barter (drums). James and Ben supplement their ears with a d&b M2 floor monitor each. Minimal.

“We had sidefill in the recent US leg of the tour but we didn’t use it. It was more as a failsafe. So if Ella takes an ear out, she’s really only hearing house sound. And with the reliance on loops and playback, there isn’t even a guitar stack or a bass player she can take cues from. She’s got to have a good seal — no two ways about it.”

For both Philip and Brett, mixing isn’t about flamboyant gestures or frantic cycling through mute groups and snapshots. Mixing is an almost forensic exercise.

“It’s half a dB here or one dB there,” confided Philip. “Let’s not forget, the record is sparse. The confronting thing during production rehearsals and early shows was realising that if an element is too low in the mix then it’s painfully obvious. So the challenge was to take all those elements and pull it into a big, dynamic mix, rather than replicate the CD.”

During the show, Philip will keep half an eye on his MacBook which hosts Metric Halo’s real-time analyser, Spectrafoo. He knows the areas where low and low-mid buildup can occur and keeps a watchful eye.

Ah, yes, the low end. Anyone who’s heard any of Lorde’s hits will be familiar with the album’s enormous bottom end, thanks to Joel Little’s production. The live show was always going to have that hip-hop sensibility to the low end. In reality, it’s far more palatable than some of the overbearing sub flabbiness you’ll often hear at a hip hop gig. It’s tight. Credit must go to JPJ’s system set up, to Joel Little’s fastidious preparation of the samples, loops and sounds for the tour, and to Philip Harvey’s careful treatment of the low end in the mix.

Harvey: “Joel Little painstakingly took the album’s samples and stems, and worked with the keyboard player James to load them into an Ableton Live project to be recreated in concert. Those sounds from Live come to me via two UA Apollo 16 interfaces and two Radial rackmount DIs. The Apollo sounds great. And Joel’s sounds are amazing to begin with.

“Probably my only ‘secret weapon’ in opening up the lows is to feed the subs from an auxiliary send. The likes of the acoustic kick, floor tom, and the various stereo drum loops and bass drops will get fed to that aux send.

On the night, the pitch was just right. Festival Hall in Melbourne, as well known as a boxing venue as a concert venue, responded well to JPJ’s JBL Vertec PA. Big, dynamic and exciting.

Lorde’s vocal chain starts with a wireless Shure Beta58 handheld. The sensitivity of the mic and transmitter are all set to zero. From the Avid stage rack it gets to Philip Harvey at FOH, who runs into a Waves C6 plug-in. Philip sets the C6’s two floating bands to squeeze some low mids (around 155Hz) when Ella is really projecting. The other band is de-essing at around 8.5kHz. After that, the vocal gets an overall tightening with a Waves API 2500 compressor plug-in.

Keyboardist James Mac auditioned for the tour with unusual results: “I actually auditioned to be the drummer. I didn’t get the gig, but management wondered if I’d be interested in keys. I’m a drummer. So I said ‘sure’. I didn’t know anything much about Ableton Live, and hadn’t played keys before, but I did a crash course. I now know… don’t play the black notes, bad things happen!

James is being modest. The keyboard role is more about triggering sounds and loops than occupying a traditional performance role. So rhythm is more important than being able to duel with Stevie Wonder.

“The rig is based on two MacBook Pros running Ableton Live. I’ve got two identical Novation 61-key Impulses that control what’s mostly samples and loops prepared by Joel Little for the tour. The pads on the Impulse are triggering vocal samples, sirens, etc, while the keys are sometimes playing drum racks on Ableton, or soft synths from the Arturia synth pack, or NI Massive. As you’d expect, it’s all automated, so when the chorus drops, for example, the program change hits and the chorus sounds will click in. I have a third mini keyboard up there that we use for loops during the occasional break between songs. The keyboards go through a MIDI merge and into both laptops — an A and a B system for redundancy’s sake. The audio is processed through the UA Apollo interfaces.” 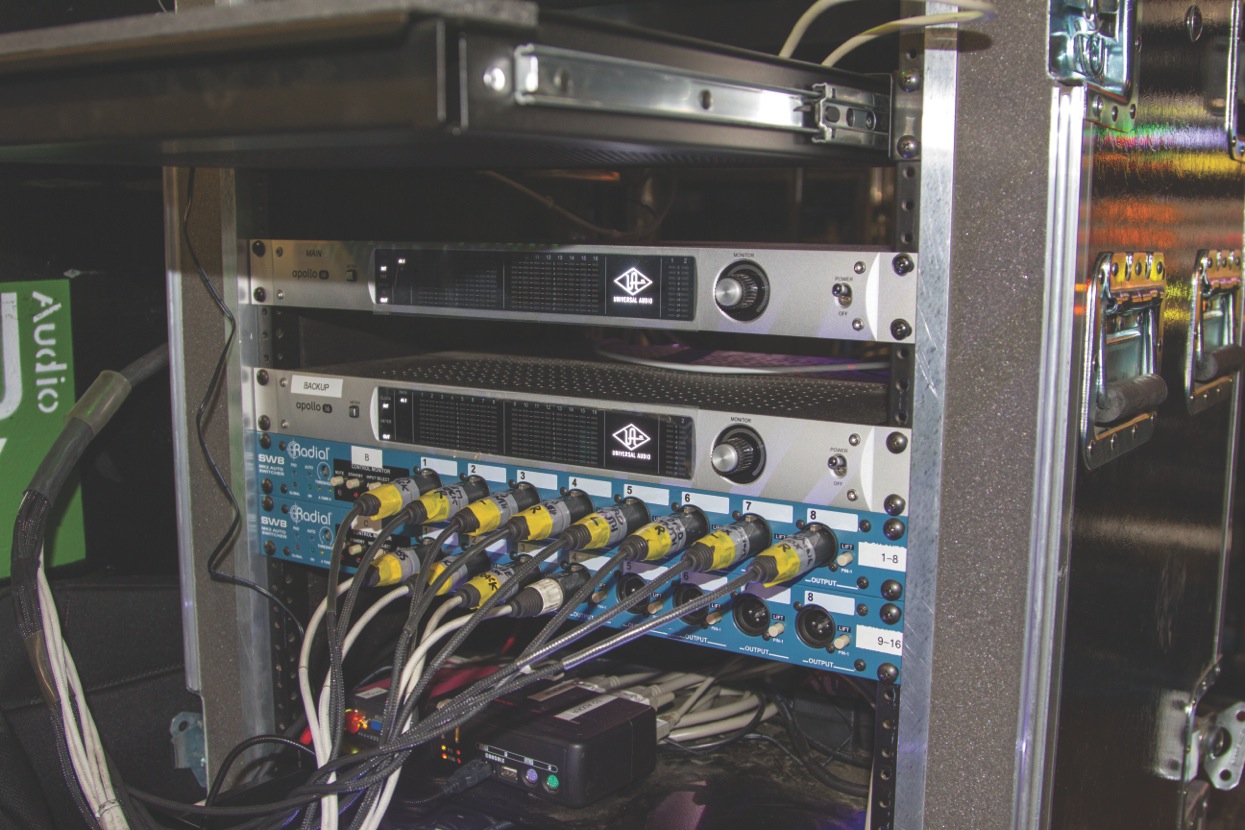