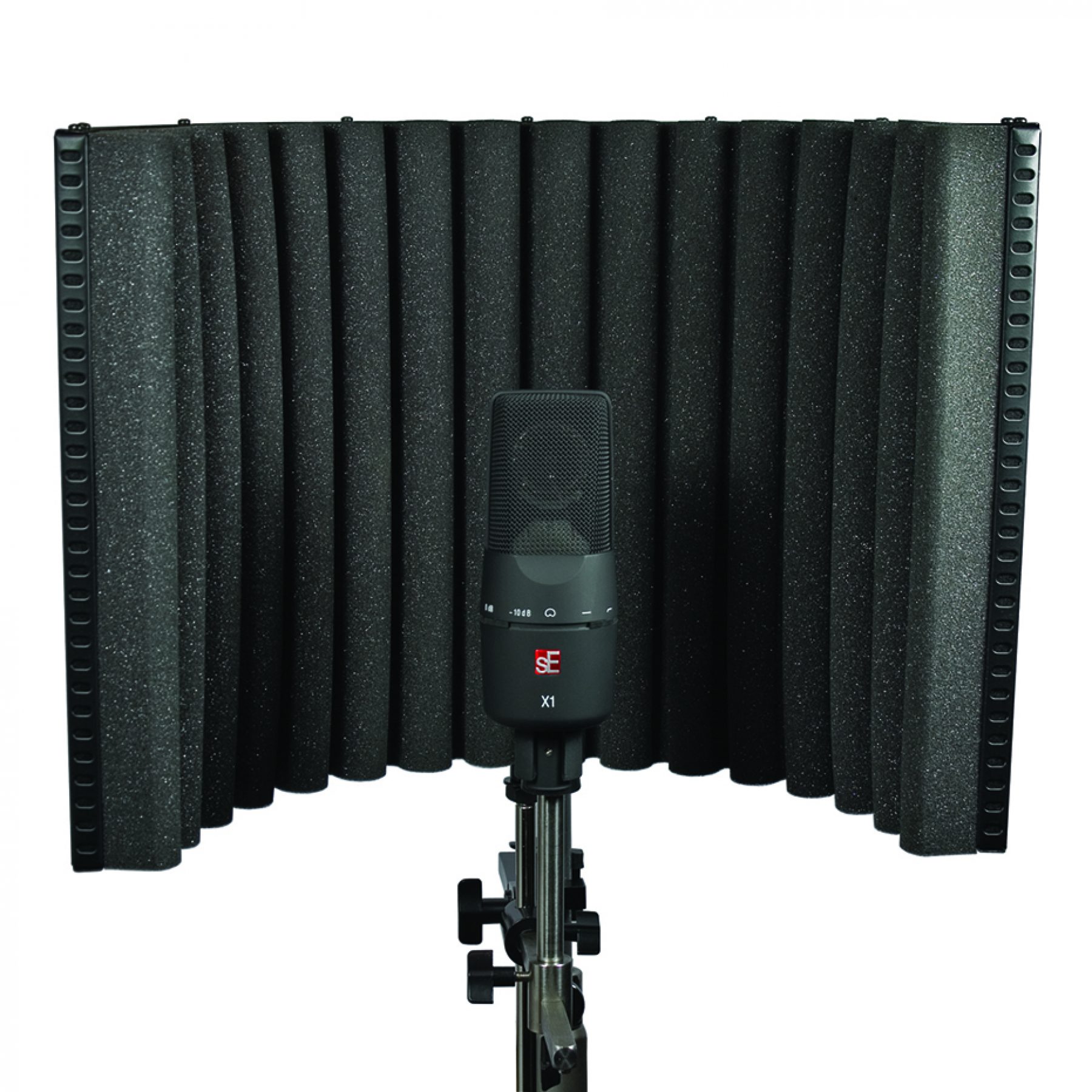 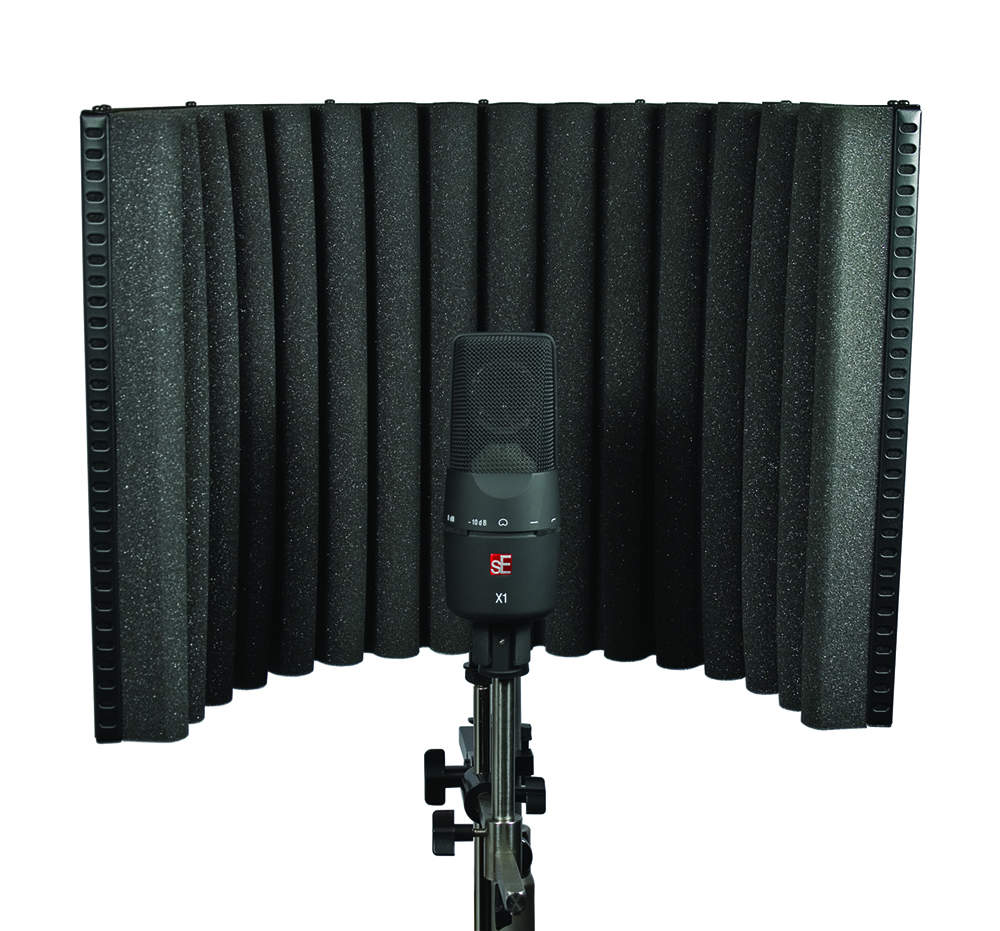 When they’re bundled together, do the X1 and RF make good bedfellows?

sE Electronics hails from Shanghai, China, where it produces a range of microphones and accessories. Not content with simply reproducing established designs, sE has recently come up with some innovative ideas [see the sE Gemini III review last issue, and the RNR1 ribbon review back in Issue 68], with a range of microphones that encompass both budget and more exotic ends of the market. In recent times we’ve been blessed with cheap and increasingly well-made audio imports, of which sE Electronics has been a successful player. It’s easy to forget it wasn’t so long ago that the level of choice and quality available was markedly different. ‘Budget’ had a different meaning back then… so is this ‘budget’ bundle from sE any good?
The sE X1 Project Studio Reflexion Filter Bundle unites a large diaphragm condenser microphone and Reflexion Filter as a pair. Inside the box you’ll find the X1, sE’s entry-level large diaphragm microphone, and the Project Studio Reflexion Filter (RF), which is the little sister of the successful RF Pro.

The specifications of the X1 are good, even though it’s a budget microphone. The 16dB (A-weighted) equivalent noise level and maximum SPL of 125dB means it’s quiet enough and dynamic enough for a variety of applications from vocals and guitars to percussion.
Switches on the microphone include a –10dB pad and a low shelving filter set amongst a pleasant rubberised black finish that covers the microphone’s exterior. Being a condenser, the X1 runs on 48V phantom power, which feeds the transformerless FET electronics from an XLR cable. Perched on top of all this is the hand-made diaphragm, protected from harm by a black metal grille.
Sadly, there’s no suspension mount supplied in the package, although one is available separately. Arguably suspension mounts are an essential part of any good mic setup because they act to reduce transference of low frequencies through the microphone stand. In use, when I tightened up the X1’s microphone clip it sheared the thread ring, effectively making the clip useless, reinforcing the idea that a suspension mount would have been a better option, even if it marginally increased the cost.
Sonically, the sE X1 is quite neutral in the mid to low end, with its on-axis specs portraying a flat frequency response between 20Hz and 2kHz. Above this, however, the response curve rises to a 3.5dB peak at around 12kHz. Consequently the mic sounds bright; too bright for some vocals, although this ‘air’ certainly helps bring clarity to dull sources like double bass and nylon acoustic guitar. With any microphone purchase specifically intended for vocals, particularly if that voice is your own, it’s always essential to listen to it first to see if the mic suits.
Using the X1 for backing vocals in a room from about two metres away failed to impress. With distance, the brightness of the microphone sounded more unbalanced and the overall character was thin and unflattering. Conversely, up close on the same male vocal and taking advantage of proximity effect, the mic performed well, adding cut to his sound, effectively helping to bring his voice forward in the mix.

The real asset in this bundle is the Reflexion Filter. Given the vast majority of interiors we record in are less than complimentary, control over how much acoustic reflection makes it into your microphone is a powerful asset. The filter works to not only reduce the amount of ambient reflections being captured by the microphone, it also absorbs sound from the source, reducing those frequencies that would otherwise return to the microphone as reflected sound.
Anyone who’s ever recorded and tried to dampen or treat the acoustics of a room because it sounds Simply Horrible In Tone (you figure out the acronym) knows that it’s no easy task. I’ve used blankets, doonas, pillows and foam, either draped, wedged or taped to microphone or music stands, walls, doors, ceilings and anything else. Using sE’s Reflexion Filter doesn’t make improvised dampening obsolete, but it certainly makes controlling the great majority of unwanted reflections easy. Choosing how much or little of the acoustic environment you want in your recording simply involves moving the microphone forwards or backwards into the concave embrace of the filter… fantastic.
The filter is constructed from acoustic foam set on a concave, perforated metal backing. The mount itself is designed to grip the top of a microphone stand with the filter and microphone sitting in front of the thread where you’d normally fix your microphone. This can make the setup a little front heavy and you need to be careful to get the right balance. There are other ways to go about it of course, and mounting the filter and microphone on separate stands is a good alternative approach. Placing the filter above a sound source to stop reflections from a low ceiling also worked well. Above a kick drum mic it warded off cymbal spill, and in a live recording situation, mounting it low to the ground behind a guitar cabinet microphone worked a treat. Suffice to say the filter’s potential uses are vast.
What’s not to like? The Reflexion Filter doesn’t run on batteries, it’s a good portable size, it’s well made and, provided you look after it, it should be around to filter high frequencies longer than you’ll be able to hear them!

The sE X1 is a fine microphone for those starting out or challenged by budget and the Reflexion Filter in particular is a real winner. Whether your budget is large or small, and whether you’re recording in your bedroom or a million dollar facility, the Reflexion Filter can dramatically influence the sound of your recording.