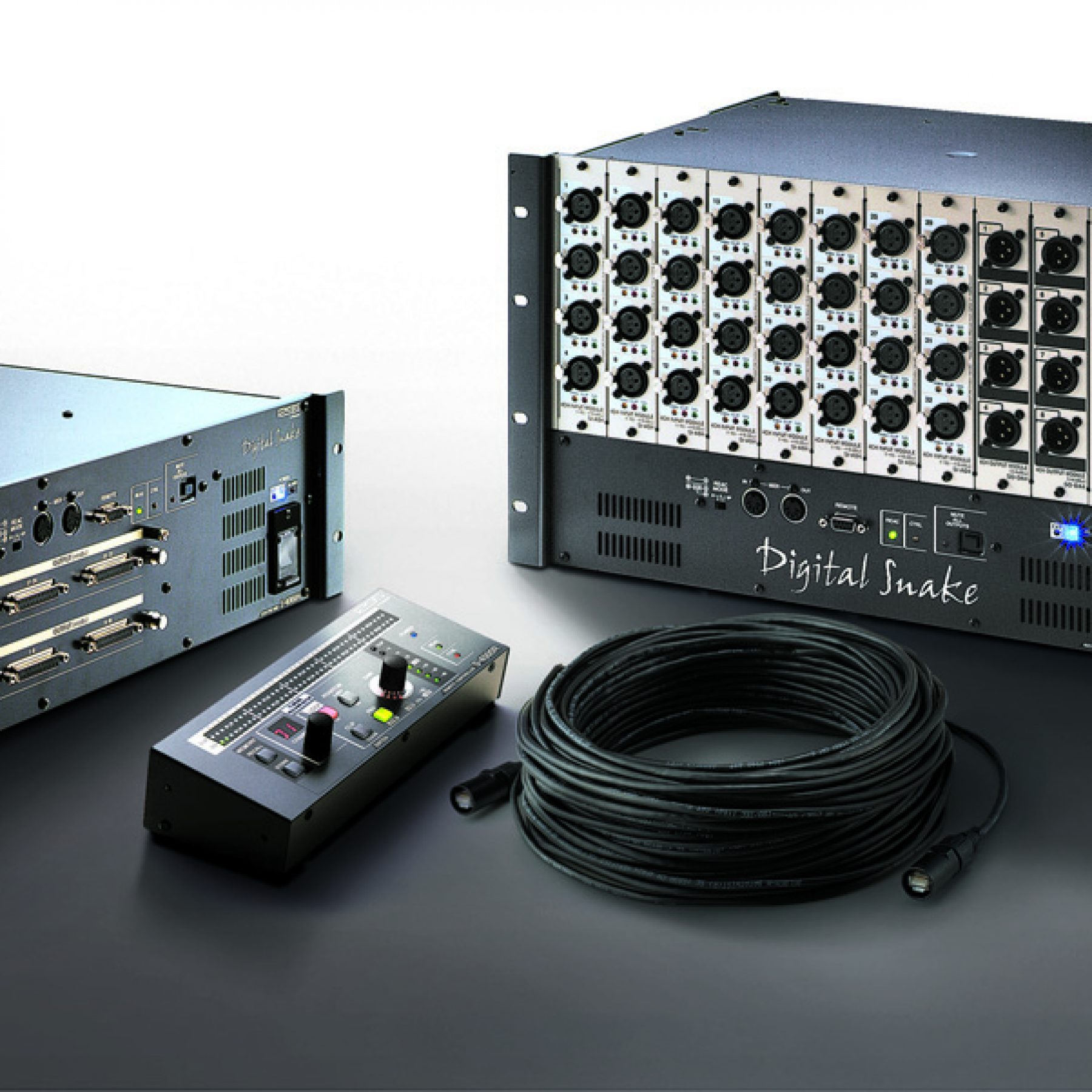 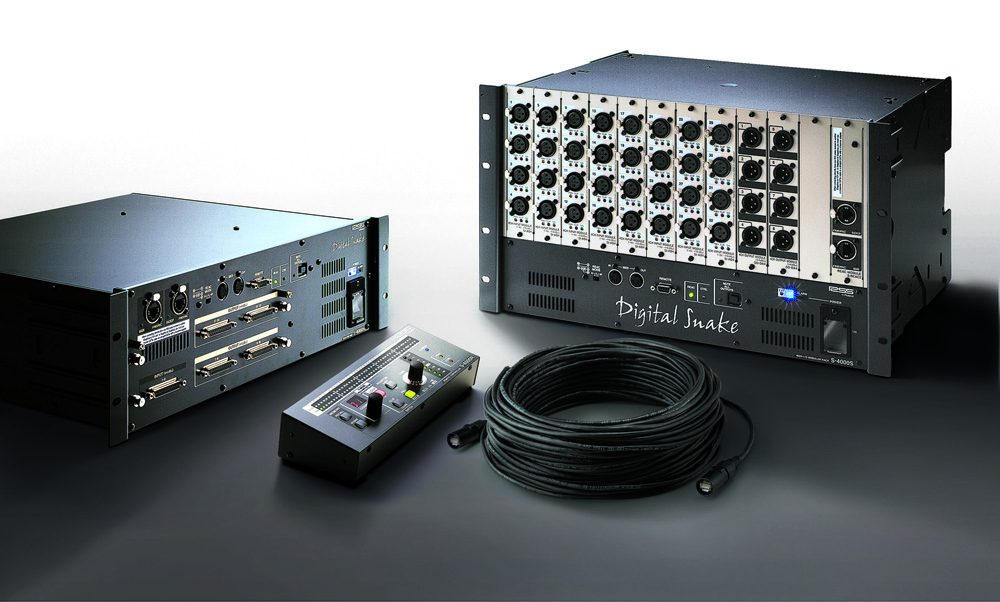 Companies like Aviom have popularised the use of Ethernet audio transmission in the live sound arena. Roland takes the next leap forward with this comprehensive pro system.

I like to try new technologies so when I was asked to give this digital snake system a go, I said ‘sure, why not?’. I’ve been an audio crash test dummy for a long time. I was probably the first to adopt PZM microphones back when Ken Wahrenbrock had just invented them in his garage in Downey, California (before he sold the patent to Crown), and a few years back I was the first to use Yamaha’s flagship PM1D professionally. I have lived through the digital revolution and have only a few scars to show for it. So, I fondly remember the first new Roland kit I put into service and, as it happens, it was one of the last analogue devices Roland produced – an RE-201 Space Echo. Just plug it in and… wow! Those were some effects. But that was some time ago and, in the ensuing decades, Roland has concentrated its efforts in the world of digital… and it shows in the Digital Snake system.

How many of you out there hate to read manuals? My guess is that nearly all of us find owner’s manuals so boring (like a self-induced coma), or badly written/translated (‘is this really English or have they decided to boycott all functional prepositions?’), or so thick, in the smallest type, you start to despair. So, true to my undying abhorrence for manuals, I unpacked the S-4000S 40-channel I/O modular rack, the S-4000H 32×8 FOH unit and the S-4000R remote-control unit, put the manual to one side, had a quick look, plugged them in, cabled them up and, hey presto, the system came to life and passed clean, clear audio. The remote-control unit was self explanatory and simple to use. Success.

So let’s look at the components of the system.

The S-4000S is, as it were, the stage box or stage facilities panel. So this is where I would plug satellite multicores, additional stage boxes or microphones and DIs direct into the XLR inputs. There are also return lines from the slave S-4000H. The front has all the usual connectors – 32 female input XLRs (in eight modules of four each), eight male output XLRs (in two modules of four each). There are the Main and Backup standard RJ45 ports using sturdy Neutrik ‘EtherCons’ in the REAC (Roland Ethernet Audio Communication) module. Here you connect two Ethernet cables (one Main, one Backup), either Crossover cables for direct communication with the S-4000H unit or connect via straight-through Ethernet cables to dual Ethernet Switching Hubs to use as a split system for sending broadcast feeds, to a multitrack recorder or a monitor board; or with enough S-4000Hs to all three. Cat 5e Ethernet cable is recommended. Below the XLRs is the REAC mode switch with M (Master), S (Slave) and SP (Split) settings. To the left are the Midi In and Out connectors. Then a D-sub nine-pin labelled ‘Remote’, REAC and Control LEDs, and a ‘Mute All Outputs’ button and the power switch with a protective door. The back of the unit is fitted with an IEC jack with cord restraint for mains voltage and a Neutrik PowerCon for use with the optional S-240P external power supply and some cooling fans. This all seemed straightforward – nothing too alarming. Back to the business end, on the front, each of four balanced XLRs contained within the one of the eight SIAD4 input modules is equipped with a variable gain preamp, a 24-bit/96k A/D converter, 48V phantom power and a pad. The eight male XLRs are housed in two SO-DA4 modules and are running eight corresponding 24-bit/96k D/A converters. The rep from Roland told me that the ‘benchmark for the mic pre design was Focusrite’ and it’s very classy – accepting signal levels from -65 to +10dBu, with bucket-loads of headroom at +28dBu. More on variable gain later.

The S-4000H is the jack-of-all-trades box. It can be put into service anywhere you need audio: put it next to the FOH console and patch according to the event’s needs; it can be used as a unit to split audio to any destination that’s called for… there are too many possibilities to mention, but anywhere you might need to split audio off to, you can. The front panel has many of the same connectors and features as the S-4000S: Main and Backup EtherCons, REAC mode switch, Midi I/O, LED indicators and the Mute All ‘panic button’. Additionally, there are five female DB-25 connectors – four labelled as Outputs 1-8, 9-16, 17-24 and 25-32 – and these carry audio from the S-4000S inputs. Breakouts to XLRs are provided by the SC-A0805DM cables. The remaining DB-25 is labelled Input 1-8, and can be used to send audio to the S-4000S. The SC-A0805DF breakout cable makes these available as XLRs. The power-on switch is also located on this panel. The back panel houses the IEC and PowerCon connectors.

This is the remote control unit. Via a RS-232C cable I could control +48V on/off per channel, the 20dB pad and the preamp gain control that gives a range of -45 to +10 without pad, –65 to –10 with pad. In addition, 10 memory presets can be stored and recalled with this unit. Signal and clip indicators are lined up across the top. There is a handy channel settings lock-out button and a ‘clip clear’ button. That’s it; a simple, easy-to-use interface. I did download the Roland S-4000 Remote Control Software for PC. This actually looked even friendlier, as I could see all settings at the same time. I didn’t have a chance to use the software, but in future, this would be my preferred option.

The first and most obvious configuration is the simple 32×8 system. Basically, it provides 40 tie-lines from point A to point B. Secondly, is the 32×8 system with a 32-channel split for a live PA monitor board, recording device, broadcast feed, etc. The third is a 64×16 system, which utilises two S-4000S and two S-4000H units. This type of expansion is only limited to four of each unit, giving a total I/O capability of 128×32. When used as a split system, the need for the Ethernet switching hubs arises. These must be of high spec and have full duplex capability. In addition to the hubs, different Ethernet cables are required – crossover Ethernet cables for simple direct connection, and straight-through Ethernet cables when the switching hubs are in line.

This system sounds fantastic. Roland has really done its homework on the audio side of things. Ease-of-use is high on the agenda, with simple and effective remote interfacing, clear and concise labelling, and familiar connectors. If you want to use the snake in the split configuration, yes, you can use ordinary hubs, but this leaves you with basic RJ-45 connectors on stage, which is scary. Thankfully, Roland does make a dedicated hub for the system called the S-4000HUB with EtherCon connections, which you would be well advised to take advantage of. However, if you need to switch configurations regularly, two different types of CAT5e cables are needed. If I was touring, or in OB, with my cables taking a hammering in whatever the nasty environment I might find myself in, I wouldn’t want spares for two types of cable. Roland could think about incorporating the hub into the S-400S, and put a switch in to convert crossover to straight-through Ethernet (or simply incorporate that switch into the 4000HUB perhaps). Then I could use a single standard of cable, and the more hardy connectors.

There’s a lot to like about the Digital Snake. It represents a drop-in solution for any setup, regardless of the console (new, old, digital or analogue). Roland obviously doesn’t have the richest live sound pedigree going, and sound reinforcement people are notoriously suspicious of newcomers, but all indications would suggest it’s taking the Digital Snake seriously, devoting separate manpower and resources to it – so don’t panic, you won’t be talking to the ‘groove box’ help desk when you phone for tech advice.

For the guys in the theatre market or in charge of club/pub/church sound systems (who haven’t been exposed to pricier digital consoles with their own digital audio transmission) many aspects of the Digital Snake will be a revelation. Foremost would probably be how silent it is – there are no induced hums or buzzes; and the signal integrity – no frequency roll-off over long cable runs. And splitting signals – traditionally a pretty expensive and involved exercise – is now as simple as introducing an Ethernet hub. I won’t say the Digital Snake is perfect (I found the fans a bit noisy – but I’m assured that mine is suffering from some early production run glitch) but there was nothing that had me scratching my head in frustration. I’d urge anyone with an aging multicore (and a budget to replace it) to investigate.