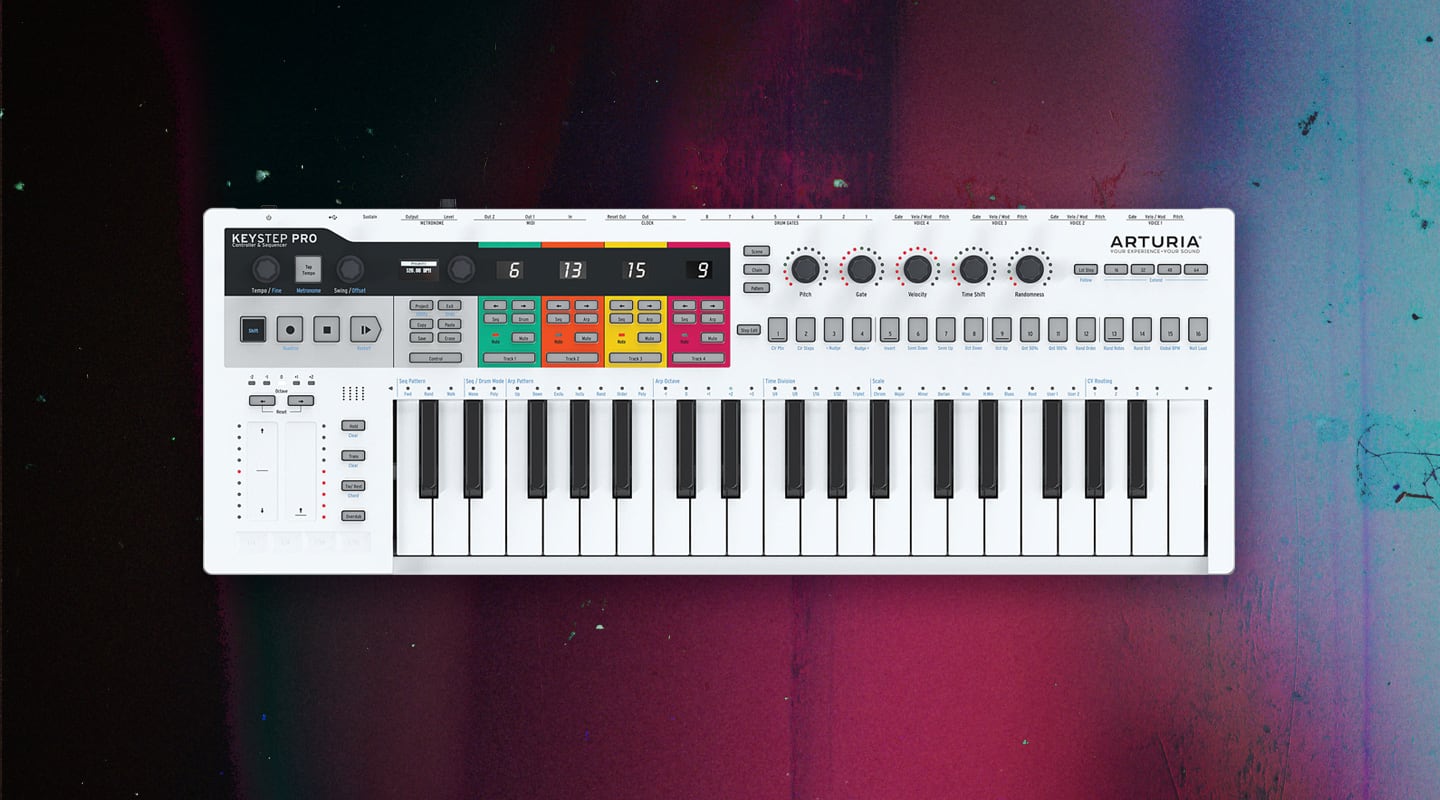 This thing lay dormant in the back of the cupboard for 20-odd years. I didn’t even think it still worked. The Syntecno TeeBee is a Dutch curio from the mid/late ’90s. These were the days when boutique synth workshops were attempting to slavishly recreate the sound of the Roland TB303. Novation’s BassStation won the war, ironically by not really sounding like a 303 at all.

Syntecno’s offering arguably got closer than anyone (if you don’t count Propellerhead’s software triumph). The knobs are chunky and primed for acid house tweaking.

I’ll be honest, I struggled to extract anything resembling A Guy Called Gerald bass line from the TeeBee. I blame the piano roll editor of Cubase 3.1 on the Atari. Then it got all flakey. Then I parked it as a fetching rack spacer. Then I packed up my outboard synths and moved all my production into the box. Then I sold my functioning synths. And effectively the Syntecno TeeBee has sat in stasis for 20 years. Until now.

KeyStep Pro is a powerhouse little four-track sequencer, arpeggiator and controller keyboard. If you’re a modular synth afienado then you’ve probably already ordered one. I can’t think of a better way of unlocking the musical potential of your Eurorack curios (or similar). But if you have no idea what the CV/gate jacks are for, on the back of the KeyStep Pro, fear not. If you own any external synths, then KeyStep Pro provides a very neat way to switch between sources, jam and develop loops and sequences.

But let’s get back to the more pressing matter of my Syntecno TeeBee monosynth.

Turns out the KeyStep Pro spits out an APB Midi spray upon startup. And it was at that moment I heard a split second spasm from the TeeBee. Like SETI scientists picking up some alien Morse code, I was transfixed. It’s alive! Well, one oscillator was alive, the saw and square wave is dead but the ring mod source is functioning.

To cut short a touching (yet lengthy) story of a man’s reunion with his trusty monosynth, I not only had the TeeBee talking but the KeyStep Pro is precisely the right device to get it belching, farting, and squealing like a genuine, honest-to-goodness wannabe TB303.

The KeyStep Pro’s step sequencer is a real eye opener, in the same way a traditional step sequencer is a vein opener. By which I mean, if you’ve ever tried to use the sequencer on an old TB303 (or similar) you know that it’s beyond tedious. In fact, the old step sequencer was a big reason for the random 303 lines of the acid house era — no one really knew what they were doing, but with enough experimentation (and drugs) you could accidentally alight on a floor-filling, squelch-a-licious loop.

Not so the KeyStep Pro, where you actually feel in control of the result. My personal favourite method of working with the KeyStep Pro step sequencer is to experiment by playing live into the sequencer (there’s even a metronome) and then using the Step Edit mode and the five parameter pots to tweak the loop after the fact. It’s a very neat and quick way of achieving nice results.

The KeyStep Pro has four independent tracks. The first is for some manner of drum machine. You can program as many 24 different drum sounds into a loop.

The other three tracks have a Sequencer and a Arpeggiator mode. In other words, you have three independent arpeggiators at your disposal. Mwoah-ha-ha-ha.

The arpeggiator features are all present and correct. But there’s a Chord feature you may never figure out without reading the manual.

Activate the Chord function; tap in multiple notes; then the arp uses that polyphonic grouping as you play any note on the keyboard. It’s slightly mysterious what’s going but, wow, it sounds good — the results are always unexpected and often awesome.

I don’t know how many people are actually performing live with sync’ed hardware synths, triggering loops and beats on the fly. It’s a real high-wire act without a net. But if I ever had to — ‘we’ve got your wife ’n’ kids; if you ever want to see them again, you need to play live with hardware synths and no computer’ — it would most certainly be with a KeyStep Pro.

The ability to address and sequence four independent instruments, and the easy song-building architecture, plus the live performance aspects and control are formidable.

Fortunately, international terrorists aren’t currently stalking my family and I get to stay in the safety of my home, where I can more than happily use KeyStep Pro to audition sounds, sequences and ideas more quickly than I have ever before. When something sticks, I can record the results to my DAW.

Actually, now that I think of it, if international terrorists did come after my family, I may consider some kinda partial hostage swap in order to be allowed to use my DAW and the KeyStep Pro in the live setting. With the two systems sync’ed, I can now use the KeyStep Pro to extract all the life and variation from my hardware synths in real time, underpinned by the comparative safety of the DAW carrying the bulk of arrangement.

Unless, of course, the terrorists kidnapped my Syntecno TeeBee, recognising it was an adopted member of my family. That would be distressing.