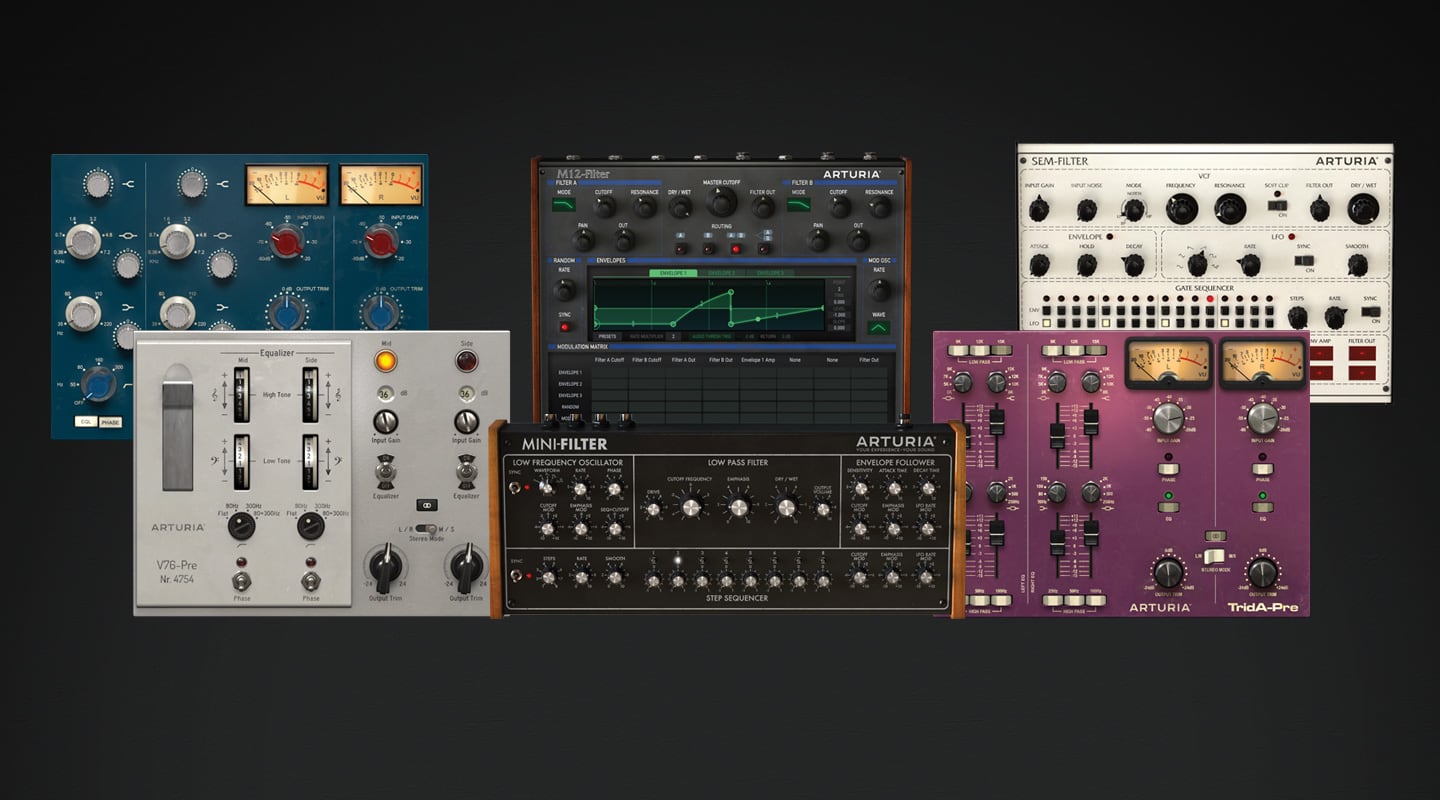 Arturia calls these ‘filters and pres you’ll actually use’. They’re not wrong. 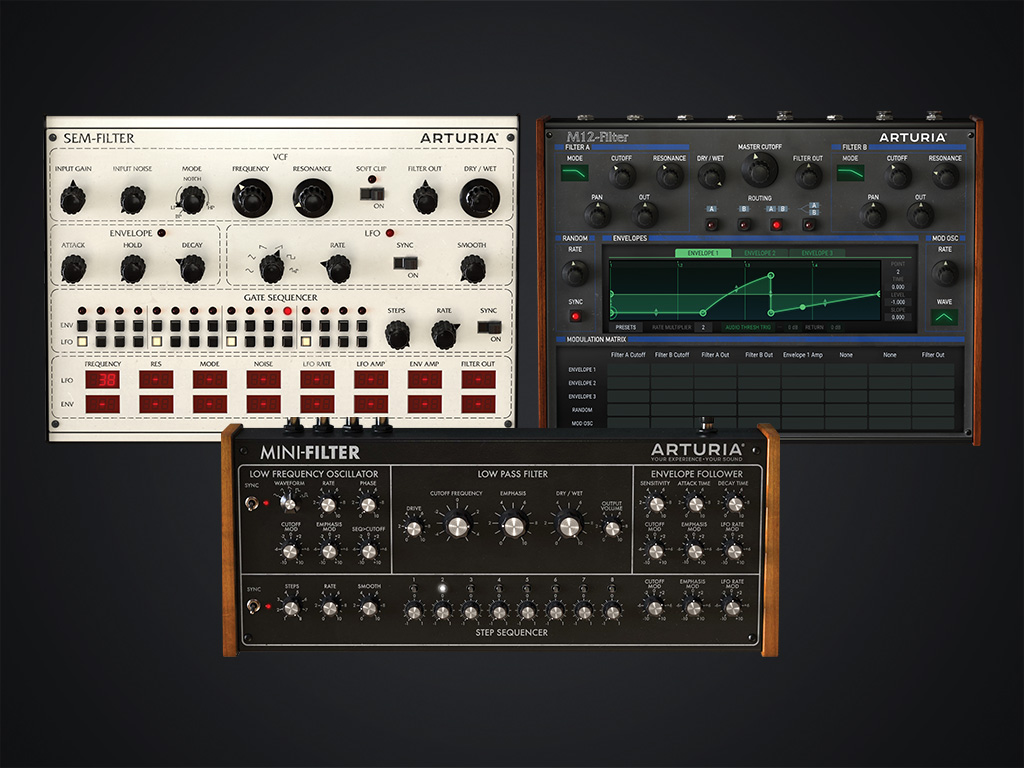 To the recording engineer, EQ filters are a way of carving out space in a mix. To the FOH engineer, high pass filters buy headroom in the sub sends. But to the electronic music producer, filters are practically instruments.

Arturia’s new trio of filter plug-ins are derived from classic analogue synths. In typical Arturia style, every ounce of possible musicality and manipulation is squeezed from each one. No matter what kind of music you produce, these filters are creative tools you need to have in your arsenal.

Oberheim’s SEM (Synthesizer Expander Module) was always meant as a modular synth add-on, so a filter spin-off is right in the SEM wheelhouse. It’s impossible to make this filter sound bad, the first spin of the cutoff knob gave a buttery gentle rolloff. The Mode knob lets you slide anywhere from an LPF to a Notch filter to a HPF. Or go all the way left to get to a bandpass filter.

More than just a nice sounding rolloff, the 16-step sequencer syncs to the tempo of your session and lets you drop in points to modulate the filter’s envelope and LFO. It turns the SEM filter into an instrument in its own right. It’s like a set of cookie cutters where your source material is the dough. Set trigger points in the sequencer to initiate the envelope then make it play with the LFO to create complex sonic movements.

Moog’s ladder filter is among the most recognisable. Arturia’s recreation from the Minimoog is spot on, it’s pleasant with a touch of bite but the real magic lies in that Drive knob which can take you from subtle undergirding warmth to a seriously thick crunch. Couple that with an edgy resonance spike and you’ve got a very characterful filter sound that’s perfect for a lot more than just synths — try your drums bus, for example.

If you wanna get crazy, engage the eight-step sequencer. The premise is the same as the SEM Filter — modulate the cutoff frequency — but the approach is different in that each step has a knob instead of a switch, so you can set how much each step is affected by the LFO or envelope section. You can modulate resonance too (Emphasis knob). The Envelope Follower is another modulation option which affects the cutoff frequency dependent on the level of incoming audio. Great for synth drum loops and transient-heavy material.

The M12 is the Big Daddy of Arturia’s filter trio, taken from the legendary Oberheim Matrix 12. It looks like a retro computer and its functionality isn’t far off. There are two filters here, A and B, each of which has a choice of 15 modes (!), a cutoff, resonance, pan and output knob. The central Master Cutoff knob affects both and you can route the two filters four ways.

Envelopes can be drawn in by hand, too. There are three of them and you can select preset shapes or put in break points on the graph yourself. The grid underneath allows you to assign each envelope to the parameter you want it to control. If you don’t want to get so intricate, the modulation oscillator lets you control a parameter with a selection of five waveshapes. It would be nice if this had a tempo sync option. 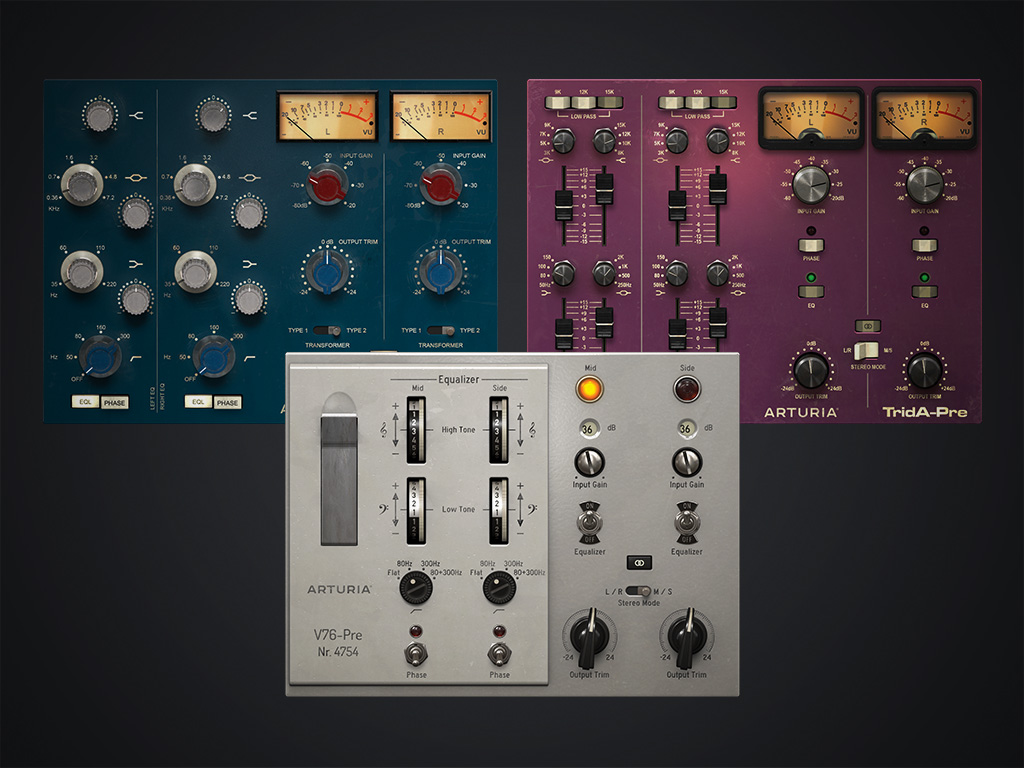 There’s a certain appeal in running ‘cold’ and ‘sterile’ DAW tracks through bits of analogue gear to ‘warm them up’. The next best thing — when taking tracks on a physical trip out of and back into the digital domain is impractical — is to throw a harmonics-inducing plug-in across those tracks. Arturia’s trio of preamp emulations mimic three classic channel strips and does a wonderful job curing your digital woes with analogue mojo.

All three plug-ins have a few things in common, the first of which is a pair of VU meters to get you thinking and seeing analogue. The plug-in’s DNA is really showcased through its breakup characteristics. An Input Gain knob lets you drive the preamp stage from subtle warmth to the border of mayhem, while an Output knob keeps your levels in check. A minimal equaliser section models the original hardware. Then as a beneficial value-add, all three plugs let you process stereo tracks either L/R or M/S (the latter of which turns the equaliser, input gain, and output controls to middle and side, respectively). Better yet, they’re all relatively low on CPU usage.

Who isn’t up for another Neve 1073 emulation in their plug-in menu? Before getting to the EQ, the preamp itself is instantly impressive with its two transformer options. Try increasing the Input Gain to add some magic. 1073-Pre does beautiful things on a drum bus or vocal, particularly in the lows, while subtly adding presence and compression to glue tracks together and make them pop.

The EQ section has a high and low shelf, a continuously sweepable mid band (as opposed to the hardware which is stepped), and a four-position high pass filter. Small tweaks are very perceptible and perfect for adding a touch of flavour to a mix or individual track. Unlike many other EQs, I like that you can turn down the high shelf without a track getting muddy or losing focus. It’s a safe bet that this plug will make any well-recorded track sound better.

Not that looks should matter but the purple GUI of Arturia’s Trident Audio A Range preamp clone is exquisite. The tone is bold and works wonders on vocals. The four-band EQ is presented via faders, with high and low shelves and two mid curves. High-pass and low-pass filters are engaged with push buttons set at different frequencies. The curves feel gentle and musical and I especially liked the meaty sound of the low shelf which kept its clarity when boosted.

The break-up of the TridA-Pre has a real sense of analogue hardware. Try pushing the preamp gain all the way up on a bass guitar for a buzzy edge. Like the other two preamp plugs, this too has M/S processing which gives you a fresh way of mixing the stereo spread on drum overheads, a BVs bus, stereo keyboard, even over the whole mix.

The V76-Pre is by far the most old-school looking plug-in of the bunch, thanks to the ‘I need a screwdriver’ Input Gain knobs and sunken vertical EQ dials. The Telefunken tube preamp emulation adds a pleasant low-mid warmth to synths and other harmonically rich instruments. It gets proper gnarly when pushed.

The two-band high and low shelves (marked by bass and treble clefs) are about the most inoffensive and musical an EQ can get. A treble boost on acoustic guitar opened up a lovely airiness that wasn’t harsh in the slightest. And while the bass curve doesn’t punch like the TridA-Pre’s equivalent, it still adds fullness and weight in a transparent fashion. Filter points are at 80Hz and 300Hz, or click the dial one step further to 80Hz+300Hz and combine the two.