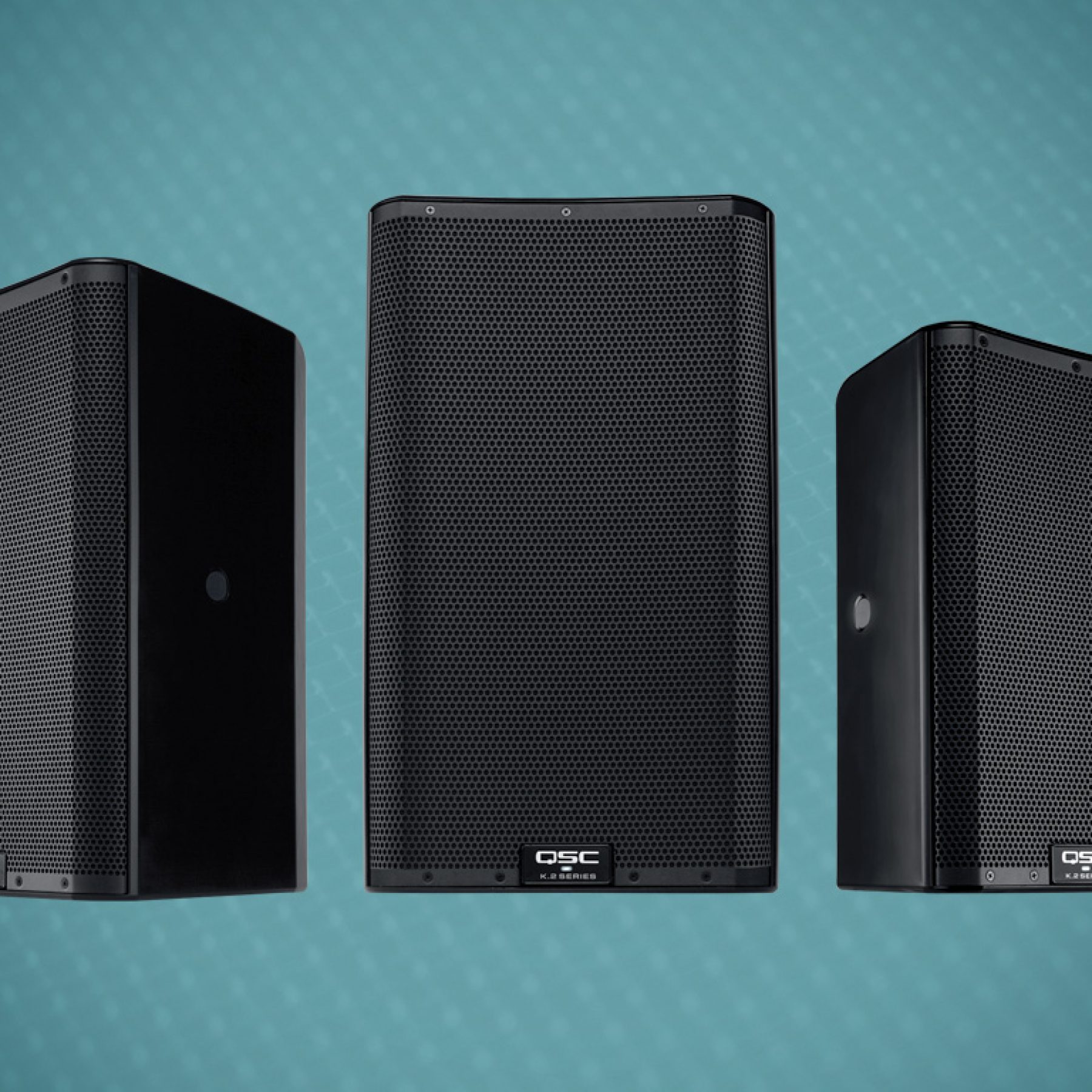 First released in 2009, the original QSC K10 set the standard for portable powered speakers. It was already a crowded market but the K10 caught everybody’s ear by providing more coherent sound for the buck. The design was great; plenty of power, easy to use, the best carry bags, indestructible, well-priced, good looking, handles in the right places and multiple, flexible, mixable inputs… still, it was mainly the sound quality that got them in. I saw the enthusiasm spread through solo performers, folkies and duos, the acts that plug in acoustic instruments and sing for their supper. They loved the accurate reproduction, the compact design and the surprisingly high volume, if required. The word spread fast and the reputation for hi-fidelity combined with ready power saw them move swiftly to the top of the class. Where they have remained. Nearly 10 years later the updated version has arrived. It’s hard to top a classic but time moves on and there has been some innovation in the last decade to consider.

There are the changes you don’t see: both drivers are new and amp power is up to more than 2kW, with a hefty 1800W available for the 10-inch woofer and 225W for the 1.4-inch HF driver. Maximum quoted volume from the speaker has gone up 1dB to 130dB SPL maximum… and speaking of volume, let me take a moment to tell you what my pair of K10s survives every year. My wildest show is Chopped (dirt drags and bands to match) where they get strapped above the cabin of a tray truck with live bands playing on the back of the truck while it cruises the event… raucous bands with drums, amps and screaming vocals. I remain amazed at how much sound you can get out of a pair of 10-inch speakers without killing them.

What you do see is an all-new design that retains the non-symmetrical QSC look and brings it forward a decade. It’s the same dimensions and weight as the K10 and still made from black impact-resistant ABS but the finish has changed from the distinctive near-gloss look of the K10 to a more subdued matte look. The concave steel grille over the front is a little squarer but the main difference is the cut off rear corner. It becomes the base when the speaker is laid on its side for stage monitor use. This corner has been re-worked and the side handle is now on the angled base section instead of the side of the cabinet. This makes it easier to grab if the speaker is face down on the floor but its wider to carry than the K10.

The floor monitor angle has been increased a few degrees so it rakes up at a sharper angle. This is a good change as the speaker ends up closer to the performer. The chunky protective strips of rubber used to keep the side of the cabinet off the floor have been replaced by four non-slip rubber feet. I like the way the K10 strips wrapped a little way around the side of the cabinet for some extra protection but the K10.2 looks neater overall. 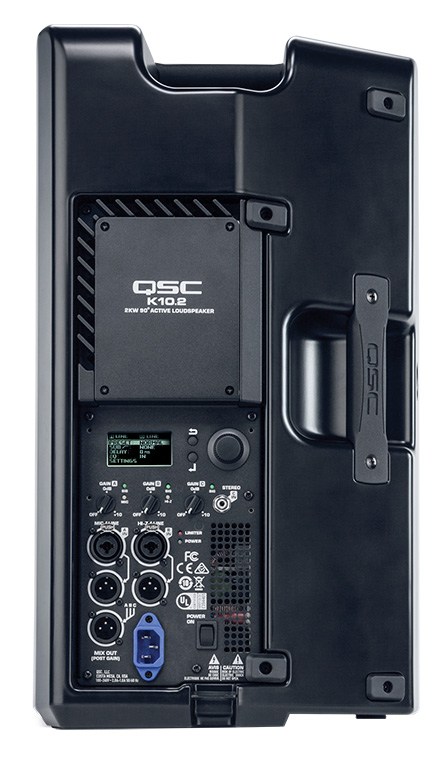 The generously recessed rear control panel of the K10 has been made shallower and smaller as the higher power amp and new low-noise fan have seemingly pushed their way to the surface. The control panel has changed to reflect the times. Retained are the two combo XLR/jack inputs with XLR links and a single XLR mix out. Gone are the switches. The one I miss the least is the sudden-death mic/line switch on Input 1. The preset EQ options on two switches are handy on the K10, and I can find them in the dark, but gone, replaced by a screen and nudge buttons — I’ll get my glasses. To be fair, anything that makes the mic/line switch harder to accidentally engage is good and QSC recognises this by making you confirm your choice before enabling the switch to mic input mode.

The screen also significantly increases the number of controls and options available. The original K10 had a few preset options on a couple of switches, the K10.2 has 11 factory presets. These tweak the speaker’s frequency response and dynamics processing to suit different physical environments or applications. There are settings for live sound, EDM, speech and monitors, both stage and studio. There are settings for using the speaker as a bass or acoustic instrument amp, and settings for handheld or wireless mics.

The delay function is a great inclusion and works for me, I’m often running delay speakers from an analogue desk so it saves gear. Four-band EQ is available but is sensibly limited to cut only, and only up to 6dB at that. These speakers shouldn’t need EQ beyond the broad presets anyway and this minimises the effects of any crazy or accidental settings. Scenes can be saved to store user settings if multiple users are involved.

The K10.2 is easy to use and navigating the screen is intuitive enough. Input 1 switches between line and mic level, via the screen. Input 2 switches between line and Hi-Z, to become a handy high impedance input for instruments with pickups. Input 3 has changed from a pair of RCAs to a stereo 3.5mm minijack. Not sure about this, its sort of more modern but the common 3.5mm to RCA cables are readily available compared to 3.5mm male to 3.5mm male cables, and the reliability of minijack sockets worries me. Commendably there’s no Bluetooth, that really encourages low quality sound. There’s no 48V phantom power on the mic channel either. 48V on the line is nasty when the cable inevitably gets accidentally unplugged while its turned on but condenser vocal mics are common now… there’s a problem looking for a solution.

The technology that gave the QSC K Series its superior quality sound is still there. QSC’s Directivity Matched Transition (DMT) synchronises the HF and LF driver’s coverage angle. Intrinsic Correction keeps the speakers tidy in demanding environments. With new drivers and more power I was interested to see how much difference there was in use, and yes, its new and improved. In an A/B comparison with the K10 the K10.2 produces the same type of warm, clear sound but it’s noticeably bigger. The low-end is fuller, the -6dB LF response is quoted as having improved from 60Hz to 56Hz and this extra depth is particularly noticeable on music playback. It’s louder overall and more resistant to feedback.

The presets add another dimension, particularly if there’s no mixer or drive processing in the system or installation. Dance music on the dance setting sounds full and thumping. For live music shows with mixers the default setting is a flat start for FOH where EQ and compression will come from the desk or drive rack. For foldback, the stage monitor settings use sharp filtering to reduce un-wanted low-end buildup. Setting 1 reduces the boominess but retains strong lows for instruments. Setting 2 cuts more to focus on the vocals. In use I preferred the new, steeper cabinet monitor angle, it kept the performer closer to the speaker so the sound was more direct and used less space on stage. It can also be hung from M10 installation points and M5 yoke attachment points or pole-mounted, horizontally or angled down by 7.5 degrees. The K10.2 is a genuine multi-purpose speaker you could take anywhere. It looks neater and sounds better than the K10. Its more powerful and more flexible in use. Its reputation will be maintained.