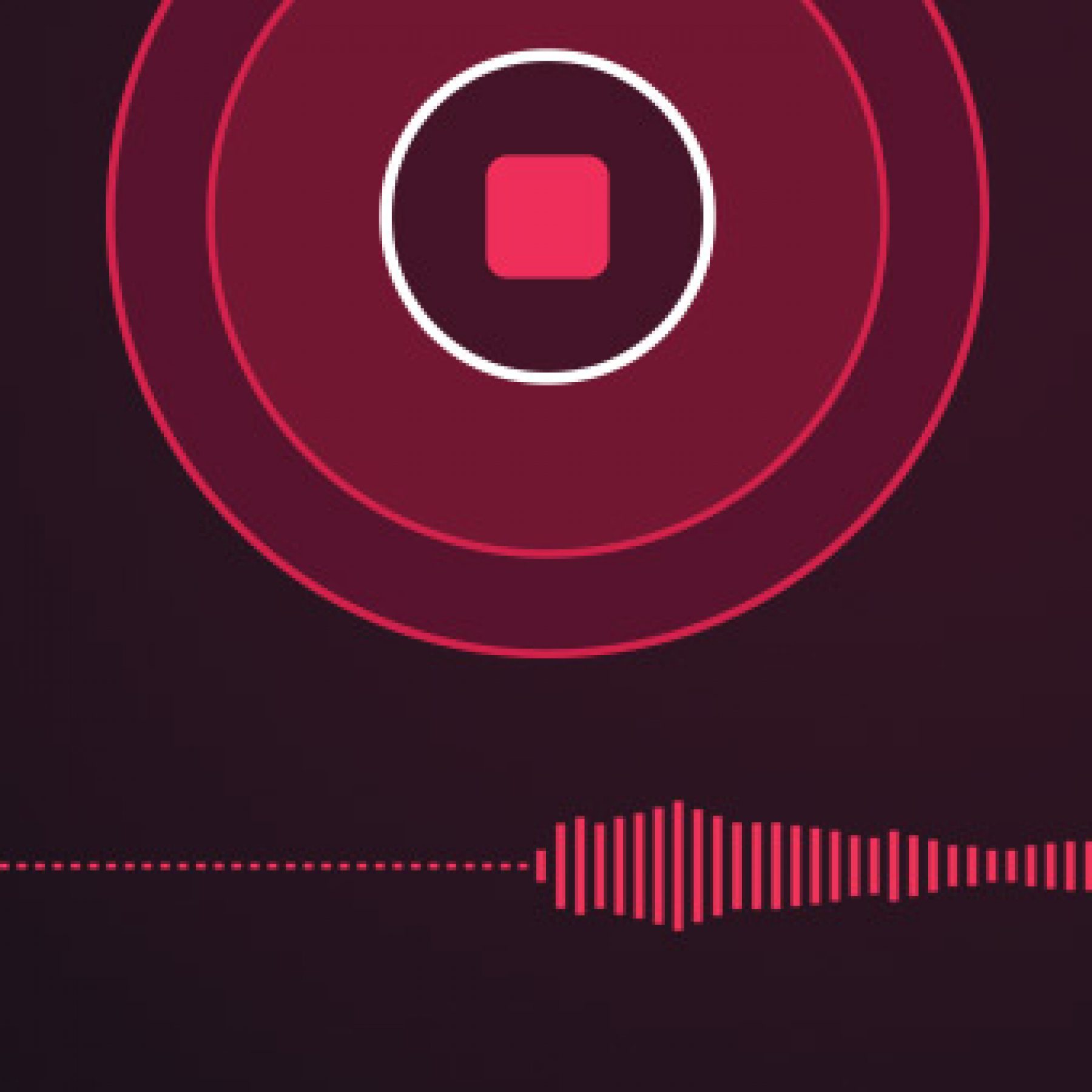 0 SHARE
Read Next: STUDIO ONE V3.2 — CONSOLE EMULATION AND MORE 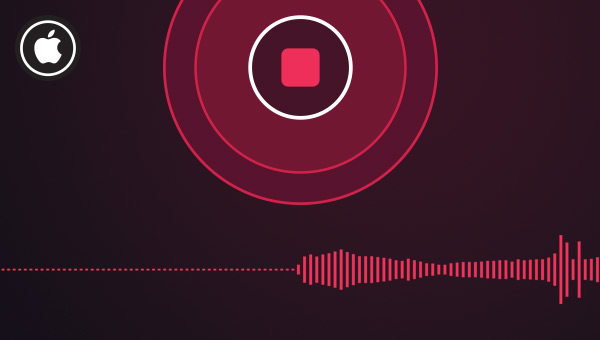 Well I’ll be darned. Apple has cottoned onto the fact musicians are using iPhones to quickly record song ideas on the go. And why wouldn’t you! The phone is constantly by your side; either in your pocket, or within earshot. Or, it’s directly in front of your face while you’re checking on everything happening on Facebook, Twitter, Instagram, Reddit, Flickr, Google+, LinkedIn, SoundCloud, Reverbnation, Yelp, and the list goes on, and on, and on. Blardy blardy bloody blar. In reality (remember that?), you’re without doubt better off jotting down a few melody or lyric ideas than wasting your sanity on any social media platform. I’d best digress. The point is, we’ve all got an excellent recording device on hand every waking hour. 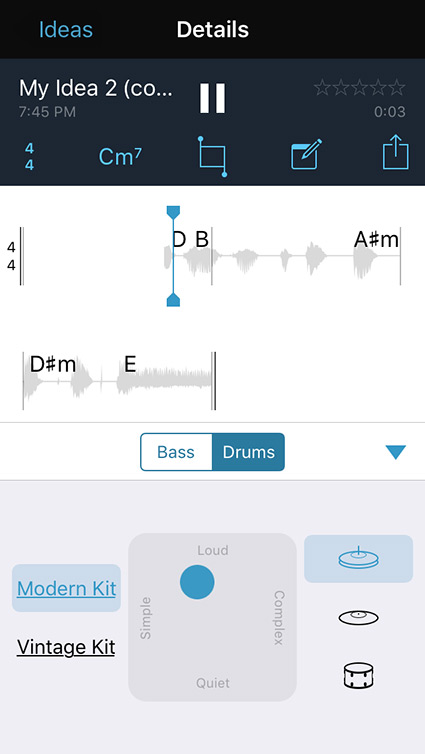 Part of the attraction with a simple recording application like Voice Memos is it’s extremely simple to use. You open the app, hit record, and press stop when you’re done. The files sync with iTunes wirelessly and they’re ready to dissect and reevaluate as soon as you sit down in front of your Mac and monitors. Most importantly, that flash of inspiration you had as the 7:30AM train you were riding to work on — still half asleep after a shower and not enough coffee — somehow created a rhythm on the tracks that made you think of the best chorus ever. That little recorder in your pocket could be the key to getting that hook realised. Otherwise, it’s lost. What’s the chance you’d never think of it again? Pretty high. 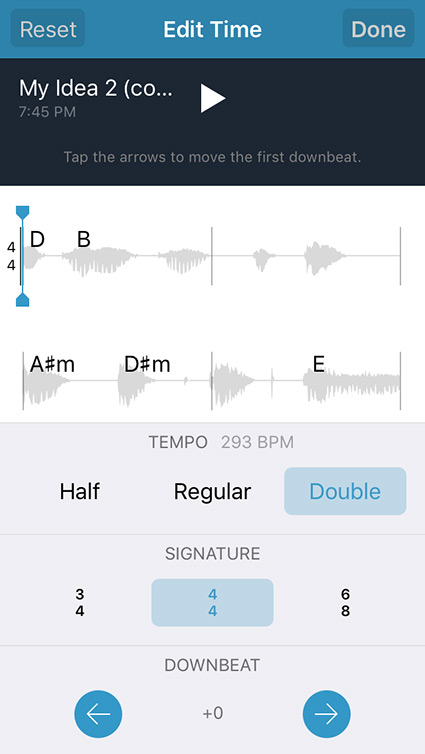 Music Memos, just like Voice Memos, is extremely simple to use. Upon opening the app you’re faced with a mostly blank, dark screen, with a big blue button in the middle. Press the button and it turns red to signify you’re recording. It doesn’t get much simpler. Recording can also be instigated when the app senses a sound, so you can sit back, play, and capture without leaving a huge gap at the start of the recording. Once you’ve recorded your ‘Idea’ (the official nomenclature for recorded takes within Music Memos), it appears at the bottom of the screen as a waveform, and here’s where some hefty technology kicks in to make Music Memos so much more than a mere digital dictaphone. For starters, the waveform suddenly has notes displayed for each sound you’ve sung into it. It’s nutting out the chords of each section you’ve recorded! That in itself is going to make it easy to play it back when you get your hands on an instrument; or for the non-players, simple to bash into a sequence in your DAW of choice. Recognising pitch paves the way for some other tricks which we’ll get to shortly, but before that, categorise your Idea with a tag. These can be any of the provided tag names such as ‘verse’ or ‘chorus’, or add your own tags. You can also rate the Idea from one through to five stars, much like rating tracks in iTunes.

Beneath the waveform are other icons. A trash can for eradicating those late night Ideas that don’t cut it in the morning, a bass guitar icon, and a drum-kit icon. Clicking on the drum-kit adds drums to the recording, and clicking on the guitar adds a bass-line. I kid you not. Music Memos works out the tempo and pitch of your recording and adds drums and bass. Now if you’re not so keen on the backing you can hold these icons and bring up either a vintage or modern drum-kit, and switch between upright or electric bass. You can also alter the complexity and loudness of each instrument, with a matrix style interface borrowed from Apple’s other audio applications such as Garage Band and Logic Pro X. There’s also adjustment of the complexity of cymbals, hats, and kick within the kit. 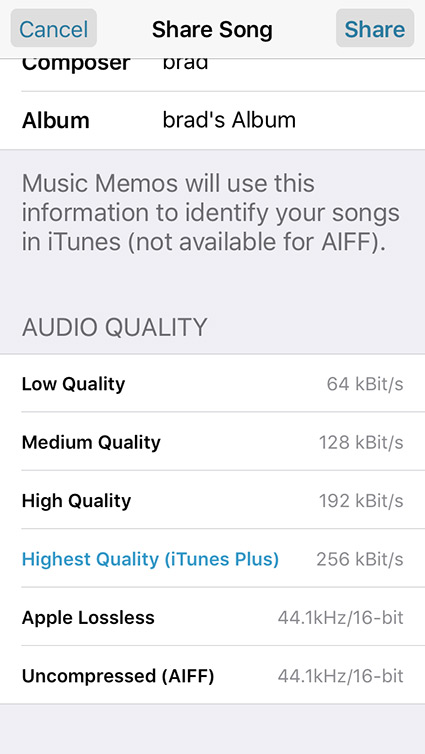 Now if you feel the app has got the bass-line wrong you can edit the chord arrangement to suit your Idea’s melody more accurately. This is done by selecting regions within the recording that have been designated a chord and readjusting. It’s fast and intuitive. Tempo and time signature of the backing tracks is also editable. Half, regular, or double speed, and 3/4, 4/4, or 6/8 time signatures. Plus, you can shift the downbeat of the backing in 1/8th beats to lock in where you need it. Of course recordings can be trimmed, but bear in mind all edit points are selected via transients of the waveform. 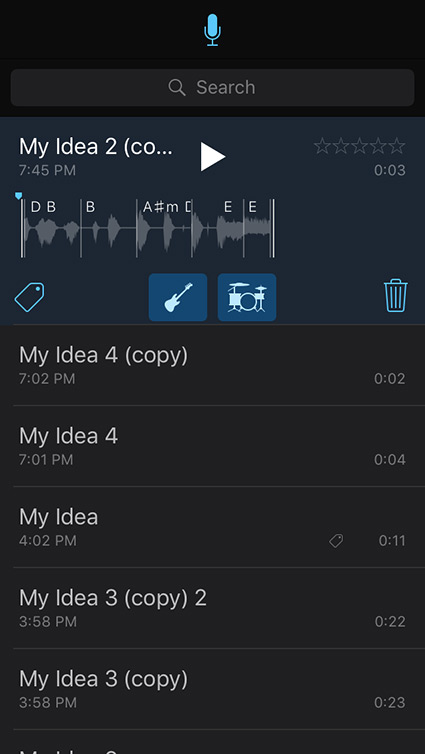 Sharing or exporting your recordings, sorry, ‘Ideas’, can be done via various methods. You can export the files via iCloud Drive, DropBox, shift them over to iTunes, or if you have Garage Band installed on your iOS device, export the Idea directly to Garage Band — as separate tracks with the drums and bass remaining editable. Nice! That said, if you export the Garage Band file to your iCloud or DropBox, these can also easily be imported into your desktop version of Garage Band, or indeed, Logic Pro X. There are a couple of caveats here though. I noticed audio mixdowns couldn’t be exported to DropBox — you have to use iCloud for this. Export formats include .CAF files, various mutations of .MP3, and good old 16-bit/44.1kHz. All in all, you can shunt your Ideas painlessly out to wherever they need be.

Just to round out the package there’s a tuner built in. The tuner is ok, but I have better tuners on my iPhone. I’ll let you be the judge on this one. Music Memos requires iOS 9.1 or later, and an iPhone, iPad 3 or later, iPad Air, iPad mini 2 or later, iPod touch or iPad Pro. For the muso on-the-hoof it’s a must-have. It’s simple, fast, effective, it exports to the rest of the composition ecosystem readily. Best of all, it’s free!