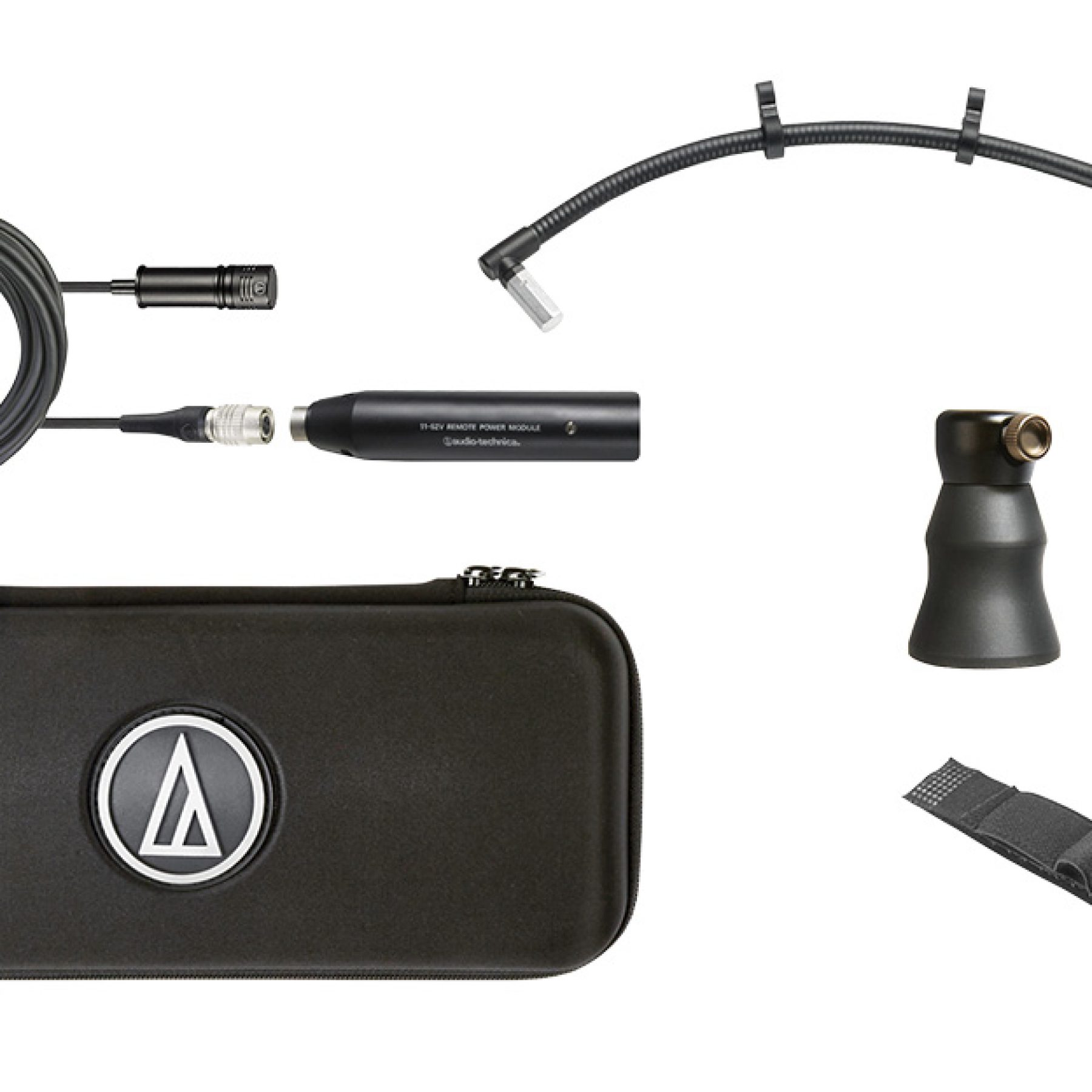 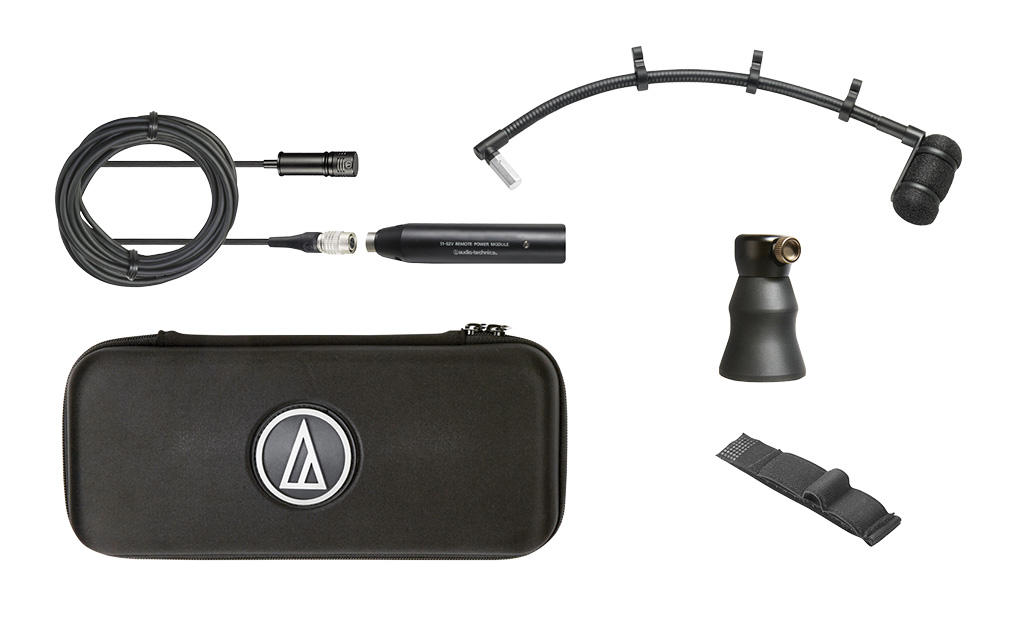 Audio-Technica upgrades its clip-on contender with more mounts than a GoPro.

Capturing the sound of acoustic instruments is one thing, amplifying them is another. Getting them loud and clear on the big stage is one of the more demanding gigs in live sound, especially if you want them to sound real. Some genres plug in with pickups and DIs but these rarely sound natural. Acoustic instruments are rich in fine detail with subtle dynamics and their beautiful, complex sound develops as it leaves the body of the instrument. Time has proven a high-quality condenser microphone is the best way to go. No problem in the recording studio where you can put the mic wherever you want and there’s no background sound but live shows are relatively uncontrolled environments and present special challenges for sensitive condenser mics, even high-quality ones. Gain-before-feedback is usually the first consideration, especially for anything loud, followed by numerous physical considerations including size, weight and placement options.

Audio-Technica has considerable expertise in designing mics for acoustic instruments. It all started in 1991 with the award-winning, Phil Ramone-influenced and promoted, AT4033a large-diaphragm condenser. Over the years this expertise has been used to develop a wide range of excellent instrument mics that have become staples of the acoustic genres. Each model has its own special thing but overall its condenser range is always, and fairly, described as offering ‘crisp and clear’ sound. I would add not overly bright or tizzy, with good low-mid warmth… and well made.

Over the last couple of years I’ve noticed more players using the Audio-Technica ATM350 clip-ons as an alternate to the popular DPA range. They look remarkably similar but are a fair bit cheaper and offer comparable sound quality. The mounting options were limited to an effective UniMount clip mount and a hook-and-loop violin bridge mount. The ATM350a is the new version and features an updated capsule with impressive noise and SPL-handling specs, over-shadowed in some ways by the number and wizardry of the new mounting options. 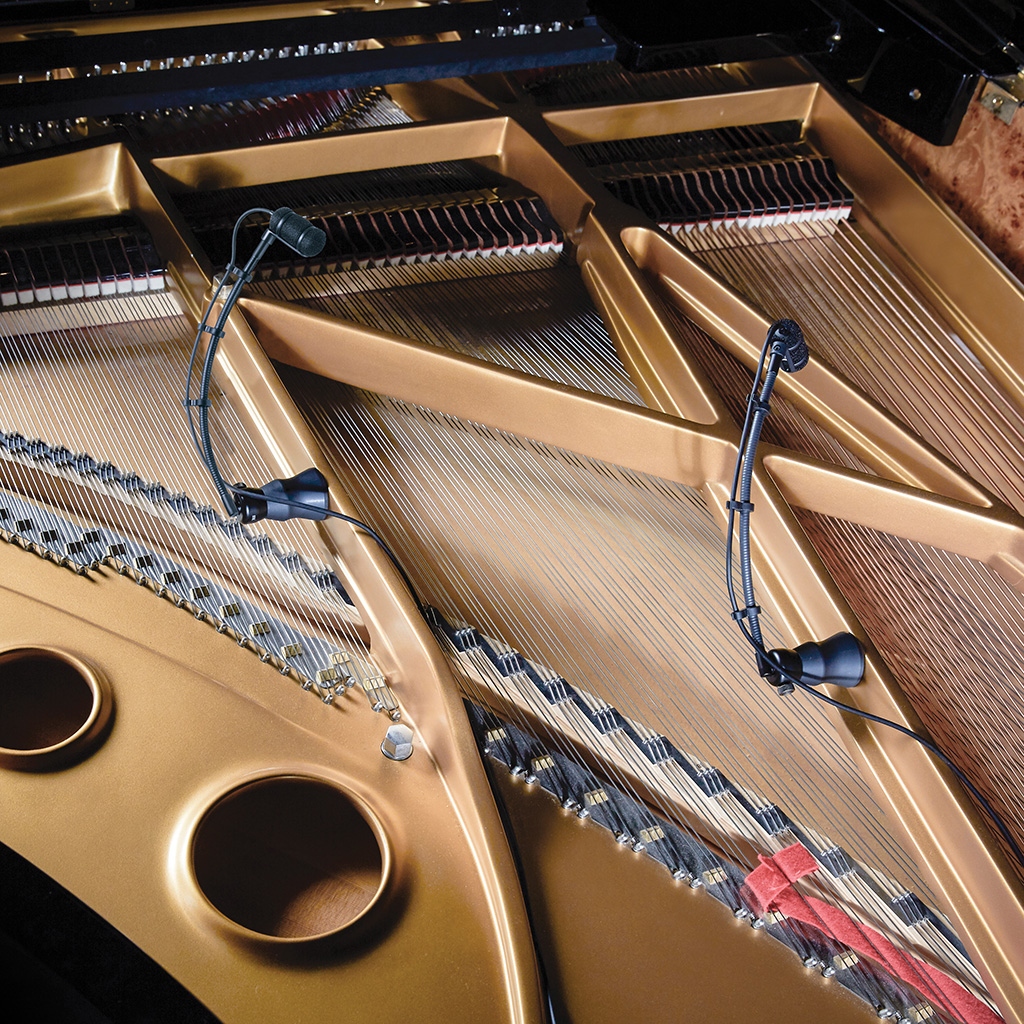 The ATM350a system starts with the mic itself. It’s cute as a button, small but not tiny, and less than 15 grams. In use you don’t see it anyway, once you’ve wrestled it into the protective windshield it will probably live there. The windshield cleverly acts as both a pop filter and shock-mount. With the capsule inside, it mounts into loops on the top of the gooseneck and sits on a protective shelf that’s part of the gooseneck. Effective little clips connect the cable to the gooseneck for neatness and the whole assembly is strong and secure despite its light weight. The captive 4m cable feels soft and hangs nicely. On the other end of the cable is a neat detachable power supply unit with the HPF switch and an XLR socket for connecting to the outside world.

There are two gooseneck lengths — five- and nine-inch — and a hexagonal bar at the bottom of each fits into one of the many mounts. This is when the fun begins. These mounts are a gadget lover’s delight; beautifully detailed and discreetly finished in matte black paint. The AT8491U universal clip-on mount will be the most popular. It’s the general-purpose option, designed to clip onto stringed instruments or the bell of many brass and woodwind instruments. The gooseneck is inserted into the mount at the chosen angle. It looks hexagonal at a glance so I was expecting six possible angles, but on closer inspection it’s an odd shape and you only get four, which is enough, anyway. The gooseneck is secured in the mount with a nicely knurled knob. The jaws of the mount have rubber teeth with a strong bite. Another knurled knob tightens the grip and can really lock the mount onto the instrument, so there’s no chance of it flying off in the middle of even the most frenzied performance. 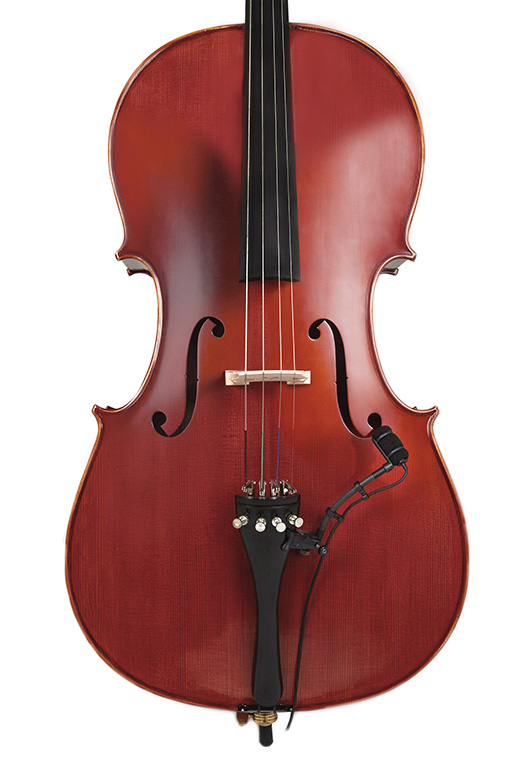 My old friends, My Old Friends the Chocolate Cake (hardly know them, just wanted to say it), were playing at the Theatre Royal and as luck would have it the violin player Hope Csutoros was happy to try the ATM350a. We used the AT8468 hook-and-loop violin mount first. Introduced as part of the previous model AT350 package it’s a Velcro wrap that straddles the strings between the bridge and the tail piece, the mic tucks inside a loop above the strings and points up at the instrument. Simple and quite discreet but it did seem to dampen the strings a little. Next we tried her normal technique, the clip-on mount attached to the violin’s chin-rest and pointing into the upper f-hole.

The sound of the ATM350a was immediately impressive; natural, with an appealing warmth and closeness that brought a smile to Hope’s face and won instant praise from the rest of the band. The perfect reaction for something new. The gooseneck can be used to explore mic placements to find the best combination of tone and volume, and it doesn’t wander once in position. Hope is an energetic performer but no match for the AT8491U mount once it had been locked on. It didn’t fly off once.

The frequency response has been tailored for live use with the deep low frequencies reduced to avoid rumble and limit the proximity effect. The high frequencies have been tamed a little to avoid the 10kHz-ish feedback that condensers sometimes induce, and the 2-4kHz region where live speakers like to take off has been slightly attenuated. Combine this with an accurate off-axis response and the result is excellent gain before feedback. The mic’s great… back to the mounts. 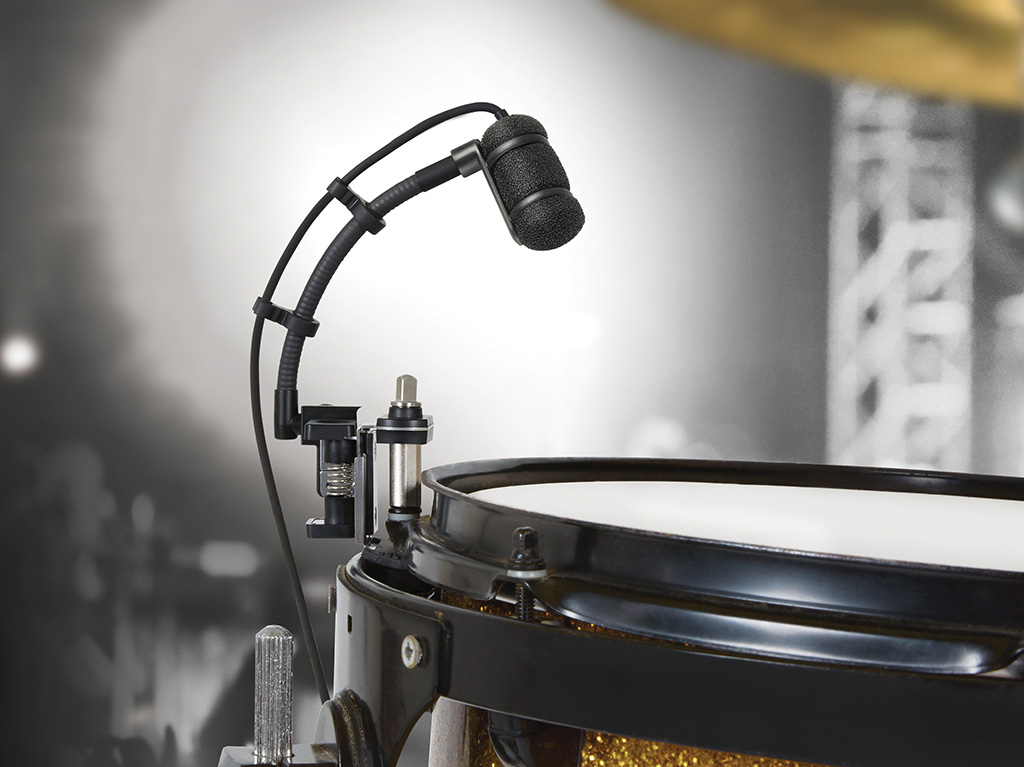 Next up was everyone’s favourite, the AT8491D drum mount, it attracted attention whenever I used it. More satisfying to play with than a fidget-spinner, and a lot more useful, its spring-loaded release attaches onto one of the drums tuning lugs. It’s secure, almost invisible and the mic will stay in the chosen position. I don’t think drummers like having things attached to their drums, it looks weird and those big rubber clips can change the sound. I prefer stands. This mount solves those problems. The clincher is the slip-on tension rod extender so you can still tune the drum with the mount in place. Ingenious.

The first night I used the AT8491D was with some real rock bands. Peep Tempel were the headline act with not an acoustic instrument in sight, so I thought I’d try the ATM350a on the hi hat, since it’s a condenser… but it had no mount to attach it to a mic stand, an obvious omission when Audio-Technica has tried to cover everything else, so I put it on the floor tom. The drummer approved of the mount and was suitably impressed with the discreet placement as well as the way the drum could be tuned with the mount in place. Floor tom for a thrashy rock band is a long way from a subtle violin, and the ATM350a was the opposite of the tight dynamic mic I’d normally use on the floor tom for that sort of band. The floor tom sounded huge and the spill was good too… quite a lot of it, of course, but it blended in for a big, open drum sound. The mic had no trouble with the volume or the full low-end; all in a day’s work, as they say.

The AT8491P piano mount is clever too, it may not be a unique concept but it’s an elegant solution to the problem of how to mount mics in a piano. Looking like the black queen in chess, the attractively shaped mount has a strong magnet hidden in its protective felt base and an integral shock-mount. The magnet sticks to the piano frame and secures the mount. The nine-inch goosenecks are recommended for this application. Even with the longer goosenecks the mounts are strong enough to hold the mics firmly in place and the look is super low-profile compared to two tall boom stands.

The AT8491W is a problem solver designed for woodwind instruments. Examples of mounting problems include the flare on the end of a clarinet being too wide for the basic UniMount jaws, or a flute that may be better captured by getting the mic nearer to the mouthpiece than the end. The AT8491W addresses these problems by attaching a rounded base to the body of the instrument with a hook-and-loop strap that passes through the base and wraps around the body of the instrument. The base has four soft rubber feet that touch the instrument and an integrated shock-absorber above the strap to reduce handling noise. The strap sticks to itself easily so there’s some skill required to get the fitting or adjustment process smooth, but once in place, it’s solid. The mic can now be placed to reach over the end of the flare as you would for brass instruments, or it can be placed to point back up the instrument, towards the keys, for a less aggressive sound, or aimed at the mouthpiece of a flute. Simple but well executed. 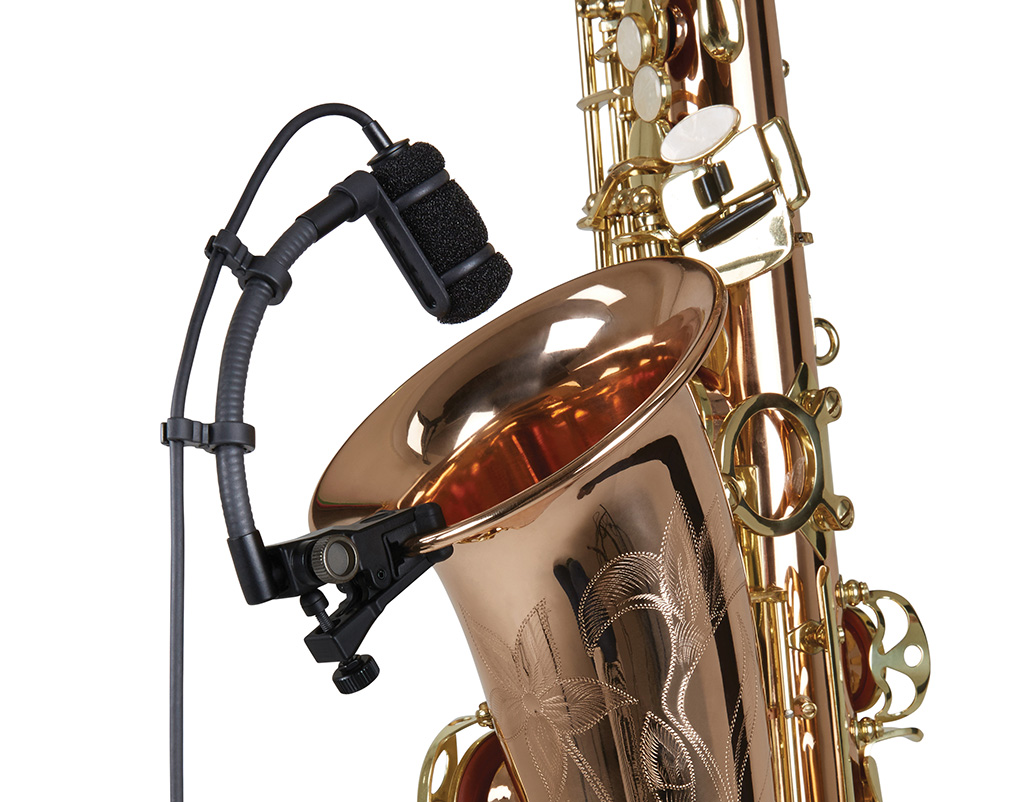 FLEXIBLE AS A GOOSENECK

The ATM350a is an excellent general-purpose instrument mic that will deliver the highest sound quality and robust amounts of gain before feedback in a live environment. Acoustic instruments and percussion have a low average level but can have surprisingly high peak transient levels. They won’t worry the ATM350a with its impressive 159dB maximum input level. The cardioid pattern gives a full and accurate view of the instrument for normal stage use but interchangeable elements are available with hyper-cardioid available for situations where players are very close to each other, and omni-directional for super-accurate proximity-less applications. The mounts let the ATM350a do its best work. Single-instrument players will choose the mount that suits their instrument, multi-instrumentalists may choose several, while venues or production suppliers could get the whole set for maximum flexibility.