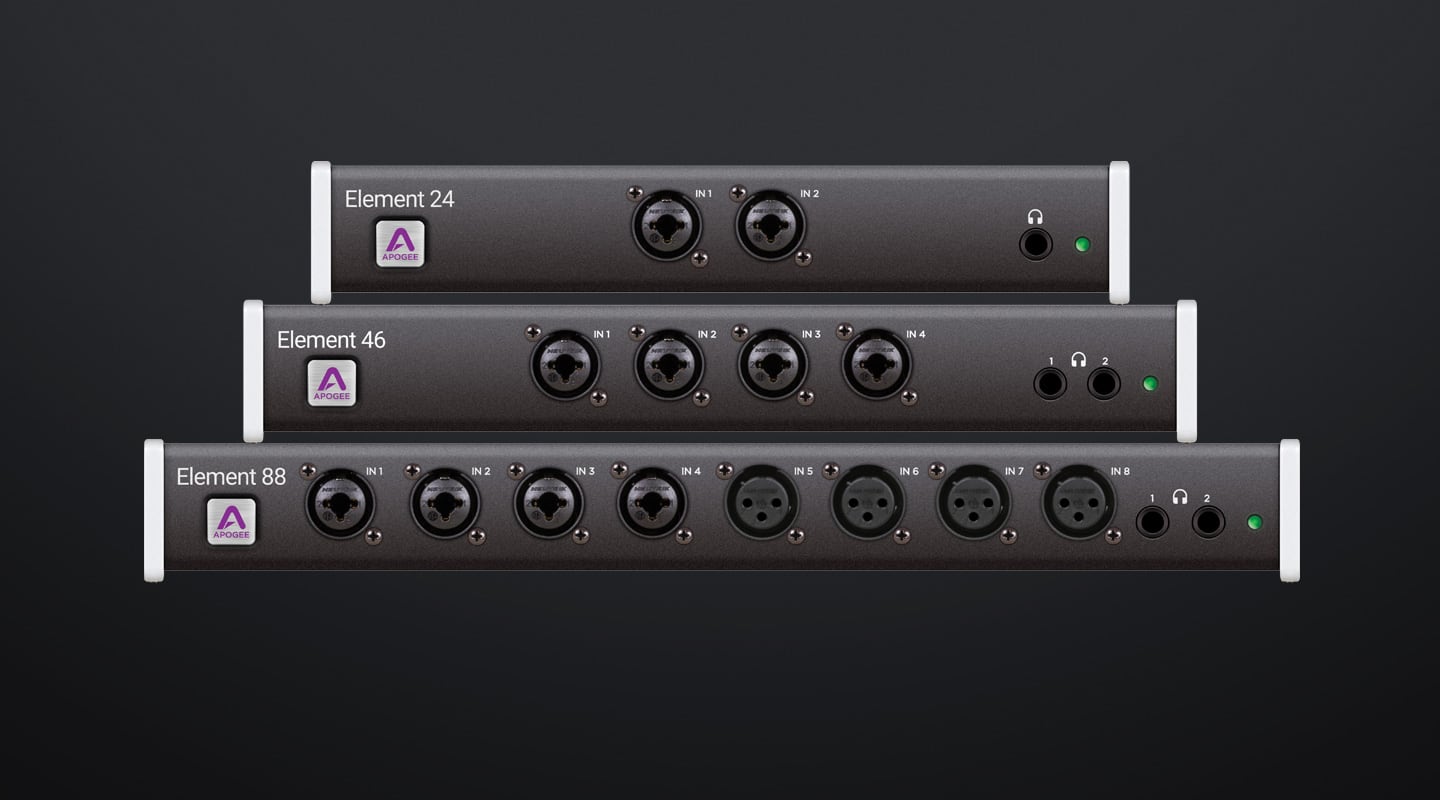 It’s back to basics with Apogee’s newest interface family, delivering an elementary audio experience that doesn’t skimp on the important stuff.

Like Mama always said, it’s what’s on the inside that counts. Solid advice when choosing friends or baking a pie, but it turns out it’s a good philosophy for designing audio interfaces, too.

When it comes to pro audio, Apogee knows a thing or two about making products with high-quality insides. Continually delivering impressive spec sheets has required paying keen attention to every component in the signal path, every time. Apogee does a good job on exteriors too — the Duet and Quartet set standards for interface design.

However, if we had to pick, we’d probably all agree that an interface’s sound is more important than its looks, or even its physical controls. So would you forfeit the latter for the sake of affordability?

In a bid to make top-notch audio more financially accessible, Apogee recently introduced the Element Series; a family of three that claims to deliver no-compromise pro audio standards, yet is disrobed of hardware control and exterior bells and whistles. LCD screens, colourful meters, gain knobs, and phase switch buttons are nowhere to be found. On a per-channel basis, Element is among Apogee’s cheapest offerings — so the loss in aesthetics and control converts to savings in your account. After all, it’s what’s on the inside that counts.

I’d say the Element’s packaging is extremely underwhelming, but having reviewed Apogee’s flagship Symphony I/O Mk II converter last year I think a no-frills unboxing experience is just the company’s style. You won’t get a Thunderbolt cable either, so make sure you budget an extra $45 if you take the Element route.

Like the brown cardboard box, the unit is unassuming — a metal block with a bunch of I/O holes on either side. We received the middle child of the Element family, Element 46, with four XLR/line/DI inputs and two sets of headphone outputs on the front. The rear sports a pair of XLR monitor outputs, optical I/O which covers ADAT, SMUX and S/PDIF, word clock I/O, a Thunderbolt port (yep, just one) and socket for the external power supply. I didn’t expect to like Element’s boring form factor but it’s actually a very nice piece of kit. Rubber strips under the silver bookends help keep the unit secure on a desktop. It’s fairly heavy and sturdy, and you feel comfortable shoving it in a backpack because there are no protruding knobs or scratch-able screens to damage.

While the units appear pedestrian, the specs are the precise opposite. D-to-A conversion has a very respectable dynamic range of 123dB and a ruler-flat response of ±0.05dB from 10Hz to 20kHz. On the way in, the converters give 119dB of dynamic range and a frequency response of ±0.2dB from 10Hz to 20kHz. Onboard mic preamps offer a massive 75dB of gain and all three interfaces can operate at audio resolutions up to 192k. Round-trip latency via the Thunderbolt connection is stated as 1.41ms at 96k with a 32 sample buffer size. Don’t let the boring black exterior deceive you — when it comes to audio quality, Element means business.

Sacrificing all onboard hardware control naturally means you rely heavily on software to take command of an Element interface.  Thankfully, Apogee delivers the goods with an excellent application, though Mac-only, called Element Control. It’s a small download from the Apogee website that takes half a minute to install.

Opening Element Control for the first time revealed a pop up window requesting permission to make Element 46 my Mac’s playback device. It went on to present a number of Element Control templates I could load: ‘Getting Started’, ‘Vocal Overdub’, ‘Direct Monitoring’, and ‘Essentials’ (for control of the onboard analogue I/O only). Naturally I went for the full banana and selected ‘Full Functionality’.

The mixer is extremely thorough and intricately configurable. The Hover Help window displays a little blurb about whatever control your mouse is on — super useful when initially nutting it out. For the Element 46, channels strips are laid out with the four analogue inputs first, then the eight optical inputs (which are displayed as four stereo-linked pairs by default), then five stereo playback pairs for internal routing. You can create up to four independent mixes, one of which is labeled FX Send.

Element 46’s three stereo analogue outputs (Main L/R, HP1 and HP2) can be fed with any of the four mixes, or any of the five stereo playback channels, selected via a dropdown box above each output’s volume control. The Element Control window lets you stack the four mixes so the faders pile on top of each other, and you can tailor the amount of detail in the Element Control window to suit your session.

It all looks and sounds quite overwhelming at first, but spend some time with it and you’ll be building and tweaking low latency mixes with blazing speed. You can also cut the window down to just the ‘Essentials’ if you want to keep an eye on preamp gain and output levels without the app hogging your screen. If you want to do all that while moving around the studio, Apogee’s Element Control Mobile App lets you take the reins using your iOS device.

Apogee knows not everyone would be pleased having Elements’ hardware control stripped in the name of affordability, so the company wisely created an optional control device for Element called, wait for it… Control. It looks like a Big Knob-style monitor controller, but it’s only I/O is a mini-USB port. Eight user-definable buttons on the top panel give you custom access to a range of parameters on your Element interface, while the Mic, Headphone and Speaker buttons dictate the function of the detented central knob. To configure the unit to your liking, you simply hit the Remote Control Assignments button in the Element Control software.

The Control unit certainly heightened the Element experience. Without it, even the most common tweak, like adjusting monitor or headphone level, required either minimising the software to the Essentials pane, or constantly switching between windows. A physical device to control these basic functions really does make a difference, especially when you’ve got a long session.

ALL IN THE DETAIL

There’s something about Apogee conversion that just hits the spot, and all the outputs are high quality. Listening on AKG K702 headphones through the onboard amp, the high end was far smoother than my Focusrite Forte which sounded slightly more brittle. Lows felt firmer and more rich. The soundstage is as wide as it should be, and oh, so detailed. Stereo spread is presented with pin sharp precision and instruments mixed front and centre seem very coherent, tending to poke out of the mix that tiny bit extra than the Forte. It definitely sits atop the prosumer class.

Gaining up a mic for the first time, I was instantly impressed with how quiet Element’s preamps are, even when cranked up to +75dB. The signature Apogee sterility is evident but it’s not a bad thing. It’s a clean sound that’ll match well with pretty much anything. Buy any prosumer interface on the market today and its built-in preamps aren’t going to disappoint, but I’m confident in saying the Element’s pres are among the best you’ll get in a do-it-all box. The Soft Limit option is a nice touch but don’t treat it as insurance for insensible gain setting — it gets ugly if pushed.

The ADAT I/O is an easy way to add eight extra pres. Connecting my trusty UAD 4-710D and Focusrite ISA428 Mk II combo gave a nice palette of transistor, transformer, and tube preamp flavours counting up to 12 inputs — sufficient for most multi-tracking purposes. Don’t forget, if you need higher input counts, Element 88 has eight built-in pres. For even more I/O, hook up two Elements to your computer’s Thunderbolt ports and they’ll work in tandem. Keep in mind you’ll need two ports and two Thunderbolt cables to control the units from the computer, because the units don’t daisy chain. Somewhat frustratingly, you’ll also require optical cables to bridge the audio between the devices, which is not handled by the Thunderbolt stream.

More and more interfaces are appearing with built-in talkback mics. Element cleverly saves this extra cost by hijacking your Mac’s built-in microphone and using it as a Talkback input. I think it’s a splendid idea — if you want to speak to the artist, you’re going to be at your computer 95% of the time anyway. For all other instances, the Talkback source can originate from one of Element’s physical inputs, or from another playback device. The Talkback destination has to be one of the five stereo Playback channels. I routed it to Playback 3-4 and had this channel turned up only in the headphone mixes sent to the talent. Engage the Talkback input using the latch button in Element Control, or its assigned button on the hardware Control unit.

Apogee’s Element Series is about delivering the fundamental requirements — or elements — of high-quality audio without compromise. It does the job fabulously. Conversion? ‘Industry leading.’ Preamps? Well above average. Inputs and outputs? Enough for most small- to mid-sized applications. Latency? Thunderbolt is as quick as it gets. If you’re willing to take an elementary approach to audio, Apogee’s latest offering has you covered. APOGEE IN ITS ELEMENT