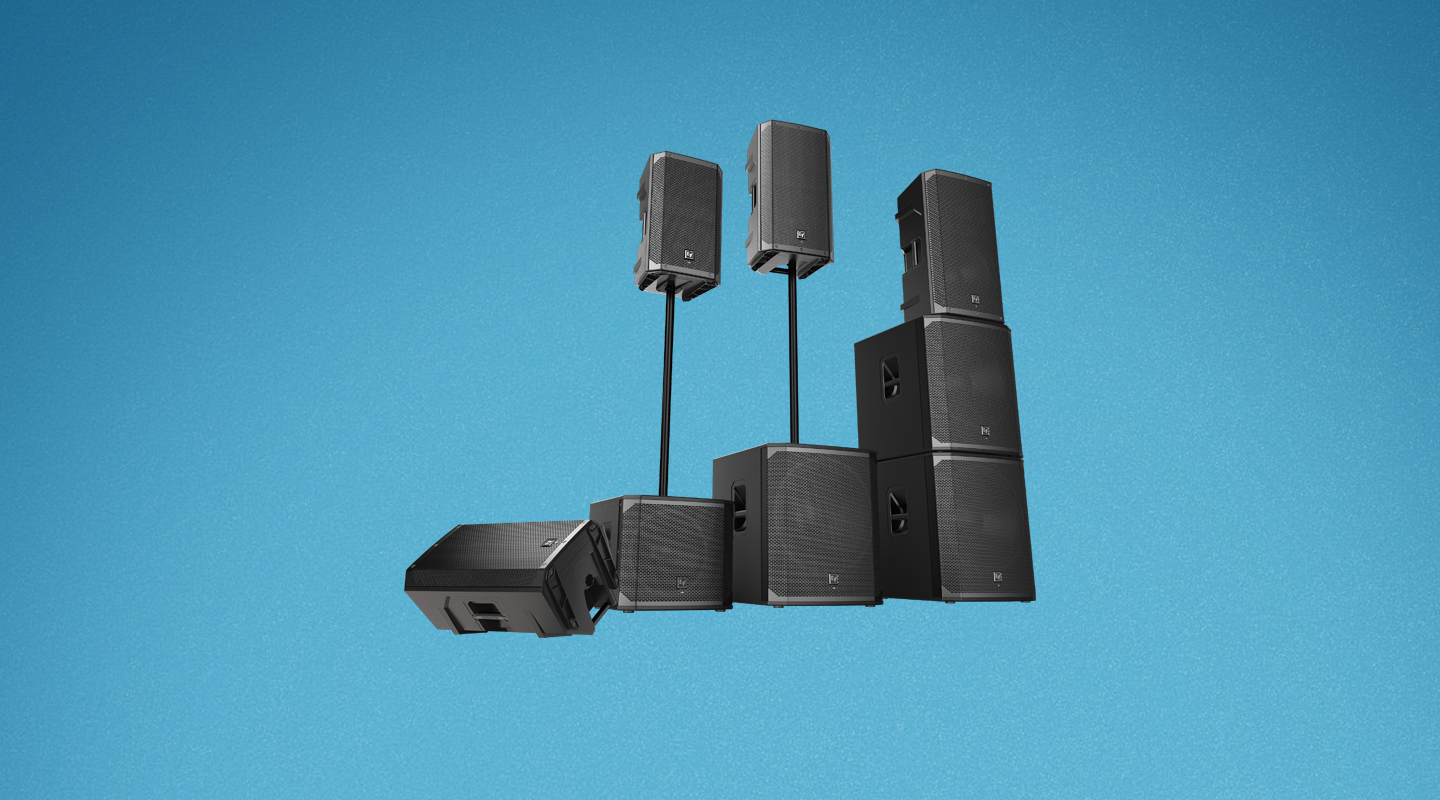 EV finds the smartest fit for its powered speakers.

The market for portable speakers is huge, and Electro-Voice knows it. Rather than trying to devise one plastic box to rule them all, EV has a habit of micro-segmenting; match-making users to their perfect pair.

In all, users can pick from a total of four series, spread out in roughly US$200 increments. The ELX200 series is EV’s latest update to its second tier. It’s not quite as go-lucky as the cheaper and cheerier, plastic-moulded ZLX. Nor is it as buff as the more powerful, slightly more expensive, plywood-bodied EKX series, or the swoon-worthy, top-spec two-kilowatt ETX series. It sits happily at that intersection of casual and semi-pro with a range of features to suit.

The ELX200 series is the first of its powered speakers to incorporate EV’s QuickSmartMobile technology. First available with the Evolve 50 portable column system, it uses Bluetooth Low Energy (BTLE) technology to remotely control up to six ELX200 speakers and it’s a keeper.

The series includes three full-range, two-way speakers in the usual 10-, 12- and 15-inch woofer-plus-horn configuration, and two subs with either 12- or 18-inch drivers. All five models are also available as passive speakers for those with their own amps and processing. The ELX200 series cabinets are polypropylene composite with extensive internal reinforcement and they feel solid and resonance-free despite their relatively low weight. They look like a big plastic box from the back and sides, which they are, but professional enough from the front, sharing EV family looks with the other series. The subs are made from 15mm plywood and finished with EV’s satin, textured EVCoat, and over time they’ll attract less handling marks than the composite full-range boxes.

Handles at the rear of the top and bottom of the cabinets, as well as a side handle is generous and makes for easy grabbing and carrying. The little ELX200-10P doesn’t get the bottom handle but it’s only 13.5kgs so that’s okay. The ELX200-12P is only 16kg and the ELX200-15P only 19kg so they’re an easy one-person lift. As well as the pole-mount the cabinets have moulded feet on the bottom and an angled side that allows the speaker to be used as a floor monitor. Or they can be flown or mounted with integrated M10 fittings and optional hardware.

The ELX200 series uses established EV technologies including SST technology (signal synchronised transducers) that places the LF and HF drivers as close as possible, and in line with each other, for maximum phase coherence. The way the front of the horn flare sticks out over the top of the LF driver is clever. This means the horn waveguide can be quite large, giving better pattern control, and the gap that’s created acts as a bass port. The woofers are the same as those in the higher EKX series with EVS-10/12/15M woofers and a new DH-1C 1-inch titanium HF compression driver. All ELX200 powered speakers have a 1200W peak Class D amp to get them moving.

On the rear of the cabinet there’s the standard two combo XLR/jack input sockets. These each have a gain control knob with the 12 o’clock position as the nominal starting point. Turn left for trimming line level inputs, turn right for cranking up dynamic mics. It’s simple and avoids having those pesky mic/line switches. The available input gain is well set for live use, there’s not enough to get you into trouble and even set to full gain it’s reluctant to feed back with a standard dynamic mic. If you need more gain or want to use condenser mics (there’s no 48V phantom power) then a mixer is recommended. EV has sensibly retained a time-proven pair of RCA inputs and not provided Bluetooth audio streaming. I worry about the quality of the files coming from phones and laptops to start with… no point making them worse. I’m with Neil Young on this one, hi-res files only please. DJs too. A single XLR output socket sends the mix to other speakers.

There’s not a switch in sight on the rear panel. EV’s QuickSmart DSP knob next to the small LCD screen controls everything. Familiar to current EV users it provides access to presets for different physical environments and the user controls. It starts up as the master volume at the last-used setting and acts as an overall volume control that will turn the speaker all the way off, or give up to 10dB of gain at full level. When pressed to expose the menus, the knob controls the mode/location presets and simple fixed-frequency three-band EQ with HPF. The HPF should be used if a sub is part of the system but the on-board EQ is probably only useful as an EQ of last resort, the speakers are commendably flat out of the box, and the response can be optimised by the mode/location settings in the DSP. Also, if you don’t know who’s been using the speaker previously, there’s a risk of unintentional settings because you can’t see that the EQ is active without checking in the DSP menus.

Enter the new EV Bluetooth QuickSmartMobile app and everything changes. Suddenly you can access the presets, gain, EQ, etc from a phone or tablet. The app finds the speakers, identifies them and allows control of up to six of them at a time. They can be controlled individually or as a group with handy level and limiting monitoring, including a warning if overloads are detected. This is a great feature and I expect to see the idea spread. Mixing on a tablet or phone does nothing for me but I sure like being able to tweak the system from out the front.

The ELX200 series uses the same woofer and similar amp/DSP to the higher-spec EKX series and I suspect the main savings to get it into the lower price point has been in the cabinet construction and materials rather than the internals. Plug and play, they arrive ready to go. The overall voicing is characteristically EV; solid, accurate mids, smooth between 1-4kHz, with an accentuated response from around 6kHz. They don’t sound harsh at all but they are somewhat grainy above 5kHz and I found the added high frequencies tended to spit sibilance on some sources. Vocals sound big and bright with good intelligibility, and they’re commendably resistant to feedback.

The meaty power is well-controlled by the DSP and delivers loud, distortion-free output over the vocal range, and they limit nicely if pushed too far. For music playback or live sound, the low frequency response is influenced by the size of the woofer but not by as much as you might think from the size of the speakers. The quoted specs for LF response and maximum SPL are very close across all three models with the 15P being understandably a little louder and a little deeper. The mode/location presets combine to offer a useful range of LF shapes. Most effective are the shapes that cut the low frequencies such as the Speech or Monitor presets. Boosting the low frequencies works up to a point and the Live and Club settings provide good bass depth for music playback and lighter live music. At higher volumes the low frequencies run out of puff before the mid/highs and for FOH duties you’ll need to get the separate subs if its bands you’re mixing.

Aimed at the same bands/DJs/venues as the other series of EV portable speakers, ELX offers better sound than the ZLX series at a modestly increased price but has the big advantage of the QuickStartMobile app that immediately improves the way you control the system. The polypropylene composite cabinet on the ELX200 series will get scuffed up quickly if the speakers encounter any kind of roadie/truck action. Better suited to installs or venues. There’s optional covers available that will help, but a speaker from one of the series with wooden cabinets finished with EVCoat will keep its looks a lot longer.

As front-of-house speakers these are easy to set up, with a strong, clear vocal range that will run loud and won’t feed back in normal use. They’ll fill a small to medium room with a decent level and won’t overload if the input levels get too high. As floor monitors the ELX200 series work well, the horn is not rotatable so you’re stuck with the narrower throw when the box is horizontal on the floor but in use it proved wide enough, and the overall response allows high vocal levels before needing any EQ. The Monitor preset in the DSP effectively trims the low frequencies that often couple uncomfortably with the stage.

Electro-Voice has a series of speakers for every budget and each release gets you something new or improved. The ELX200 series combines high power and performance with light weight and convenient operation. As a bonus the ELX200 series brings with it the new and shiny QuickSmartMobile app that will change the way you control your system.